Parliament Speaker: Georgia won’t Be a Country Where Russia will Be Able to Circumvent Sanctions 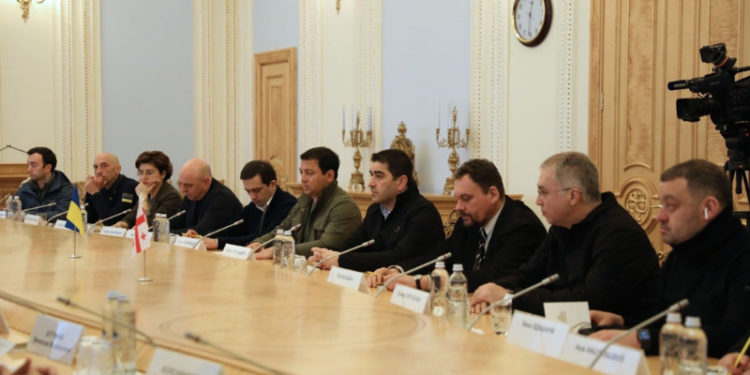 The Speaker of the Parliament of Georgia, Shalva Papuashvili, says during the visit of the Georgian delegation to Ukraine, among other issues, the issues of sanctions against Russia and the spread of misinformation about Georgia were discussed. He spoke about the details of his visit to Ukraine on Imedi TV.

In particular, Papuashvili says, the delegation explained to its Ukrainian counterparts that Georgia automatically joins the sanctions imposed by the international financial sector, because it is part of this sector. Regarding the assistance to Russia in addition to sanctions, the Speaker of the Georgian Parliament notes, he also publicly stated in Ukraine that “Georgia will not be a country where Russia will be able to circumvent sanctions.”

“Regarding bilateral sanctions, I also talked to my colleague [Chairman of the Verkhovna Rada of Ukraine] about whether Georgia has any instrument to do any harm to Russia through bilateral sanctions. I also told my colleague, the whole irony of the situation is that, on the contrary, we have been under sanctions from Russia for years…

“It is important for Ukraine that Georgia is not used to circumvent sanctions against Russia in any way, on which the position of our government is unequivocal,” Papuashvili said.

Speaking during the visit, he highlighted the problem of misinformation, which he said creates misunderstandings between the two countries. According to Papuashvili, Georgia is “particularly sensitive” when it comes to its relationship with Russia, given its history and situation.

“We are particularly sensitive to such allegations and suspicions that there may be some balance, or concessions or side negotiations with us [Russia], which we have unfortunately heard. I think, therefore, it is clear to our Ukrainian colleagues that we are a different country, we are in a different situation, including due to the sensitive occupation by Russia.

“Unfortunately, disinformation is already a problem in the 21st century and especially in times of crisis.

“Stefanchuk agreed that if there were any issues, we should first ask each other, check the information and draw the following conclusions,” Papuashvili said.

At the same time, he added, the “smuggling issue” has already been resolved. (The case concerns the information spread by the Ministry of Defense of Ukraine that Russia is planning to smuggle goods into the country through Georgia, while the “political leadership” of Georgia is supporting the activities of smugglers).

“Overall, this sentiment showed that the misunderstandings that existed were exhausted in the sense that we agreed, there are high risks of spreading misinformation, so all these issues should be checked together. The second is that Georgia, of course, is sensitive to the claims that may be leveled at Russia, and of course we expect everyone to verify the information before making claims against Georgia, and I think we have a full understanding in this regard,” Papuashvili said.