Speaker of Parliament Shalva Papuashvili stated that the Georgian Dream will not attend extraordinary sitting since part of the opposition “is using the Ukraine issue for its domestic political agenda.”

“Of course, they have no desire for unity, it is, among other things, an undignified attempt to make such an important issue of Ukraine, which concerns the security of Ukraine and at the same time, the security of Georgia, part of the agenda of daily mercantile politics. The Georgian Dream faction is not going to allow this,” Papuashvili said.

He noted that neither the extraordinary sitting nor the opening procedures of the sitting will be held today, adding that he was addressed in writing by the parliamentary majority and none of the 82 members of the majority will attend the sitting.

All the doors of the plenary session hall of the Parliament are closed. Consequently, the MPs of the parliamentary opposition, on the basis of whose address the President scheduled the extraordinary sitting of Parliament, are not allowed to enter the session hall.

The opposition is demanding the opening of the plenary hall and the possibility of registration. They remind the ruling team that this decision violates both the rules of procedure of the Parliament and the Constitution of Georgia.

The plenary sitting of the Parliament was scheduled for February 25, at 12:00. The agenda of the sitting was to be the issue of Ukraine and the hearing of the Prime Minister on this topic. 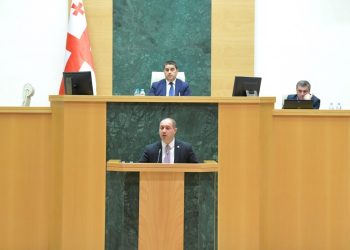