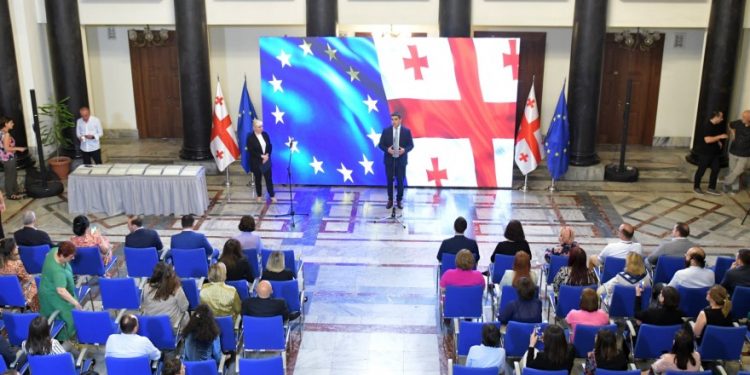 The Speaker of the Parliament, Shalva Papuashvili awarded the Staffers participating in the filling process of the EU Candidate Status Questionnaire and delivered a speech of gratitude for their contribution.

“We achieved a certain stage of the development of our country and in this very moment, the Parliament and the Staffers enjoy the privilege to be the part of this process, especially under the circumstances, when we face the extraordinary situation upon the decision-making by us and the EU. Lots of processes and bureaucratic processes are accelerated and it is crucial that the Georgian bureaucracy, in the best sense of this word, in this decisive moment, demonstrated its capacities to administer and exercise such an essential task,” Papuashvili stated.

He noted, that Georgia had to fill the Questionnaire of almost the same volume as other candidates, while Georgia was also restricted in time – the shortest term amongst other candidates – the country had 4 weeks for this task.

“For four weeks you have been sacrificing your time – 24 hours a day – to due fill the document carrying in mind the highest responsibility for the completion and quality,” Papuashvili stated.

The Speaker of the Parliament emphasized they are proud that the reactions they witnessed from international colleagues are extremely positive and that the document revealed the high professionalism.