Papuashvili: All Perspectives Regarding Current State of Penitentiary Institutions should be Analyzed In-Depth 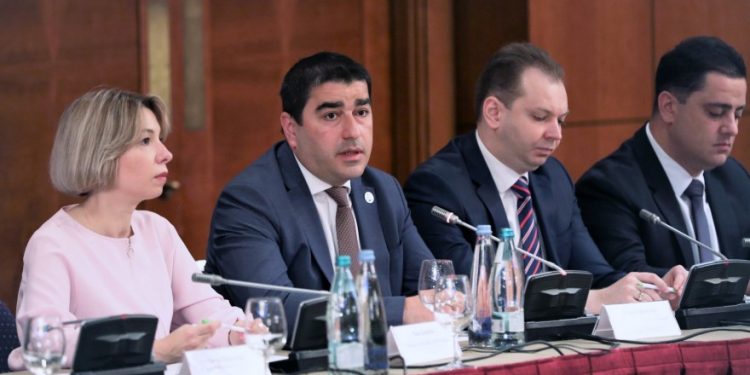 “We will have the chance to talk about the topic of penitentiary institutions from a variety of angles today. It is crucial to understand each viewpoint and assess the current state of affairs in penitentiary institutions. We will also discuss the existing challenges and possible solutions to them,” Shalva Papuashvili the Speaker of Parliament, stated during his speech at the public discussion of the findings and recommendations of the monitoring report of the Council of Europe’s Committee for the Prevention of Torture and Inhuman or Degrading Treatment or Punishment (CPT) on the ad hoc visit to Georgia.

Papuashvili argues that the topic of the discussion and point of view are engaging since they deal with a contentious issue and, in addition, they include reports from the PD and CPT, which he views as a crucial chance to examine the current state of affairs in prisons.

“It is crucial that the prison administration’s systematic practice of mistreating inmates has been stopped, as you said. It is crucial to consider all of these viewpoints today and assess the situation in this regard in penitentiary facilities since challenges related to certain informal hierarchies or structures may emerge,” Papuashvili mentioned.

The Speaker drew attention to the oversight functions of the Parliament and the practice of using relevant supervisory tools.

As he notes the Parliament plans to make relevant changes in this regard as needed.

“After the constitutional amendments and new rules have been enacted and the Parliament of Georgia has been given new oversight instruments, it will be examined how these tools perform and what needs to be improved with regard to the oversight functions of the Parliament. The Rules and Procedural Issues Committee carries out this kind of investigation and analysis. There are several analytical documents in this area, and the Parliament intends to make the necessary adjustments as needed to better carry out its oversight duties, including through working with the PD,” Papuashvili remarked.

“The complete report of the Public Defender has been received; but, because to time constraints, we were unable to address it during the spring session as required by the Rules of Procedure. As I am always in favor of an evidence-based discussion, I can tell you that we will have a thorough and in-depth discussion of this report as soon as the fall session starts. Unfortunately, polarization is sometimes determined in our politics—and not only in politics—by the fact that opinions are expressed rather than facts and evidence. Because of this, the Public Defender’s Report is crucial so that we can evaluate and come to our own judgments on the information gathered by the Public Defender’s Office,” Papuashvili elucidated.

The Public Defender of Georgia, Nino Lomjaria, and the Deputy Minister of Justice, Tornike Cheishvili addressed the participants of the discussion.

The public discussion was attended by representatives of Georgian state agencies, CPT, NGO representatives as well as the international organizations and the diplomatic corps operating in the country.