PACE Co-Rapporteur on Georgia Kerstin Lundgren: Leaving Georgia Out Is a Mistake 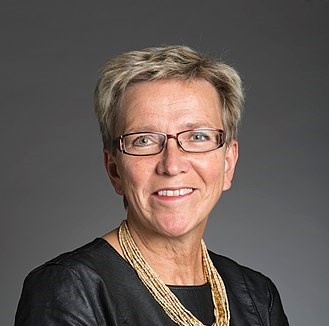 Leaving Georgia out is creating a situation where the Kremlin forces can easily play with and make use of Georgian distrust. Is this the way forward for us? I think this is the worst way to handle the situation, – Kerstin Lundgren, Third Deputy Speaker of the Riksdag (Swedish Parliament), tells RFE/RL. Alongside Boris Tsilevitch of Latvia (2015-2017) and later Titus Corlatean of Romania (since 2018), Lundgren serves as the Parliamentary Assembly of Council of Europe’s co-rapporteur on Georgia.

Unlike the Commission, you don’t consider excluding Georgia a good move. Why?

Well, from my perspective, Georgia was the first country that was hit by Russian Imperial thoughts or behavior, during the 2008 War. And at that time, Georgia felt left alone. The EU wasn’t really going for sanctions [or] for marking a strong position toward what happened. And now we have a specific situation. This is not a common membership application. This is something specific, Ukraine, Moldova and Georgia asking to become members of the EU. I think we should make a decision jointly on the three of them by deciding they are in the same “territory” – all pushed or threatened by the same aggressor. We need to do so if we want to send the message to the people in Ukraine, in Moldova and in Georgia that we are open to their membership, that we are reaching out and are telling them that this is a path for them to take. This is a way of consolidating the work that has been ongoing since the Association Agreement, and it will also be a message to the Kremlin. But if we divide them and leave Georgia behind when the country’s territory is occupied by Russia, it creates a situation the Russians and the Kremlin forces easily can play with and make use of Georgian distrust. Is this the way forward for us? I think this is the worst way to handle the situation. So, for me, it’s an issue of making sure that we are not leaving Georgia behind. It is a tricky way forward for Georgia, as well as for Ukraine and Moldova, but candidate status should be given to all three countries on the same basis.

What is your take on the conditions that Georgia has been given by the Commission to comply with?

There are obvious issues highlighted by the Commission. And I agree, there are things Georgia absolutely needs to deal with. But I don’t think it’s a good idea to make a way forward for the country by leaving it behind, because that could create a feeling of distrust, disillusionment, that could be used by forces inside for their own gains. I’m not sure this is a way to be helpful to the people of Georgia who want to see the Western path followed. It would be better to reach out and give Georgia the same opportunity, but also make sure the necessary changes happen not only on paper, but in reality, because otherwise nothing will move ahead. The way out of this situation would be giving Georgia the candidate status, too, but leaving all those conditions attached, then deciding on further steps based on whether the country fulfills those conditions or not. They already have more conditions than Ukraine and Moldova.

One of the conditions the Commission is asking for is de-oligarchization.

Mr. Ivanishvili has the money, the power, and the connections. And he is part of the ongoing game. I have followed Georgia for quite some time, and, for me, when I was following the election campaigns and political messages and so on, I saw two ghosts in all of them: One of Mr. Ivanishvili and the other of Mr. Saakashvili. I do think it would be a good thing for Georgian society, and for Georgia, to go ahead and leave those big personalities, those ghosts, sidelined or behind; to move forward and find solutions together. But, of course, it’s up to the Georgian people to find a way forward. There have been a lot of attempts, and I know the political landscape has been changing. Hopefully, there elections will be coming up soon that will create a better situation for the country. We saw Moldova had an election that created a better situation for Moldova, and, hopefully, if the agreement on the Georgian election code is fulfilled, we will see the next election giving us a better political situation.

Georgia is a fantastic country, and the Georgian people are fantastic. So I do hope that the people of Georgia will really get the perspective that not only can they become a member of the EU, but also that they are being treated in a fair way. Like the other two applicant countries, Georgia is in a specific situation, with Russians occupying 20% of their territory. And the creeping borderization is an ongoing issue there. Simply put, this situation must be addressed. It would really be a shame if this issue disappears from the agenda, because then, once again, that would mean the EU was looking elsewhere, not at what was going on.