PMC RC stands firmly with Ukraine, supports its sovereignty and territorial integrity, and condemns Russia’s ongoing military aggression. We continue to maintain our long-standing commitment to support Ukraine’s democratic and economic progress. This bulletin provides an overview of the measures taken by the Ukrainian government to support the economy and outline of bilateral financial aid received by Ukraine following Russia’s unjustified invasion of Ukraine on 24th of February, 2022. 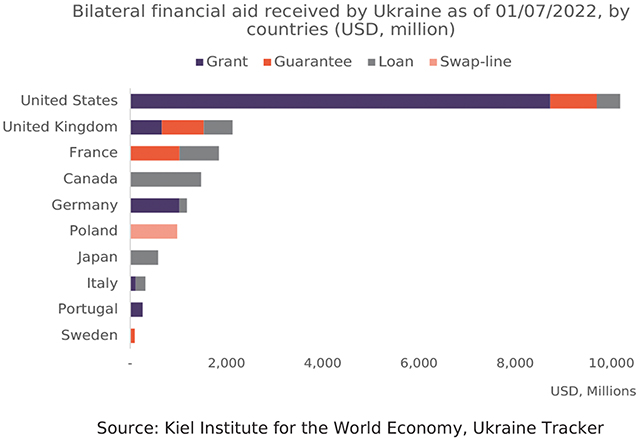 Since Russia’s invasion of Ukraine on 24 February 2022, martial law(1) has been in effect across the whole territory of Ukraine(2). Alongside restrictions on the movement of male Ukrainian citizens aged 18 to 60 from their places of residence, the imposition of curfews and other laws needed to repel the armed aggression and ensure national security, the Ukrainian government has also adopted special laws and measures aimed at supporting business and economic activity in the country.

Table 1 provides an overview of some of those legislative measures, as well as financial support programs initiated by the Ukrainian government in an attempt to support the economy during the war. Recently, the Ukrainian authorities have presented Ukraine’s National Recovery Plan(3) and, while it is indeed important for the government to have a plan for Ukraine’s post-war reconstruction, it is also crucial to analyze what instruments the state is using now to survive the war economically and to safeguard business activity, primarily of SMEs. 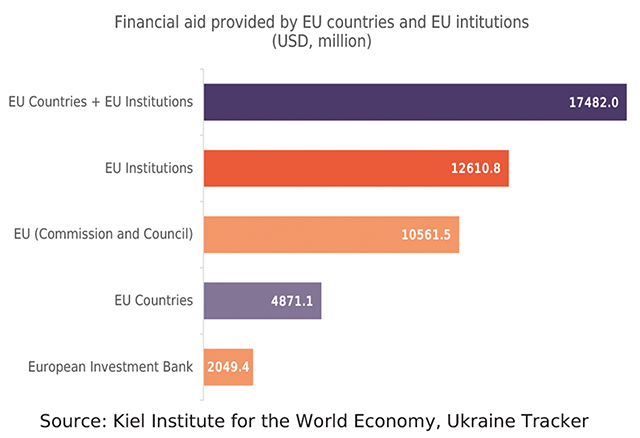 The Ukrainian government’s economic policy measures in response to the war can be grouped into three areas: Business support, Monetary regulations and Labor support. It should be highlighted that to increase the effectiveness of implementation of the measures in all three areas, the state has been actively using available digital technologies. Many of Ukraine’s digital government initiatives, and especially the digital public services app Diaa(4), which became crucial in the provision of access to state support services and funds, have proved useful during wartime and made the state measures more effective.

To ensure the resilience of the wartime economy, a significant portion of assistance has already been provided to the Ukrainian government by partner countries and international organizations. Currently, as Ukraine is at the first stage of its recovery plan, also referred to as the “wartime economy” or “urgent/resilience” stage, the total funding needs for 2022 are estimated at $60-65 billion.

The types of partner financial assistance needed for this stage include defense, emergency budget financing, rebuilding of destroyed housing and infrastructure, and enablement/de-risking of private investment. Currently, some of the required funds have been provided for the defense, security, and macro-financial stability of Ukraine. 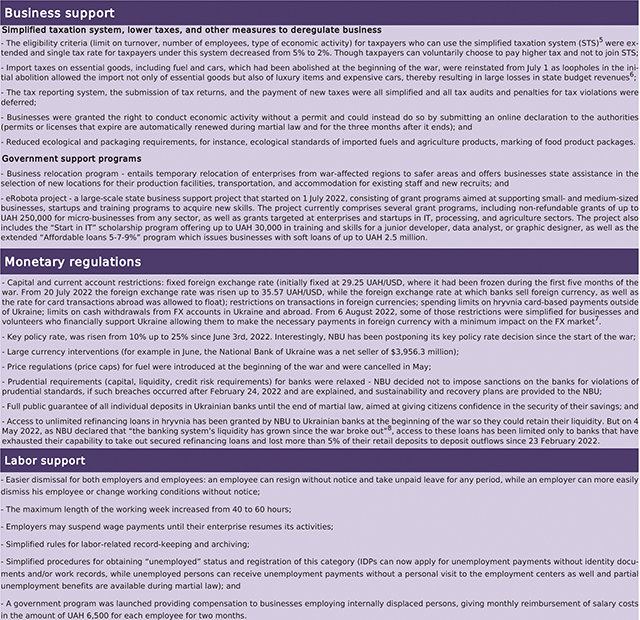 Throughout the first five months of the ongoing war, both governments and international institutions around the world committed tens of billions in USD to support the country. By July 2022(9), Ukraine had received bilateral assistance of approximately EUR 76.7 ($78.5)(10) billion from western countries, of which $29.8 billion was in the form of financial aid.

Among donor organizations, the already-made contribution of the World Bank Group has been the highest and amounted to $2.4 billion, which was part of the initially estimated assistance of $3 billion. However(12), under the “Public Expenditures for Administrative Capacity Endurance in Ukraine” project, additional financing for Ukraine was announced by the World Bank on 7 June ($1.5 billion) and on August 8 ($4.5 billion), modifying the initially estimated $3 billion and forming part of a total support package of over $8.5 billion.

The World Bank was followed by the IMF(13), which in total allocated EUR 2.1 bln of financial aid to Ukraine, out of which a Rapid Financing Instrument (amounting to EUR 1.4 bln) was agreed to less than two weeks after the invasion. The European Bank for Reconstruction and Development (EBRD) has also been among the top sources of financing to Ukraine, in total providing financial assistance of $1.9 billion.

Despite the financial efforts and commitments made by international institutions and countries, the need for funds for the recovery and development of Ukraine exceeds the assistance thus far given. According to the National Recovery Plan, for the ongoing “resilience” stage, additional funding is still needed to initiate the following 15 national programs identified by the National Recovery Council to ensure the resilience of the wartime economy, post-war recovery, and the development of a new and modernized economy:
1. Strengthen defense and security
2. Strive for EU integration
3. Re-build a clean and safe environment
4. Strengthen integrated energy system resilience and support the EU’s zero-carbon energy transition
5. Boost the business environment
6. Ensure emergency funding and competitive access to funding
7. Secure macro-financial stability
8. Grow value-adding sectors of the economy
9. De-bottleneck logistics and integration with the EU
10. Recovery and upgrade of housing and regional infrastructure
11. Recovery and modernization of social infrastructure
12. Improve the education system
13. Upgrade the healthcare system
14. Develop culture and sports systems
15. Secure targeted and effective social policy

The total funding needed to accomplish these National Plans is estimated to be $750 billion, with international partners expected to contribute two-thirds of this sum. Apart from partner grants, the types of funding needed to achieve the main objectives of Ukraine’s National Recovery Plan would include partner debt, partner equity, and private investment. Therefore, according to the National Recovery Plan, the partner countries and international organizations are expected to further increase their funding of Ukraine in the near future.

Footnotes:
1 According to the President’s Decree “On the Introduction of Martial Law in Ukraine” and the Resolution of the Cabinet of Ministers of Ukraine on “Issues Related to the Introduction of and Ensuring the Implementation of Measures of Martial Law in Ukraine,” this entails a special legal regime, which grants military authorities the powers (either independently or together with other relevant state bodies) to adopt special legislation in various areas.
2 On 17 May 2022, the President’s Decree “On the Extension of the Period of Martial Law in Ukraine” extended the period of the martial law regime until 23 August 2022, but it can be further extended unlimited times. Martial law terminates in case of expiration of its period or adoption of the President’s decree on the termination of martial law
3 Ukraine’s National Recovery Council introduced “Ukraine’s National Recovery Plan” during the conference in Lugano on 4-5 July, 2022.
4 Diaa portal, available in forms of web and mobile application, and allowed online access to over 50 publice services. More on Diia app can be found at: https://ukraine.ua/invest-trade/digitalization/
5 Source: https://financialpost.com/pmn/business-pmn/ukrainian-parliament-restores-import-taxes
6 In Ukraine, the enterprises and private entrepreneurs that use the simplified tax system (STS) pay a special tax (single tax) that replaces some of the other taxes and fees – corporate income tax, personal income tax and value-added tax (VAT).
7 For more information see: https://new.bank.gov.ua/en/news/all/natsionalniy-bank-zdiysnyuye-kroki-dlya-pidtrimki-diyalnosti-volonteriv-ta-biznesu
8 Source: https://new.bank.gov.ua/en/news/all/utochneno-poryadok-nadannya-kreditiv-refinansuvannya-dlya-pidtrimki-likvidnosti-bankiv
9 Source: ttps://www.ifw-kiel.de/publications/kiel-working-papers/2022/ukraine-tracker-17204
10 For the simplicity throughout the text the values provided in EUR will be exchanged in USD with a rate of EUR 1 = USD 1.0234 (9 August 2022, European Central Bank)
11 Source: https://www.euronews.com/next/2022/03/21/ukraine-crisis-poland-cenbank
12 Source: https://www.worldbank.org/en/news/press-release/2022/08/08/world-bank-mobilizes-4-5-billion-in-additional-financing-for-vital-support-to-ukraine
13 Source: https://www.imf.org/en/News/Articles/2022/04/21/opening-remarks-by-the-managing-director-ukraine-roundtable-april-21-2022#:~:text=The%20IMF%20has%20played%20its,direct%20financial%20assistance%20to%20Ukraine.