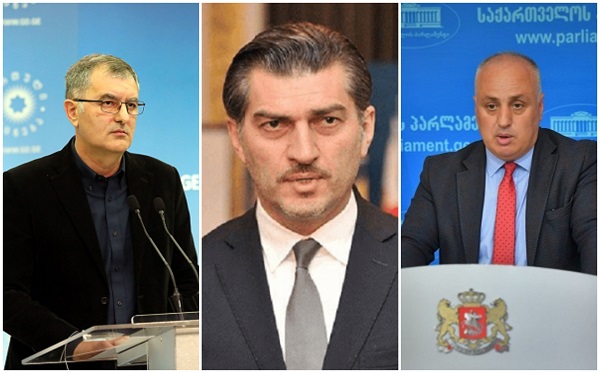 Members of the Parliament Sozar Subari, Dimitri Khundadze, and Mikheil Kavelashvili wrote an open letter to US Ambassador to Georgia Kelly Degnan noting over two weeks ago they addressed Degnan with an open letter providing the questions subject to the special interest of Georgia society, adding that, unfortunately, they never received her response.

“We would like to once again elucidate that by asking certain questions we chased not the goal to attack the USA but to protect its positive image and reputation. We strived to prevent the Georgian society from losing its trust in the strategic partners and even doubting that the USA aims at the return of the National Movement to authority and open the second front in Georgia to better restrain the Russian military aggression in Ukraine. We believed that the trigger of such doubts would drastically prejudice the high trust in the Western institutions, which has been enhanced by the Georgian Government for years. And it was the ultimate goal we chased – to prevent the undermining of the public trust in the USA and also to prevent the reputational damage of the Western institutions. That’s why we considered it our duty to ask certain questions and expect clear answers instead of insults.

Once again, let us remind you of the context of our questions:

Whether you dissociated from the Georgian radical forces, their foreign lobbyists and the rhetoric of the Ukrainian officials directed to the opening of the second front in Georgia (we are not determined to list the direct or indirect calls and statements by Gigauri, Lomjaria, Usupashvili, Margvelashvili, Chergolesivhili, Chiaberashvili, Mshvildadze, Sanaia, Podolyak, Arestovych, Honcharenko, Danilov, Arakhamia, Kasyanov et. al. aiming at the conception of the war idea in Georgia; we are not recalling either the gravest provocations related to the imposition of the sanctions and dispatch of the volunteers or the recall of the Ukrainian Ambassador by Zelenskyy); Mme. Ambassador, you accused us of forging the facts, though all the statements we have mentioned have been made publicly and broadcasted by the media. By not answering our questions, you made us conclude that you never dissociate from the war rhetoric but even encourage it with your principal decision. And your demonstrational meeting with Nino Lomjaria after our open letter constitutes true evidence of this fact. Even Lomjaria confirmed this logical conclusion of ours when stating that the meeting with you aimed at the open expression of your support to her. By meeting with Lomjaria, you openly told the Georgian society that you prefer the bombarding in Georgia to the refusal of Georgia to impose the sanctions. We predict you will meet your other favorite, Eka Gigauri tomorrow, who has also clearly expressed your position stating that “Russia loses the war in Ukraine and lacks the resources, so it will be unable to spread the military actions in various directions and thus, we shall do our best to use this window of opportunity”. Let us also remind you that a couple of days ago you have made an important statement – “it is important as never for Georgia and Ukraine to unify against the Russian aggression”. Against the background of the open support of the war rhetoric, this phrase puts a final enhancement on our belief that you supporting the campaign by the radical forces express not your political partiality but the pre-plotted plan;

Another question was about the Bakuriani meeting – we wanted to know whether you dissociated from this meeting, where the radical opposition and its NGOs and media were trained by the American Peter Ackerman on the organization of the revolution. We also wanted to know whether you dissociated from the demand later issued by the Bakuriani meeting participants on the resignation of the legitimately elected Government and the formation of the so-called technical authorities. The answer to this question was of particular interest of our society providing that most of these people raising this demand are financed by the American taxpayers. However, you have never answered this question, which we perceive as a fact that unfortunately, you are solidary to the Bakuriani meeting and support the resignation of the Government and formation of the so-called technical authorities;

To sum up our letter, we may conclude from your statements and silence that:

And since you have an ambition to actively get engaged in Georgian politics and jurisdiction, naturally, you shall also realize your due accountability to the Georgian society, though, you preferred to engage the press speaker of your Department of State than answering our legitimate questions. And when you avoid the legitimate questions by MPs elected by the Georgian people, you thus prohibit us from hearing the truth and strive to make us silent, which is a clear exposition of your attitude to our sovereign state. True partners that respect the friend nation, state, its sovereignty and institutions never behave this way. At that, the fact that the press speaker of your Department of State was designated to protect you, reveals yet another piece of information to us – everything you do constitutes not your personal decisions but the current strategy of the US Administration towards Georgia. The same is for the second front; naturally, it would be the greatest relief for Ukraine to engage Georgia in the military conflict. We witness you, on a daily basis providing Ukraine with a weapon since neutralizing the military privilege of Russia in Ukraine is your principal and key task.

Besides, we understand that the second front would further undermine the image of Russia, which would maintain the motivation for the European countries to provide Ukraine with aid. However, when you chase this goal you shall dare to openly declare it to the Georgian people and give them a choice instead of forcing or convincing the Government in backstage. Moreover, we possess detailed information about your conversations in certain offices, though we abstain from disclosing the details.

Also, we appeal to Ivanishvili to reveal the information to the society about his meeting with you after February 24, the initiator party and the subjects discussed. We cherish the hope that the Georgian Dream will keep protecting the positions and prevent the country from engaging in the war, which might be of preference for global purposes but poses only total destruction to our country. However, to prevent even the minimal risk of this scenario, we need to be maximally active and reveal the truth to society.