Once Again of Our Ex 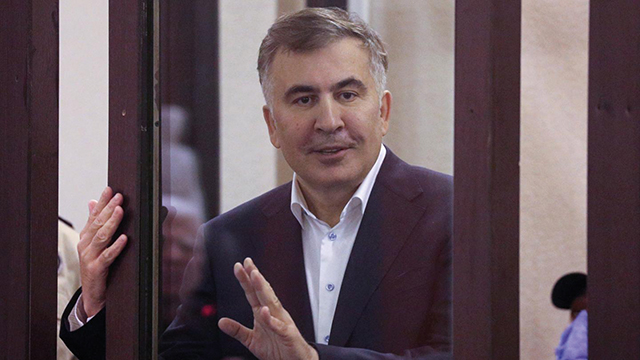 Telling the story of Georgia’s third president, there is always a chance doubletalk might follow, because he has truly become the subject of the most controversial discourse this nation has had in the last 30 years. Fate would have it that this talented but extraordinarily conceited and self-centered young man, having confidently controlled even the slightest rustle in the air during his term of office, is now doing time as a trivial wrongdoer.

A culprit is a culprit, but because he ruled the nation for nine years, his dedicated aficionados are doing their nervous utmost to persuade our society that he should get special treatment, including immediate release from confinement, thus saving his health and rescuing his prestige. This is why even a word about him can trigger an outpouring of talk of any content and magnitude.

On the other hand, things about the still politically-active and sharp-tongued Ex need to be put straight. The strident motley opposition to the current government of Georgia are saying that the distinguished prisoner is very sick, and the jail infirmary cannot serve as an appropriate spot for improving his health, given his current medical condition, so he “has to be moved to one of the best European healing centers without delay,” otherwise, they say, the nation will be faced with the enforced death of its third chief executive and compelled to carry the weight of the ensuing embarrassment forever. In turn, the government tells the discomfited public that the man is doing well enough to continue with his imprisonment and should listen well to his dieticians and accept the new living conditions he has, not very accidentally, found himself in.

Meanwhile, there are myriad convicts in Georgia’s penitentiaries that are sicker than the Ex, but requests to set them free due to illness are few and far between. The question pops up here as to whether the former president of the country should be entitled to any special treatment while incarcerated, or not? How much freedom does the functioning law give the authorities to act in cases like this? There must be some international experience dictating to the Georgian government the way it should behave when it comes to former heads of the nation. There are, after all, hundreds of former ‘Number Ones’ out there, who are doing time, like our own Ex, in their respective lands.

Even if the transfer of our Ex to one of the best European clinics became feasible, how would it be handled? Should Georgia find enough financial resource to let a convoy go with him? If yes, how many of them will have to accompany the Ex to make a round-the-clock service available to him? How about their board and lodging? And most importantly, how long should the treatment last? Could some kind of an agreement be made between Georgia and the recipient country on the issue? It all seems totally absurd.

Let’s have a quick look at a different version of possible action: if the famous Ex is granted amnesty by the president of the country, how many people of Georgia’s four million population would go for it? The situation is more than plainly complicated: you keep the guy in jail, the opposition will continue barking at the government until it becomes hoarse; you free him, and the governmental electorate will dwindle away in a twinkle of an eye.

Who on earth could have predicted how much of a nuisance the hapless Ex’s return home would trigger? But the mess has to be fixed. It can’t go on like this forever. It’s all very complicated, but it is simple too: let the pertinent international organizations come up with a reasonable proposal, so that keeping up the national legislation and the law enforcement system of the country are guaranteed to remain intact. Anything other than this might bring the republic to another collapse with all its expected consequences. This is all déjà vu though, and we need that like a hole in the head.