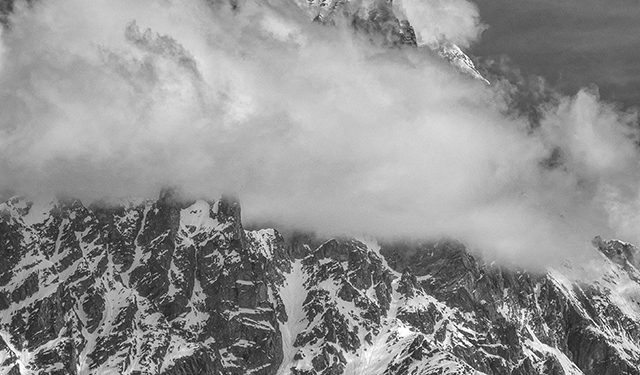 There might be much worse things to be gripped by and want to explore from as many angles as safety allows, in all seasons. My muse remains Mt. Ushba.

I have got used, over the last two-odd decades, to expecting the Mountain to be at its most visible in the morning, often shrouding itself in cloud by midday and seldom reappearing until one or more mornings later. However, recent trips towards and through the village of Becho proved me very wrong.

The first such jaunt happened when I was rather overwhelmed with running the shop in our home during my wife’s absence in Kakheti and Tbilisi. Ice cream was flying from the freezer faster than we could re-stock it, and I needed a break from people. No offense, people, from this introvert.

I packed my camera gear into the new 4×4 mid-afternoon, and headed off to Becho, whose crowning glory is Ushba, visible from almost the whole long village, while Etseri has to make do with glimpses from here and there. (Our guest house is bereft of the Presence, for example, although a walk of 5-10 minutes will bring it into view.)

My first excursion that day took me to the abandoned Becho hamlet of Guli, where a young walking partner and I spent our 2nd of 17 nights a couple of summers ago on a grand circle tour of Svaneti on foot. This time I drove there, having proved to myself that I could also walk. The road is rough for the last few km, but doable in a vehicle such as my Rav4. The Mountain did not disappoint, offering new glimpses through old stone window-frames and a river running below it.

Then I gave a ride back down to a local cowherd, relative of my Svan blood brother, and he offered to show me the location of another lake, one I had heard of but not yet seen. So, another bad but navigable side road. We did reach the lake (more a large pond), in which he proudly pointed out to me the trout fingerlings waiting to be caught or grow up a bit first. But Ushba was absent from the scene, hidden behind a high ridge. What good is a reflecting pool with nothing to reflect IN it, I didn’t say! He suggested that we take the last bit of road to the other side of the ridge, back into view of Ushba’s base.

This road I had already been on, although not driving myself the first time. I knew that there was another pond where we would stop the car, and my only other time up there I had spent another couple of hours trekking farther up, as high as I dared before safety considerations for this non-mountaineer took over. Great shots did ensue, that time and this. Ushba once again did not disappoint, even so late in the day. 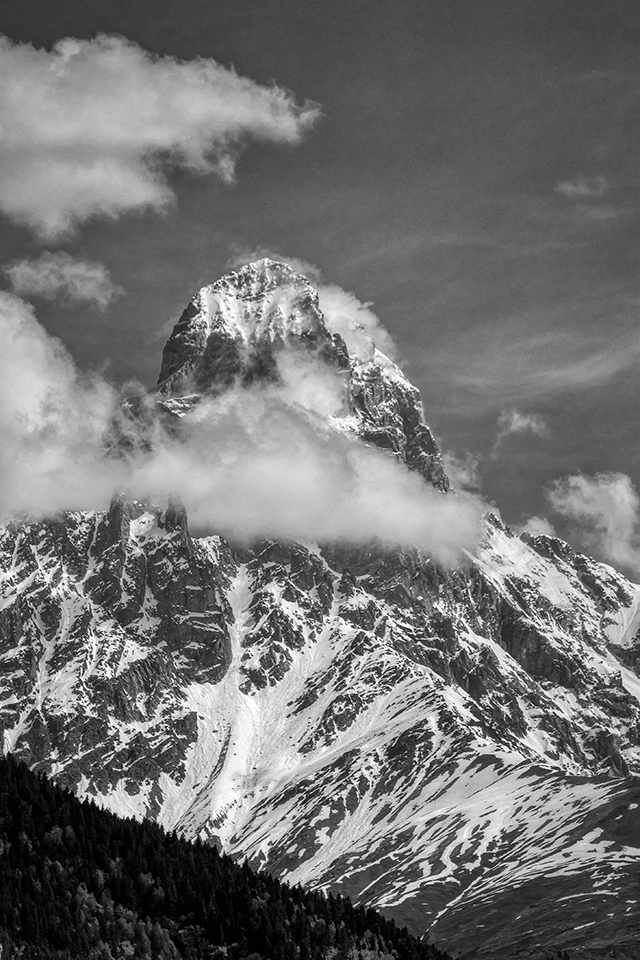 Today I had to go to Mestia twice, hunting and finding a plumber and general repair person to do some urgent faucet-cleaning and door-handle-changing before guests arrive tomorrow evening. I have little mechanical patience for such intricate work; but give me a blank piece of paper or memory card and I’ll fill them with words or images. I did score the help, drove him out and back, and on the way got even more images of Ushba. The first set shows the Mountain doing what I thought was something rare: UNclothing itself of cloud and standing there revealed once again in glory. I shot away in great humble thanks, and am still processing the many photos I shot from these last two days.

I am reminded that Ushba seldom fails to surprise; and that even the smallest part of it coming into view is something, which may even lead to more and more. Perhaps my having to leave the house, either on foot or by car, to see if I’ll see it, is much more satisfying than merely looking out the window for such knowledge. I have to chase my obsession, and for this reason I think it remains a rarer delight, when it cooperates. In the meantime, I shall continue to be one of its portraitists as often as time allows.