Beth Harmon in The Queen’s Gambit is played by Anya Taylor-Joy. Nona Gaprindashvili says it was a lie to suggest she had never played men. SPLASH NEWS /ALAMY

My entire family are movie buffs. We like watching movies in cinemas or on TV via Netflix or YouTube. My son, a moviemaker himself, often discusses new or old movies and the values they carry and make for our society, especially those based on real stories and historical events; otherwise, he says, what is the point of them?

As a multi-national family, we easily get excited when the small country of Georgia gets a rare international mention. Still, I usually find a lack of knowledge or poor research behind those references when it does get shown or talked about. We try to ignore it, because bad PR is better than no PR. Once, I was re-watching a James Bond movie and had to pause it, because the beautiful actress Femke Janssen and Bond referred to my native language Georgian as Russian. I wondered how I could have missed this slip when the movie came out long before, or how such a powerful blockbuster team could have missed such a simple mistake. This was a crucial point for me, and I decided to take on a quest to spotlight such mistakes everywhere I saw them. Another example- several documentaries on various channels have spoken about the Golden Fleece legend incorrectly, claiming it as Greek, and our food as “unidentified Caucasian flavors”.

So, should we interfere with someone’s intellectual property? Do we have any say about a fictional movie or even YouTube content? When do we say “enough is enough”? It seems that Nona Gaprindashvili, the legendary female world chess champion, has got to that point. As someone who defeated men and became the first woman to be named a Grandmaster, Nona has taken on Netflix in an extraordinary battle. The lawsuit, filed last week in Los Angeles and seeking $5 million, demands they fix Nona’s falsified image as someone who, prior to 1968, had never faced male competitors in chess; further, that she is mentioned as “Russian”.

“After all, it’s a TV series, and it will be aired and watched for many years in future, meaning more damage will come,” she and her lawyers argue.

When I interviewed Nona herself in January this year via Zoom, together with my son, a graduate of the Bristol Media University, the movie was already accelerating interest towards her persona, and chess in general. She was not very pleased with the outcome of the Netflix TV series, to say the least. Despite not being a big fan of TV or movies in general, this particular one was keeping her very busy with phone calls and messages.

“My family asked me to watch it [The Queen’s Gambit], but I was not very enthusiastic,” Nona told me in the interview, noting that she was told about the mistakes in the finale of the series by her family members. “I will be polite and say ‘mistakes’. The main character is fictional, which is fine, in which case you can make up stories, but when you use real characters, then I don’t think it’s forgivable to use unrealistic facts, especially when talking about the main Grandmaster title.” 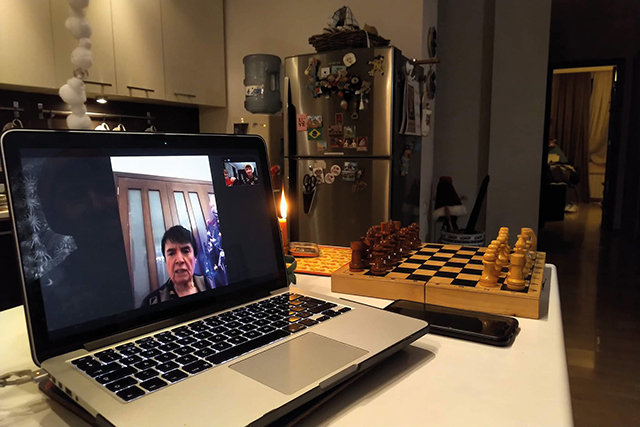 Nona recalls that even her childhood started by her competing with boys. “I was a happy child, and used to play with the boys in many kinds of sports- volleyball, tennis, table tennis, even football,” she recalls. The pure chance of replacing her brother at a chess tournament was a life-changing turn. She fast became a winning machine and, at the age of 21, was crowned World Women’s Chess Champion after beating Russia’s Elisaveta Bykova in 1962.

“Ms Nona Gaprindashvili was very insulted, of course,” Nona’s lawyer, Maya Mtsariashvili, told me in an interview last week. “The TV series had a huge impact on people who watched the series, the last episode in particular. Many calls were made to her, asking why she was mentioned the way she was and treated that way.”

“The whole essence of the lawsuit is exactly that Nona Gapridnashvili is a chess player and sportswoman, and she was the first Grandmaster woman amongst men,” the BLB lawyer told me. “She was the breaking point in woman’s chess-playing, and took part in the men’s tournaments successfully. This was the height of her career and achievements. This is not a case about a regular woman chess player: she was the first female Grandmaster, and her whole career has been highlighted by that fact. She believes that this episode of the TV series has had a serious negative impact on her career achievements.”

Nona told me how she took part in the men’s tournaments, competing with famous males, highly ranked Grandmasters. She told me how she was mentioned and refered to as Russian during the Soviet era, but always corrected them. As such, it was a surprise to see such a highly acclaimed and researched movie made with trivial errors, especially with Gary Kasparov as the consultant, whom she said she doubts would allow such mistakes.

Nona and I talked about how the main character of the TV show, Beth Harmon, sees the chess moves on the ceiling or in her mind. Nona smiled at that, and said it is not quite realistic, though you do “have the game in your head.” She recalled the Ukrainian player Ivanchuk fondly, remembering that when walking around, he would stare into space, like The Queen’s Gambit character, seeing the games on the wall, possibly working out tactics in his mind.

I knew that Nona would not let go of these false details about her life in the Netflix show. At the time of our interview, no lawsuit was mentioned, but I was not surprised when the news broke: There is no doubt that Harmon’s character plainly draws on Nona’s achievements. The lawsuit states that the main character of the series is in many respects an Americanized and fictionalized version of the real-life female Georgian prodigy, who was the first to break gender barriers in international chess in the 1960s.

Nona’s lawyers prepared a lawsuit which, according to them, is simple in its factual and legal predicates. They claim Netflix lied about Gaprindashvili in a profound and obvious manner, that Netflix thinks this is just a “harmless story” and doesn’t contain defamatory statements or damage Nona’s name, reputation, and honor.

“We believe this completely disregards her career and achievements, and we do not understand why [it was done], with her name deliberately lowered to elevate the fictional character,” Mtsariashvili says. The lawsuit also states that as Gaprindashvili’s name is mentioned, an actor is shown sitting in the audience, watching the game, obviously meant to be Gaprindashvili, who I have to agree is striking similar to how I remember Nona Gaprindashvili.

Georgian social networks have been awash with news of the lawsuit. Many argue that Nona has a very slim chance of winning against Netflix, while others stand by her fight. I am on the fence about it, because I’ve seen Quentin Tarantino change history many times onscreen, going on to face criticism and lawsuits to no avail. But Nona and her team are doing nothing unusual in their filing a claim. They are protecting her image.

“We will be serving the papers on Netflix and they will have 21 days to file a responding plea,” Nona’s lawyer told me. “Its first filing will be an answer in which Netflix will have to state whether it admits or contests the allegations in the complaint.”

Nona Gaprindashvili is a true female hero of the times. Born and raised in a rural area of Georgia alongside four older brothers, she was already a champion of female empowerment then. Nona says one of the best features of a good chess player is to have steady nerves; talent is not enough, as you also need patience, training and physical power.

She has all the above traits, and they will be needed while she waits for the outcome with Netflix, a true Queen in her strong yet humble personality, as well as in her colossal achievements.

After my mother, a chess lover who occasionally played with her grandkids, saw me recording that Zoom interview with Nona, she recalled how in Soviet times, “Nona Gaprindashvili” and “Nana Aleksandria” (another great chess player of ours) name-sake perfumes were released. She apparently had them both; Nona was featured as the Queen, and Nana was a pawn. I double-checked this with Nona. She told me she had no idea why they did that.

“A pawn is just as good and as important as the Queen,” she said with a smile.