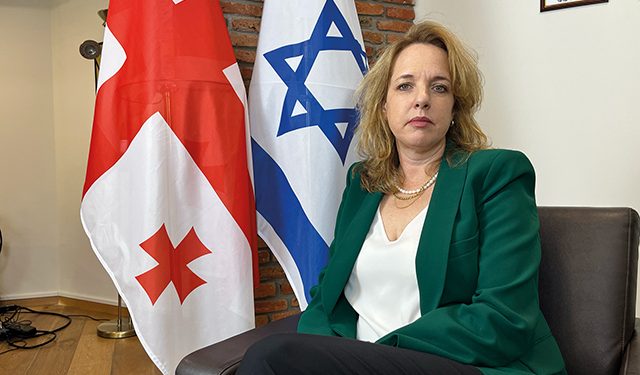 With H.E. Ran Gidor ending a chapter of successful four-year ambassadorial work in Georgia on behalf of his homeland Israel, now an exciting new chapter is about to begin. Newly appointed Ambassador Hadas Meitzad is taking on the responsibility of continuing this centuries-old relationship between two historically linked countries – Israel and Georgia. Her experience and knowledge, especially in the field of political-military diplomacy, is sure to have positive effects. GEORGIA TODAY is the first media outlet she chose to give an interview to.

“Since the age of 18, I’ve been serving my country through different platforms,” the Ambassador tells us.

“I served in the air force for eight years and then I joined the Ministry of Foreign Affairs. After going through the basic training, cadet course, I was sent for my first posting in Japan, Tokyo, which was an incredible experience, because I mostly dealt with and learned a lot about the use of soft power in diplomacy. My second posting was in the UN, where I had a very wide portfolio, and where I dealt with matters such as the Sustainable Development Goals (SDGs). I was honored to take part in the negotiations about the SDGs on behalf of the state of Israel. It was fascinating process to see all the members of the UN negotiating about the future of humanity, and what should be done to ensure a better future for us all. Later on, I dealt with core national affairs, the Middle East. I dealt a lot with the UN Security Council, affairs related to the Israeli-Palestinian conflict, to the Iranian nuclear file, the wars in Syria, Libya, Yemen. In between, I also held some positions in ministries, and my last one was as Chief of Staff of the Political Director.

I wish Georgia the same thing I wish my own country: To remember the importance of tolerance and pluralism, in both society and the country’s political system

“Generally speaking, I would say that my field of expertise has been in political-military diplomacy. I have dealt with this region in the past, for quite some time, and I’m very happy now to be here in Georgia; to deepen my knowledge about the Caucasian area and to learn more about Georgia and the region.” 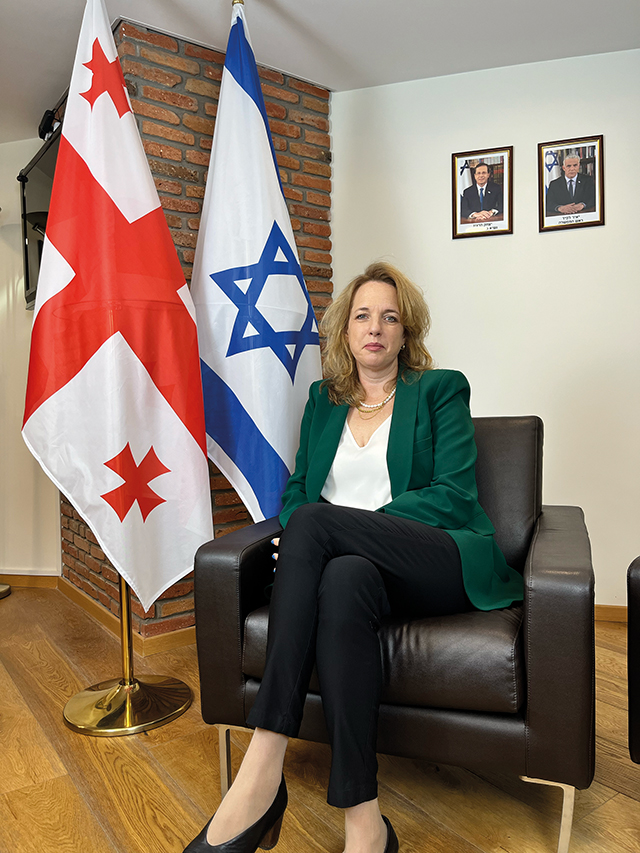 This year Georgia celebrates 30 years of diplomatic relations with Israel. Could you sum up the past three decades?
I’ll not be able to sum up 30 years of diplomatic relations, but I can briefly go over the main pillars of those relations. The first is the people-to-people relations. The embassy has been working a lot to ensure that the cultural exchange between two countries is both intense and comprehensive, because at the end of the day, exposure of the Georgian people to Israeli art, literature, cinema, and for the Israelis to Georgian culture, is what builds a very strong and solid network and platform.

We canceled the visa regime few years ago, and now Georgia is enjoying around 200,000 Israelis on a yearly basis, who come here to enjoy the landscape, food and hospitality. For Israelis to come and experience Georgia affects very much the strength of the relationships formed, and I’m happy to say that it also contributes to the economy here.

We work a lot in the economic field, and here I’m talking about where Israel can assist and contribute to the Georgian economic wealth. One of the main tools we’ve used and still use very much is MASHAV. MASHAV is Israeli’s center for international development, and what we’re doing through them is showing our expertise, our experience in relevant fields, and here in Georgia that is a lot about agriculture, as well as education, about accessibility in entrepreneurship or education for persons with disabilities. A lot of focus has been put on building capacities for locals to become entrepreneurs or innovators in both rural areas and in the heart of Tbilisi. We also have the Israel Chamber of Commerce, which is very active in trying to enhance and contribute to the mutual trade and commerce between the two countries.

We’re looking at very impressive growth. A lot of Israeli companies will find Georgia very interesting. We will look for ways to assist in the matchmaking

The governmental relations are extremely good, unaffected by whomever is in the government in Israel or in Georgia. Throughout the last 30 years, there has been a constant dialogue between Israel and Georgia. We just had elections in Israel this week, and I’m certain that after the new government is sworn in, and because we had quite a pause because of the pandemic, we will soon see even more high level visitors coming over from Israel.

The friendship between Israel and Georgia dates back to way before the 1990s, but what’s more interesting for me now is what we should expect in the coming future economically, culturally, militarily, and beyond.

Tell us about your goals here as Ambassador.
As Ambassador of Israel to Georgia, of course my main task here is to deepen and to extend our relations. In culture, expect to see two Israeli plays that are to be produced here in local theaters in the coming weeks. We will continue to support and to encourage cultural exchange between the two countries, recognizing the importance of art in creating true understanding between people.

The second thing is economy and trade. Here, we’re looking at the very impressive growth numbers and different projects that are being announced, and I believe a lot of Israeli companies will find Georgia very interesting. We will look for ways to assist in the matchmaking and to see that more and more commercial operations are taking place. The embassy focus is going to be on entrepreneurship and innovation. We believe that this is something that Israel has added value from best.

I mentioned bilateral governmental relations. Prime Minister Garibashvili was in Israel a few months ago, on a very successful visit. He met then-Prime Minister Naftali Bennet and then-Foreign Minister Yair Lapid, who then became prime minister, and it gave them an opportunity to discuss in a very open and frank manner the latest geostrategic development here and in the Middle East. And as I said, I’m quite certain that after the government in Israel is sworn in, we will see a renewal of such high-level visits and exchanges.

Some political parties have become more anti-Western than ever before; they blame the US and EU for trying to drag Georgia into the Russo-Ukrainian war. What’s your opinion?
I will start by saying that I believe that the course for Georgia has been set, and that course is EU membership. I’ve heard it from the Prime Minister, the various ministers, as well as the heads of the opposition parties here. And it is also coming from the Europeans, from the German chancellor, who sent a comment about Europe being “spread from Lisbon to Tbilisi”.

For Israel, the EU is a very important partner. In fact, the EU market is our first trade market. Israel is cooperating with the EU on each and every one of its programs in the fields of science, technology, education. There is also lot of mutual exchange that both sides benefit from a lot. The US is our strongest ally, and I think it’s always very important to remember who your allies are, especially in more complicated times. Our alliance with the US is not just a security or defense kind of alliance, but is also based on the fact that we share lot of values. We also work together in other countries, for example here in Georgia. MASHAV, the Israeli aid agency, has ongoing cooperation that has been happening now for many years with USAID. In all of my meetings so far with the American Ambassador Kelly C. Degnan, as well as with her team, I was very much impressed by the high level of professionalism, as well as devotion and commitment to the Georgian people.

Polarization is one of the main issues facing our country today, seen in politics, society, and media. What would you advise as an ambassador from a country which also struggles with this issue?
Democracy isn’t always easy, but there is no alternative. Coming from a country that just went through its fifth election in a very short period of time, I don’t think that I’m in a position to give any advice. I will say that I’m wishing Georgia the same thing that I wish my own country: To remember the importance of tolerance and pluralism, in both society and the country’s political system.