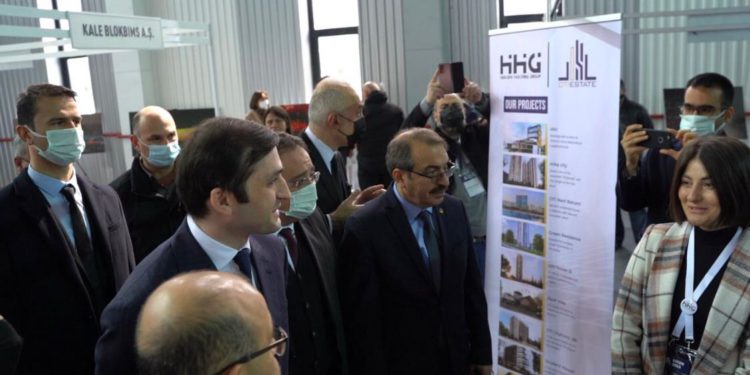 On March 14-16, Batumi hosted the 11th International Exhibition of Construction Materials Technologies and Real Estate, with the participation of Hebashi Holding Group companies OTI Estate and GAABU (the Georgian Arabic African Business Union). The exhibition allowed participants to present their own companies, attract more investors and introduce their own projects.

On March 14, the opening ceremony was attended by the Chairman of the Government of the Autonomous Republic of Adjara, Tornike Rizhvadze. The companies included in the HHG introduced their projects and talked about future plans in Adjara, as well as throughout Georgia and around the world.

“It is important for us to maintain economic dynamics. The involvement of the state and companies as a private sector ensures that the development of the economy in the region and the country does not face a significant challenge,” Rizhvadze said.

HHG founder Hani Hebashi said he hopes the event will help all participating companies achieve greater success in the future.

The beginning of 2022 witnessed the advancement of Hebashi Holding Group to a level that puts it at the forefront of competition with the largest international companies in Georgia. The Hebashi Holding Corporation for Real Estate Investment was launched with the efficient help of a promising founder who possesses great passion and ambition, armed with a wealth of knowledge of scientific and practical studies and policies in the real estate sector from all over the world.

The journey began with 23 real estate development projects of continued strong relationships and partnerships, and with a network of clients that support its presence and enhance its position in serving this sector by highlighting and enhancing the value of investment and extracting added value ​​and focusing on this in all its real estate business.

Honesty and sincerity, in addition to passion, science, and young, bright and open minds had a great impact in creating the imprint of the ‘Hebashi Holding Group for Real Estate Investment.’

Hebashi Holding Group was able to maintain the strength and durability of its financial position during past periods through diversification of its investments locally, regionally and internationally, which contributed to the continuous growth of its financial performance and operational activity. Currently, the company’s projects and real estate investments include investing in promising areas, developing office and commercial towers and residential units, in addition to investing in the hotel and entertainment sectors and others to contain many areas of investment and vast real estate ownership, as its issued and fully paid capital amounted to $400 million by the beginning of 2022.

By implementing new investments estimated at $63 million in a qualitative project, the Hebashi Holding Group launched its new project, “Batumi Pearl,” which is characterized by its direct view of the Black Sea and its being strategically located within the vital area of ​​the Black Sea shore.

Mr. Hani Hebashi, ​​CEO of Hebashi Holding Group, expressed his pride in launching the “Batumi Pearl” project, which is the first project of its kind that reflects tourism investment in a unique and distinct way, in addition to its direct view and terraces on the sea.

“We are working continuously and in clear steps to achieve the company’s vision through planning and actual study of projects that are unique in excellence and innovation in serving the largest segment of society, where the passion leads us to cover and meet this need by introducing new real estate products to become landmarks and brands that we are proud of,” Hebashi notes, adding that, “We, at Hebashi Holding for Real Estate Investment, adapt, adopt and build upon changes. We have adopted Georgia’s 2023 vision to be the leading institution in the field of investment management and real estate consultancy in the Caucasus region and the world.”

He says he considers passion to be one of the most important ingredients for success.

“A person cannot achieve success in its dimensions and vocabulary unless passion takes a means to reach that. This moral means is something noticeable in the development of the Georgian economy, which hardly stopped growing for a single moment, leading to the openness of investment in the country,” he states.

To become a fertile land for growth and a high opportunity for investment, and in line with the renaissance of life in its various fields, the idea of ​​establishing of the Hebashi Holding Group for Real Estate Investment appeared.

“In order to ensure the efficiency and feasibility of our consultations, we have expanded under the umbrella of Hebashi Holding group by establishing various companies, which came to complement and enhance the path of our successes that began with OTI Real Estate Investment Company,” Hebashi says. “This company came to compete with real estate companies in Georgia, with its expertise and solutions, with which we aspire, with God’s help, to support and serve the real estate sector in Georgia.”

Hebashi Group attaches importance to the process of expanding the base of its development projects at the local and regional levels. Therefore, entering into strategic partnerships with major companies in Georgia and abroad occupies the same importance.

Mr.Hebashi notes that the launching of “Batumi Pearl” is scheduled for early 2022. The project will be the first of its kind due to the great care it has taken in developing a concept and design that combines high-end restaurants and cafes with family entertainment and investment alike.

Mr. Ayman, the company’s sales director, expressed his pride in this achievement, especially in the midst of high competition and in light of the high standards that require acceptance of projects, within this competition in which major international and regional companies, active and operating in Georgia, participate. He stated that the “Batumi Pearl” project consists of 31 floors and includes a 5-star hotel, a group of selected international restaurants and a number of luxury brand stores, which in turn will benefit from the importance of the location, and the splendor of design and international standards of implementation, as the project represents a standard of modernity, elegance and beauty.