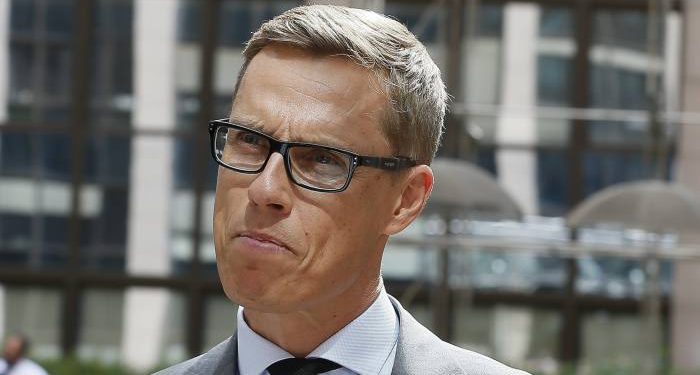 Putin’s historic, Great Russia has three elements: number one is one language – Russian, number two is one religion – Orthodox Christianity, and then number three is one leader – Putin himself

“Putin wants to avoid the Europeanization of Ukraine,” Former Finnish Prime Minister Alexander Stubb told RFE / RL. He began his political career the year Vladimir Putin became Russia’s prime minister. Stubb has been the Minister of Foreign Affairs of Finland, the Minister of Finance, the Minister of European Affairs, and a Member of the European Parliament at various times. His knowledge of Putin, Russia and the region is much sought-after.

What are we witnessing right now?

Well, I think we’re seeing a classic case of Russian aggression, post-cold war. We’ve seen it basically on three occasions. The first one was in Georgia in August 2008. The second one was the Crimean peninsula, and of course, the Donbas region in 2014. And now we’re seeing the third phase of it as a full scale invasion of Ukraine. The playbook is pretty similar. So first, there’s talk about historical Russia and its borders. After that there’s strong rhetoric and disinformation, then there’s a movement of troops, some exercises. And then there’s recognition of the breakaway regions, with Georgia it was South Ossetia and Abkhazia, and then the “peacekeepers” move in. And now, this is kind of a new phase in the playbook, a full scale attack, which a lot of people didn’t see coming, but it happened.

Putin’s infamous speech a couple of days ago- what is he trying to accomplish? Is he making that speech into the new modern reality? Or is it “just” about regime change?

The speech was almost dystopian in many ways. And it wasn’t what I would call vintage Putin, it was actually quite irrational, quite rambling. I’ve seen him in action close up for quite a few years. And normally, he is much more structured than he was in that particular speech. I think it’s very difficult to say what the end game is going to be this time around. Certainly, you could contemplate a little bit the motives that he has with the current attack. I think one of them which people aren’t talking about enough is he wants to avoid the Europeanization of Ukraine. So it’s a sort of 1989 moment, if you will. We know that he wants to reinstate this nostalgic, historic Russia, from the 1800s or something, something similar to the Soviet Union. This historic, Great Russia for him has three elements: number one is one language – Russian, number two is one religion – Orthodox Christianity, and then number three is one leader – Putin himself. And in that package, obviously, we can very easily see Belarus, which seems to be almost the forgotten entity in the debate. But, we shouldn’t let the baby go with the bathwater. And that’s what we’re doing with Belarus, not focusing on that. And the other element of it is Ukraine.

The thing I find worrying from his perspective: the reaction of the West is actually quite strong. And Putin’s getting exactly the reaction that he didn’t want to, I mean, Ukrainians are turning against Russia, the Fins and Swedes are becoming more pro-NATO. So I think, you know, potentially, this could be the beginning of the end of Putin.

In an earlier interview, you called Putin “one of the most intelligent, strategic leaders” that you’ve ever met. Such public praise for him is quite uncommon among Western opinion makers. If anything, he’s more often called “a gambler, paranoid, a madman, a tactician.” Has the West perhaps underestimated Putin?

I think you should call a spade a spade. And if you’re in power in Russia for 20 years, as the President and Prime Minister of Russia, I mean, you have to be a strategic thinker. There’s no question about it. And he is a strategic and a rational thinker. We don’t know what state [of mind] he is in at the moment. So I think the West has gotten him at times wrong. Never underestimate Putin.

What should we expect from the West?

We’re going to see a big package of sanctions coming up. We’ll see a second wave of sanctions, and then we’re probably going to see a third wave of sanctions. And, you know, if we’re looking for a silver lining here, it is that I see a very united West at the moment, which I welcome. But, unfortunately, this is going to lead to the isolation of Russia under Putin. Now that Russia has invaded and penetrated all the way to Kyiv, including the airport, I think the sanctions are going to be pretty much as big as they can be at this stage.

Everything needs to be on the table. Including SWIFT, which is I think the “nuclear option”

Do you share the opinion that something should be kept off the table, for example, SWIFT?

I think everything needs to be on the table, including SWIFT, which is I think the nuclear option, which basically shuts down the financial services altogether for Russia. The term that I have used is the one that Mario Draghi used during the financial crisis when he was president of the ECB. I think we are in sanctions terms at the “whatever it takes” moment, and I believe that we are going to see whatever it takes: everything is on the table.

A few months back, all the talk was about Belarus and the liberation movement and getting rid of Lukashenko. And now, even though Lukashenko and Putin have played out one of their new strategic games, we no longer speak about Belarus much. And of course, there’s responsibility with Lukashenko here as well. I mean, he can’t wash his hands of it in any way. Quite the contrary, he’s become part of the game in a big way. And not only is he using his troops in Ukraine, he’s using Belarus as a transit route. So it’s absolutely clear that he needs to be held accountable as well.

Russia knows what it stands against if it starts moving towards either Finland or Sweden, so I’m not worried

Today, we are dealing with Ukraine. The question is, whose turn will it be tomorrow? Do you share the concerns that non-NATO member Finland might be the next target for Russia?

No, we’re not worried in Finland. We’re not worried about Finnish security. I think Finland, despite having 1340 kilometers of border with Russia, has been feeling fairly secure. We are members of the European Union, we are part of the Euro. On top of that, we have deep cooperation and partnership with NATO. Basically, we’re more NATO compatible than most NATO member states themselves, including 64 fa teams, a purchase of an additional 64 F 35. Plus military equipment fully compatible with NATO. So, you know, Russia knows what it stands against, if it starts moving towards either Finland or Sweden, so I’m not worried about Finnish security. I am, however, very worried about Ukrainian security at the moment.