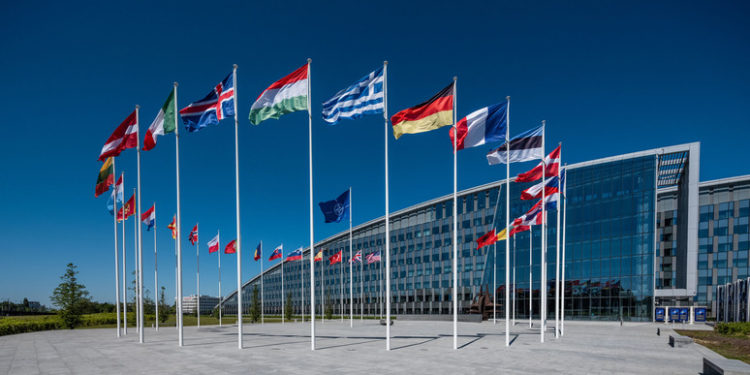 After the meeting held in Bucharest, the NATO foreign ministers issued a joint statement, in which they also talk about supporting Georgia.

“We are gathered in Bucharest, close to the shores of the Black Sea, at a time when Russia’s ongoing invasion of Ukraine threatens Euro-Atlantic peace, security, and prosperity. Russia bears full responsibility for this war, a blatant violation of international law and the principles of the UN Charter. Russia’s aggression, including its persistent and unconscionable attacks on Ukrainian civilian and energy infrastructure is depriving millions of Ukrainians of basic human services. It has affected global food supplies, and endangered the world’s most vulnerable countries and peoples. Russia’s unacceptable actions, including hybrid activities, energy blackmail, and reckless nuclear rhetoric, undermine the rules-based international order. We stand in solidarity with Poland following the incident of 15 November that led to the tragic loss of life as a result of Russia’s missile attacks against Ukraine. We condemn Russia’s cruelty against Ukraine’s civilian populations and violations and abuses of human rights, such as forcible deportations, torture, and barbaric treatment of women, children, and persons in vulnerable situations. All those responsible for war crimes, including conflict-related sexual violence, must be held accountable. We also condemn all those, including Belarus, who are actively facilitating Russia’s war of aggression against Ukraine.

“We welcome Foreign Minister Kuleba today, stand in full solidarity with the government and people of Ukraine in their heroic defense of their nation and land, and pay tribute to all those lives lost. We remain steadfast in our commitment to Ukraine’s independence, sovereignty, and territorial integrity. We will never recognize Russia’s illegal annexations, which blatantly violate the UN Charter. We will continue and further step up political and practical support to Ukraine as it continues to defend its sovereignty and territorial integrity and our shared values against Russian aggression, and will maintain our support for as long as necessary. In this context, NATO will continue to coordinate closely with relevant stakeholders, including international organizations, in particular the EU, as well as like-minded countries. Building on the support provided so far, we will help Ukraine now to strengthen its resilience, protect its people, and counter Russia’s disinformation campaigns and lies. Allies will assist Ukraine as it repairs its energy infrastructure and protects its people from missile attacks. We also remain resolute in supporting Ukraine’s long-term efforts on its path of post-war reconstruction and reforms, so that Ukraine can secure its free and democratic future, modernize its defense sector, strengthen long-term interoperability and deter future aggression. We will continue to strengthen our partnership with Ukraine as it advances its Euro-Atlantic aspirations.

“Finland and Sweden are participating today as states invited to join the Alliance. Their accession will make them safer, NATO stronger, and the Euro-Atlantic area more secure. Their security is of direct importance to the Alliance, including during the accession process.

“Recalling that the Western Balkans and the Black Sea regions are of strategic importance for the Alliance, we welcome our meeting with the Foreign Ministers of NATO partners Bosnia and Herzegovina, Georgia, and the Republic of Moldova, as NATO strengthens its tailored support to building their integrity and resilience, developing capabilities, and upholding their political independence. We firmly stand behind our commitment to the Alliance’s Open Door policy. We reaffirm the decisions we took at the 2008 Bucharest Summit and all subsequent decisions with respect to Georgia and Ukraine.

“NATO is a defensive Alliance. NATO will continue to protect our populations and defend every inch of Allied territory at all times. We will do so in line with our 360-degree approach and against all threats and challenges. We condemn terrorism in all its forms and manifestations and stand in solidarity with Türkiye in grieving the loss of life after the recent horrific terrorist attacks. We face threats and challenges from authoritarian actors and strategic competitors from all strategic directions. In light of the gravest threat to Euro-Atlantic security in decades and in line with the Strategic Concept, we are implementing a new baseline for our deterrence and defense posture by significantly strengthening it and further developing the full range of robust, combat-ready forces and capabilities. All these steps will substantially strengthen NATO’s deterrence and forward defenses. We remain committed to prepare for, deter, and defend against hostile attacks on Allies’ critical infrastructure. Any attack against Allies will be met with a united and determined response. We stand together in unity and solidarity and reaffirm the enduring transatlantic bond between our nations. We will continue to strive for peace, security and stability in the whole of the Euro-Atlantic area.”