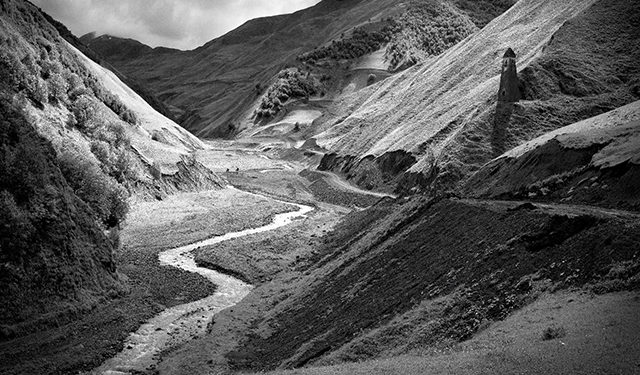 Ansel Adams (1902-1984, American) is widely regarded as the most important landscape photographer of the 20th century. He shot both in black and white and in color, but regarded his monochrome work as the more important. His sheet film negatives were between 4 x 5 and 10 x 14 inches, suitable for huge enlargements onto photographic paper. Original Ansel Adams prints sell for hundreds of thousands of dollars nowadays at auction.

His most famous image is called Moonrise, Hernandez, New Mexico. He forgot to date it, but astronomical information within the image allowed it eventually to be dated exactly to November 1, 1941. He describes it as a scene which he came across while driving at night, with a very short time to prepare and take the shot due to the changing weather conditions. No time for a light meter… set up box camera on tripod… Although the moon is small in the scene, he exposed the whole thing (based on his extensive experience) so that the moon would have its tones intact, instead of being an overexposed pure white disk. The highest price to date paid for a single print of Moonrise has been $609,600, at a Sotheby’s auction in New York. It is a stunning image indeed (you might call it a “drive-by shooting”), but also one of many hundreds of magnificent pieces in his archive.

I have a long way to go, but began my own photographic career at age 11, using the family’s Kodak Instamatic 126 camera to shoot some sunsets on Vancouver Island, BC on our first cross-country Canadian camping adventure from Ontario. My first large print, 16 x 20 inches, is from one of those color negatives. Nothing spectacular perhaps, but I was hooked. It wasn’t until 2008, aged 41 and with some tens of thousands of 35 mm negative and slide frames behind me, that I switched to digital.

While landscape work is one of my main subjects, it is best done as a combination of the right scene in the right lighting; the two are rarely found together at first glimpse. Rarely, but sometimes. Usually you find the location, and return to it once or many times as the seasons and light change. Occasionally, though, you just stumble across the right thing. If you are ready, both to recognize what you have and then to capture it quickly, you can be hugely rewarded by those few seconds of everything coming together for you.

Such was the occasion for me on June 23, 2020, the day after summer solstice. Stuck in Georgia by Viral conditions preventing travel abroad, I resolved to make the most of the occasion; this country has impossibly varied locations, microclimates and possibilities for its small size. One such excursion was with some guy friends to Khevsureti, north-east Georgia, including around Shatili, just south of the border of Chechnya in Russia.

I wasn’t driving, which gave me more freedom to see. I tried not to make myself too annoying by requesting photo stops too often, but sometimes the wild mountain landscape, dotted with Khevsur slate watchtowers and threaded with white-water streams, was just too much. Like something straight out of Middle-Earth, with nothing modern in it to break the spell.

There came one such moment on our trip up. “Stop please!” I called out; but it was the scene which was calling to me, loud and clear. All diagonals, partly cloudy sky gently darkening or lightening areas. Slash of river next to road. Valley of slate and grasses. Pure magic.

Now, I only had my digital camera to hand-hold, switch on before we even stopped, frame and take the shot. Focus and exposure were automatic; and with the ability of the RAW file format to take in a great range of highlights and shadows, and nothing over-or underexposed drastically in the frame, it was a quick, easy, not too contrasty thing to shoot.

What changed it from rather good to possibly my greatest landscape shot ever, though, was the sudden appearance of two horsemen galloping into the scene! They, small in proportion, add the human element of scale. I only took a single image, and it seems to work much better in black and white than in the green-dominated color version; less to distract from the tones and composition of the piece.

Now I am considering how best to print this thing, in what numbers and sizes. Probably a large format limited edition, hand signed and numbered. What serendipity, to come across such perfection and be ready and able to record it.