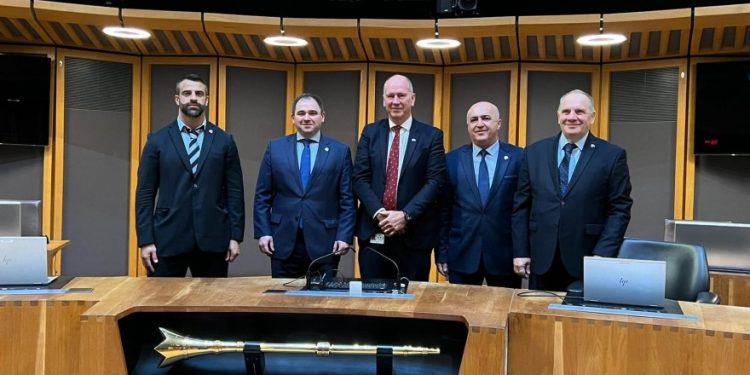 Within the visit to the UK, MPs held meetings with the Deputy Presiding Officer of the Senate of Wales (Senedd Cymru), David Rees and the Chair of the Education Committee, Jayne Bryant.

The parties touched upon the extension of the relations between the Georgian and Welsh Parliaments concluded in 2015 in various directions, including education, youth, culture and healthcare. Georgian MPs met with the Minister of the Constitution of Wales, Mick Antoniw and discussed the processes and legal reform in Wales, the Russian aggression in Ukraine, and its impact on British politics and economy.

The meeting was as well held with the representatives of Wales in the British Parliament, members of the House of Commons, Jessica Morden and Kevin Brennan.

“We overviewed the strategic partnership aspects between Georgia and Great Britain and the bilateral parliamentary relations. We informed our colleagues about the security and economic reforms in Georgia. The Welsh MPs asked about the mediation of Georgia in the Azerbaijan-Armenia conflict,” Samkharadze noted.

As Delegation member Lominadze noted, the Georgian MPs met with the representatives of the twin cities – Newport and Kutaisi Association and discussed the cultural and sports projects, as well as the financing of the Georgian students.

The visit included a meeting of Chichinadze and the delegation members with the Georgian Diaspora, to hear about their needs and discuss the projects facilitating the representation of Georgian culture by the Diaspora members.