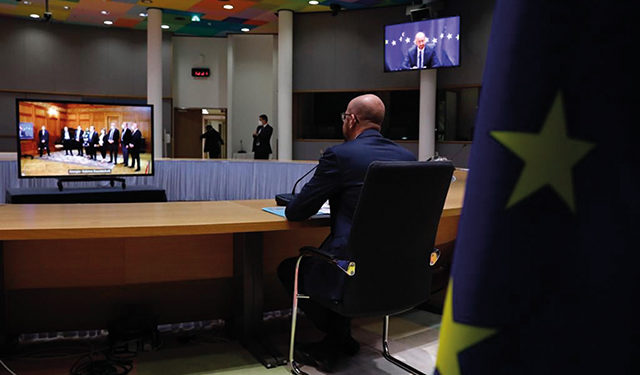 “Agreement in Georgia! Sakartvelos Gaumarjos!” – President of the European Council Charles Michel wrote on Facebook, following his witnessing of his agreement signed by the majority of Georgian politicians, both ruling and opposition.

“Congratulations to the political leaders for signing the agreement to exit the current crisis. You give priority to the interests of the people and let democracy prevail. Thank you President Salome Zurabishvili and all parties!” he added.

Charles Michel released a new proposal at the beginning of the week, suggesting electoral and justice reforms and offering a pardon for all violations and convictions stemming from the 19-21 June 2019 protests.

Based on the mediators’ document, the persons assessed as political prisoners should be released within a week after the signing of the agreement between the government and the opposition. In addition, based on Michel’s proposal, early elections should be called in 2022 if the Georgian Dream party gets less than 43% of votes in the local elections.

Opposition parties that have signed the EU-mediated agreement with the ruling Georgian Dream party will enter Parliament on April 27 to submit an amnesty bill, which President Salome Zurabishvili has agreed to sign.

Presently, only the United National Movement and European Georgia parties have refused to sign the EU Council’s updated compromise document.

Three MEPs, Marina Kaljurand, Sven Mikser, and Viola von Cramon-Taubadel, released a joint statement on the resolution of the political crisis in Georgia, calling on the remaining political parties and Members of Parliament to sign the agreement.

“We do believe that this proposal is politically balanced and places the needs and legitimate expectations of all Georgian citizens at the center of the debate. It offers a way out of the current political impasse and can help to reduce the political polarization that has poisoned Georgia’s political life for too long. The proposal gives fresh impetus to the consolidation of democracy and the rule of law, thus matching Georgia’s European aspirations,” the MEPs wrote.

“We solemnly call on the remaining opposition parties and individual Members of Parliament to show the same courage for the greater good of Georgia. For this political crisis to be totally and definitively behind us, we hope that the Parliament of Georgia becomes fully functioning in the nearest future, and ensures that the agreement is thoroughly implemented in word and spirit. The European Parliament remains ready to continue its close cooperation with the Parliament of Georgia by providing assistance, among others, via parliamentary electoral dialogues and mediation between the different political factions.”

“The implementation of the agreed moves now requires a new spirit in politics, a spirit of working for mutual success,” said German Ambassador to Georgia Hubert Knirsch, who was one of the facilitators in the ruling Georgian Dream party and the united opposition’s post-election talks.

British Ambassador to Georgia Mark Clayton also spoke publicly of the agreement signing, as did the US Embassy.

“The United Kingdom supports the agreement reached by many parties and individuals. We call on the parties that have not signed the agreement to show courage and sign it. This is a very important step forward for Georgia, for its future, for Georgia to continue to move forward, to continue on the path of integration into Euro-Atlantic structures,” Ambassador Clayton told reporters. 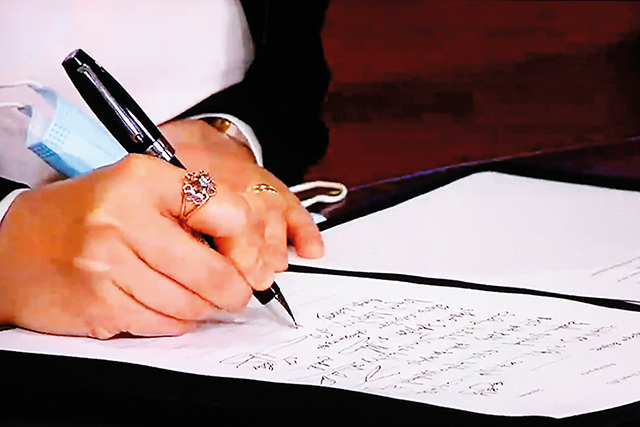 “The United States welcomes the agreement reached by the parties today, under the auspices of European Union President Michel’s mediation, to bring an end to Georgia’s political crisis,” the US Embassy posted April 19. “This agreement required difficult compromises by all sides. Above all, it required political courage and a commitment to the people of Georgia to continue the hard work of building democratic institutions and strengthening the rule of law.

“While the signing of this agreement is a significant step, ending months of negotiations, we recognize that its implementation is equally important. The United States is committed to assisting the Parliament to ensure this agreement achieves its aspirations.

“We invite individual Members of Parliament and remaining parties to sign the agreement so that all of Georgia’s elected representatives can begin working together in a fully functioning Parliament on the pressing issues facing Georgia.

“As always, the United States stands ready to support Georgia on its path toward full integration into the Euro-Atlantic family of nations.”

The Prime Minister of Georgia, Irakli Garibashvili, responded to the signing of the document proposed by Charles Michel and said that it was a “victory for Georgia.”

“[By signing], we have taken the most important step towards strengthening democracy. This is a victory for Georgia!” he posted on Facebook.

“Most importantly, thank you to the Georgian people for waiting so patiently for the political talks to end.
Now it is time to focus on the major challenges facing the country,” the PM said.