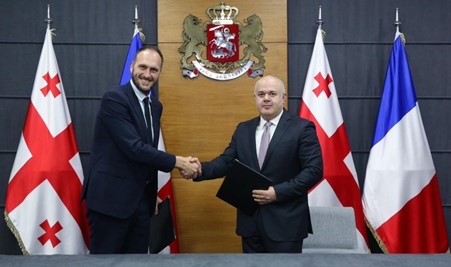 The Ministry of Internal Affairs of the Republic of Georgia has ordered three five-bladed H145 helicopters for public service missions. They will replace the current fleet of Russian made helicopters.

The light twin engine aircraft will be used for missions such as search and rescue, firefighting, medical evacuation and deployment of personnel to inaccessible places, for example in the mountains.

“We are very proud that the Republic of Georgia has put its faith in the five-bladed H145”, says Romain Lana, Head of Sales, Georgia at Airbus Helicopters.

“The landscape of Georgia is challenging, especially in the country’s mountain area. This is why the five-bladed H145 is a good choice for the country. The H145 performs well in high altitude and it is the only twin engine helicopter to have landed on top of the Aconcagua in Argentina, a mountain that is nearly 7,000 metres high. We are sure that the H145 will be an asset for Georgia’s renewed helicopter fleet.”

The new version of Airbus’ best-selling H145 light twin-engine helicopter adds a new, innovative five-bladed rotor to the multi-mission aircraft, increasing the useful load of the helicopter by 150kg. The simplicity of the new bearinglessmain rotor design also eases maintenance operations, further improving the benchmark serviceability and reliability of the H145, while improving ride comfort for both passengers and crew.

In total, there are more than 1,600 H145 family helicopters in service, logging a total of more than seven million flight hours. Powered by two Safran Arriel 2E engines, the H145 is equipped with full authority digital engine control (FADEC) and the Helionix digital avionics suite. It includes a high performance 4-axis autopilot, increasing safety and reducing pilot workload. Its particularly low acoustic footprint makes the H145 the quietest helicopter in its class, while its CO2 emissions are the lowest amongst its competitors.