Gakharia’s Team on US State Dep Report: We Call on Authorities to Start Real Reforms Immediately 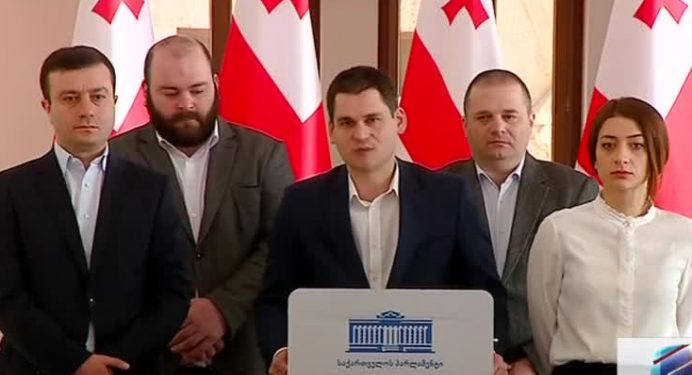 “We urge the authorities to start real reforms immediately, as similar assessments by the US State Department report could be disastrous for Georgia’s path to European integration,” Mikheil Daushvili, a member of the For Georgia party, said at a briefing on the US Department of State’s Report on Human Rights in 2021.

The report covers all the areas that have deteriorated in the country over the past year, Daushvili notes, adding that it also included the shooting at the car of their teammate Besarion Bendeliani.

“The government has exposed and continues to exhibit unprecedented persecution and pressure against our team. We will recall, for example, the case of Akaki Bartaia, the violence against Malkhaz Toria and his minor child, the still uninvestigated violence, the illegal detention of Gela Abuladze, a member of the Tsalenjikha City Council, the illegal dismissal of hundreds of people, etc. Confirmation of all this is that the case of Besarion Bendeliani was included in the report of the State Department, namely:

“On August 25, 2021, Tsageri mayoral candidate Besarion Bendeliani was shot in his car by the party “For Georgia” in order to take political revenge on him. This case is still uninvestigated,” Mikheil Daushvili said.

Daushvili notes the report pays special attention to the acute problems in the justice system, as well as the issue of corruption.

“The report highlights acute problems in the justice system, for example, the syndrome of impunity, which was sharply manifested by the events of July 5-6, 2021. In the same context, special attention is paid to the judiciary, which is one of the most important problems in the country, in particular, the High Council of Justice. In addition, it highlights the influential groups in the judiciary,” Daushvili said.

The party “For Georgia” calls on the government to start real reforms immediately, as such assessments by the US State Department report could be disastrous on Georgia’s path to European integration.

“Our team, we repeat, is ready to put aside all narrow partisan interests and help our country to conduct the European integration process correctly, efficiently and quickly,” Daushvili said.

“The Government took steps to investigate some officials for human rights abuses, but impunity remained a problem,” reads the 2021 Report on Human Rights Practices in Georgia, issued by the US Department of State.