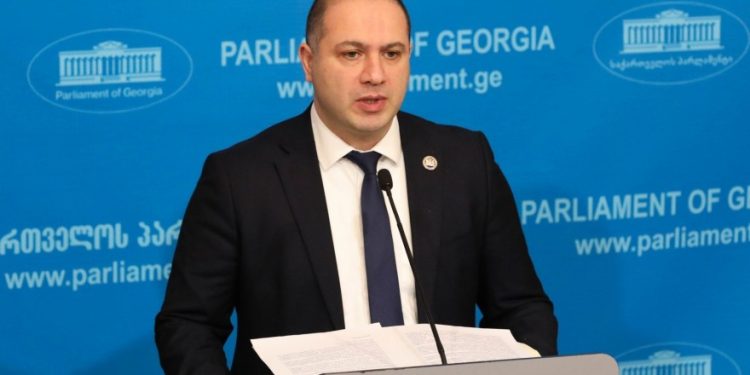 “OSCE/ODIHR and Venice Commission have submitted the draft opinions ahead of time concerning the legal package, the endorsement of the final edition of which they presumably intend to ensure at the sitting of December 15 of the current year. The Opinion unambiguously provides positive assessments related to certain legal changes. Particularly positive emphasis and accents are made on the reduction of the residence qualification required for the municipal candidates, provision of the impartiality of the Commission members and observers of the lower level, establishment of the additional criteria for vote re-tabulation, and extended terms for the submission of the claims,” the First Deputy Chair of the Faction Georgian Dream, the Head of the Working Group on Revision of the Election Code, Givi Mikanadze stated at the briefing when introducing the preliminary opinions of OSCE/ODIHR and Venice Commission on the Draft Election Code and the Draft Organic Law on Political Unions of Citizens.

As he noted, the Draft Opinion provides recommendations on certain issues in view of their further improvement, the detailed re-formulation of which is intended to be ensured upon the II reading.

“We intend to in detail consider each recommendation provided in the Opinion and submit respective changes to the II reading. As our society well remembers, the Chair of the Georgian Dream has publicly announced the detailed action plan providing that the changes to the election law shall be introduced within 2022. Despite that we have been expecting the OSCE/ODIHR and Venice Commission opinion earlier than submitted, the current reality allows us to adopt the changes with the III reading within December. As you may know, the applied practice envisages that the working edition of the Opinion is almost never been amended. Hence, being guided under the submitted document, the Legal Committee will consider the legal changes with the II reading within the current week and if approved, the package will be considered and adopted at the upcoming plenary session.”

On October 5, within the process of the fulfillment of the EU recommendations, the Parliament approved with the I reading the Draft developed and initiated by the Working Group and the Legal Committee, envisaging the respective changes to the Election Code and the Organic Law on Political Unions of Citizens, which has been submitted to OSCE/ODIHR and Venice Commission on October 10 for their expert opinion.