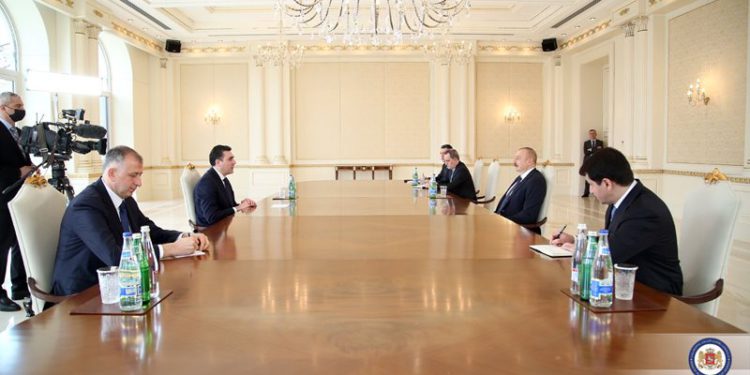 The Minister of Foreign Affairs of Georgia, Ilia Darchiashvili, met with the President of the Republic of Azerbaijan, Ilham Aliyev. At the meeting, the sides reaffirmed the traditionally close friendship and strategic partnership between the two countries.

The Minister of Foreign Affairs of Georgia highlighted President Aliyev’s personal contribution to deepening close partnership and friendship between the two countries.

The sides noted the importance of Georgia-Azerbaijan cooperation in various fields to ensure stability and development in the region, and in this regard, gave a positive assessment to the joint economic projects being carried out successfully.

Reviewing the security environment in the region and across the globe, the sides stressed the importance of peace and stability in the light of existing challenges. The Georgian Foreign Minister thanked Azerbaijan for supporting Georgia’s sovereignty and territorial integrity.

During the meeting with the President of the Republic of Azerbaijan, the sides welcomed the 30th anniversary of the establishment of diplomatic relations between Georgia and Azerbaijan. Darchiashvili conveyed to President Aliev the Georgian Prime Minister’s best regards and invitation to Georgia.

Darchiashvili started his official visit to Azerbaijan by laying a wreath at the Alley of Martyrs memorial and paying tribute to the memory of the national leader Heydar Aliyev.