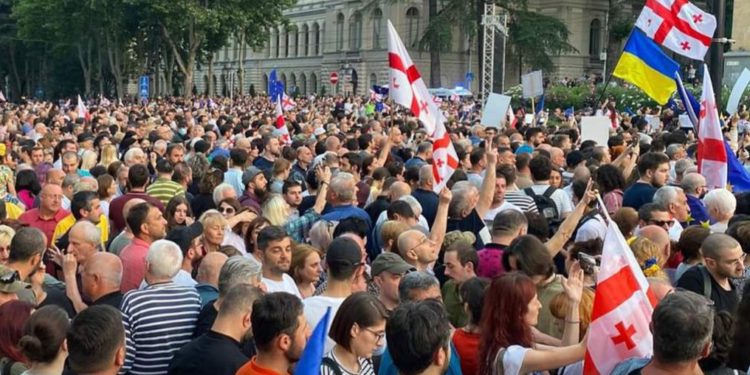 Members of the European Parliament addressed participants of the rally ‘Home To Europe,’ gathered on Rustaveli Avenue on June 20, urging them not to feel dissapointed due to the recent recommendation by the European Commission regarding not giving Georgia the Candidate Status at this stage, until the country meets certain conditions.

“The Georgian nation is pro-European and it must have a pro-European government to become a member of the European Union,” MEP Andrius Kubilius said in his video address to the rally.

He claimed that the European Commission has clearly told the Georgian Government that it cannot become a candidate country if the Government does not respect the rules of true democracy.

“Georgia does not need a façade democracy, but a real democracy, where the opposition is respected, different opinions are respected, freedom of speech is respected, where there will be no politicized justice. The Georgian people deserve such a democracy, because it is the only way to join the EU. The European Commission has made it clear to the Georgian Government that Georgia cannot become a candidate country if it does not respect the rules of true democracy. The Georgian Government must listen to its own people and the advice of the European Commission. This is how democratic governments in the EU behave. I wish the Georgians to have a government that will not be an obstacle on the road to the European Union, but a leader of its people,” Kubilius said.

“You know very well that we are a bit critical of your government, of the situation in Georgia, but that does not change our relations, our desire that you make progress and become part of the European Union,” MEP Markéta Gregorova said while addressing a rally.

The MEP claimed that she fully supports Georgia and cares about its European future and European aspirations, and Georgian people deserve EU membership.

“You came today to show what you want in the future. Thank you for caring, thank you for coming. I fully support and care for your European future and European aspirations. I think you should get candidate status. You deserve EU membership. Of course, you know very well that we are a bit critical of your government, of the situation in Georgia, but that does not change our relations, our desire that you make progress so that you can become part of us, the European Union. Always remember, we stand behind you even in difficult times and when we are criticizing you. Stay strong, pro-European idealists, if it’s as important to you as it is to me,” the MEP said.

“Go back to the negotiations agreed with Brussels, consolidate the society and you will definitely win!,” Lithuanian MP Žygimantas Pavilionis told demonstrators.

“I have known for years that the Georgian people are the most pro-European in the world, and you deserve to be a part of the European family,” MEP Anna Fotiga addressed the protesters.