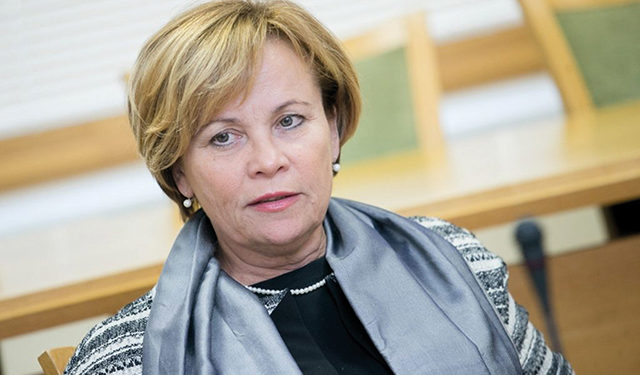 With an ever-growing list of challenges and problems both home and abroad, it seems that the issue of reinventing, or rather re-vitalizing, the Eastern Partnership has tumbled down the agenda of the European Union. This spells nothing but trouble for one half of six EaP counties that still have their sights on eventual membership: Cisinau, Kyiv and Tbilisi recently upped their efforts on the European integration front, establishing a trilateral TRIO format dedicated to the cause. What does the future hold for them, or indeed for the Eastern Partnership as a whole? And what of those that would see to it that there was no European future at all? These were the questions we asked MEP Rasa Jukneviciene in the second edition of the “Messages from Brussels” series, a joint project by the GISP and the European Alliance for Georgia (EAFG).

“With the creation of so-called TRIO format, I think it’s safe to group Eastern partnership countries in two distinct groups,” MEP Rasa Jukneviciene tells us. “One is the trio group, with Georgia, Ukraine and Moldova having firmly decided that they want to become part of the European Union, while the other group has different notions regarding the EU integration. Armenia and Azerbaijan, while unwilling to become a member country, still seek cooperation with the EU, while Belarus is a special story: One year ago I would say Minsk was without any perspective for a European future, but then we saw a nation born anew, a nation with the strong will to live in democracy. So sooner or later, of course, I think Belarus will also join Ukraine, Georgia and Moldova. I don’t know when it will happen in my lifetime or not. But I am sure it will happen.”

This despite the fact that under Lukashenko, Belarus excluded itself from the platform.
Yes. Yes, of course, this is now a temporary transition period, a very dark one. But they will overcome this in the future.

With the TRIO members, we’ve seen success in Moldova’s case, kind of a disappointment in Georgia’s case, and then there is Ukraine, which still has huge challenges to overcome. So what does the future hold for those three from today’s perspective?
Despite my concerns for Georgia’s turbulent development of late, I’d still say Georgia remains a leader in the region when we speak about democratization, Europeanization of the country, and I think Georgian people remain as willing as ever to stay on or be on the path for a European future. But despite that, I see this political crisis and very, very harsh and very divided political system. Even no ability to agree on the future of Georgia. When the highest decision-making level at the EU comes to help solving your political problems and it ends the way it did, it’s going to cause disappointment and harm Georgia’s Europeans integration prospects, surely. It’s not so easy to convince the majority of the countries in the EU that Georgia is able in future to become a member of the European Union, even without such things happening in Georgia.

As for Moldova, it today is, I think, becoming a spiritual leader among the countries, because they have very fresh news on the will of the people, elected leaders are very much pro-European. Ukraine is the most powerful geopolitically among Eastern Partnership countries, because of its size, because of its importance, geography, and that’s why, of course, the Russian Federation and Kremlin are making Ukraine a priority target.

I would like to ask about this EU membership bid that Georgia is preparing for 2024. It has been met with skepticism at home and abroad. What’s your take on it?
Let’s remember it’s a formal application, it’s not about granting membership then and there. It’s up to Georgia to make this step forward – I myself would strongly support it if your politicians were able to not only declare that they will ask for membership, but take concrete steps towards getting Georgia closer to Europe, to be an European country internally, stabilize the political system and so on.

What is the current Brussels approach to the Eastern Partnership platform – is it still as relevant as before?
First of all, I have to remind you that what is being said in Brussels is determined by what political leaders are doing or thinking in Berlin, Paris, Amsterdam, Madrid or Rome or other capitals, because it is most important to have as many countries as possible understanding the importance of the Eastern Partnership. And there are different opinions: the Baltic states, Poland, Romania, some others are supporters of the Eastern Partnership and are pushing to increase its political weight and importance.

Unfortunately, other capitals are not very much behind this idea. It also depends very much on the results of the first waves of enlargement. And I will be frank and open when people somewhere in Berlin see problems with Hungary, in terms of democracy, and ask, do we need more problems in the EU when we speak about new memberships?

The second important aspect is that now it’s impossible to do everything at once. So the Western Balkans have more support and had before since 2010. If and when the Western Balkans are invited, and this invitation and their integration is successful, it will help the Eastern Partnership to open minds in EU member states about the next steps. But while you wait, you have no luxury to relax – you have to be excellent. Even more excellent than we were before membership, I mean, Lithuania, Latvia, Estonia, because the situation was different at that time, there was less fatigue, it was more emotional, more positive, a more optimistic approach. It also happened at the very beginning of Putin’s era in Russia. You sadly are not so lucky.

Speaking of Putin, I think it’s high time that we discussed Russia’s role in Eastern Partnership, how they assess it.
It’s impossible to speak about Eastern Partnership without elaborating on Kremlin interests, because the Kremlin does stand behind the most troubles for these countries. But then again, I would like to underline that I myself, am optimistic. And I still I believe that in my lifetime, I will see a different Russia. I don’t agree with this notion in the West that Russians cannot live in democracy. I think that Russians, especially the young generation, can. And this is very important when we elaborate on the strategy of Russia in the European Union, because if we think that Russia is forever as autocracy, it means that we have to deal with Kremlin as it is, and do nothing at all for the future. But if we have another kind of approach which means that Russia can be different, then we can afford to look for a very different strategy, including the Eastern Partnership, to give opportunity to the countries next to the Russian border.

There’s a view that the current regime is, in many ways, limited by Putin’s lifespan and then when he’s no longer around, it’s bound to change. What’s your take on it?
I don’t think Putin is alone in this. In this regime, I see this as a system with Putin on top of the iceberg and many lower level actors, who are also very important. So I think that this pyramid of power, and they will try to keep it as long as possible, even without Putin.

Until we see this different Russia, I would like you to inquire just to what extent Russia can determine things in the European future of the Trio? How much of a game changer is the Russian factor?
Of course, Russia is trying to do everything to oppose democratization processes in the neighborhood, because it’s dangerous for the regime and hybrid warfare. Everywhere. In Georgia, its occupied territories act as a factor and leverage, then we have Russian influence in various structures, including, I am sorry to say, the Orthodox Church, but this happens not only in Georgia, in all other orthodox countries. Then we have the Kremlin using energy as a manipulation tool – with Nord Stream 2 being the latest instrument of the Russian Federation to have more influence. The Russian factor also affects many Western countries and politicians, and the only solution is not to be afraid, because Putin is very happy when he sees that leaders of many countries are afraid of him. And he is using such fear factor, especially in Eastern Partnership. And when we speak about the political will or support in the EU, of course, he is doing everything possible to spread as much fear as possible everywhere.

But when we look at Putin’s Kremlin influence, or what is happening, whether the Kremlin is winning or is scrambling to postpone its defeat, I think it’s the case of the latter. So maybe there are some victories in this short term period. But look what happened during recent years – Putin lost Ukraine for good. In Moldova he lost the last elections, one he was involved directly, through his proxy Igor Dodon. Any Belarusian understands that without Putin, Lukashenko would not have power in their country. Putin had quite high support in some European Union member countries. Now he lost even those, they are no longer asking for dialogue. In fact, they don’t like Putin at all.

Putin lost friends, Putin lost support, and it’s only because he has nuclear power and only because of that, because of fear, he is on the agenda. It is not possible to keep such a strategy for the long term. There’s no perspective. He is not building Russia, he’s destroying this huge country and his own nation.