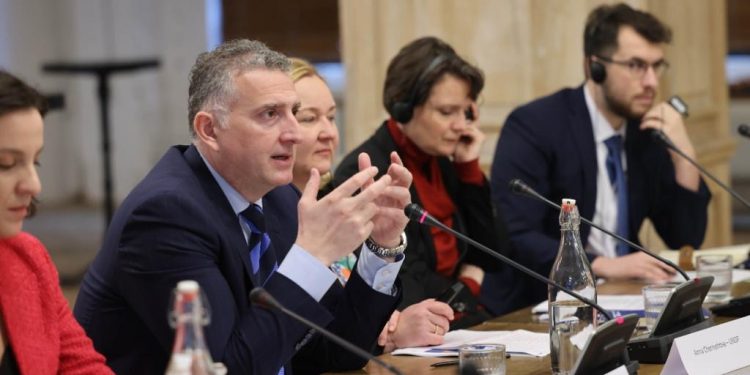 The meeting was opened by the Head of the Government Administration, Revaz Javelidze, the Deputy Resident Representative at UNDP, Anna Chernyshova, and the Team Leader for Governance and Human Capital at the EU Delegation in Georgia, Colombe De Mercey.
The members of the council were introduced to the new 2023-2026 Strategy for Public Administration Reform and its accompanying 2023-2024 Action Plan, which, on the council’s decision, will be referred for approval to the Government of Georgia. At the meeting, the process led by the Government Administration-seeking to develop the reform’s new phase and encompassing numerous meetings, discussions, and reviews-was summarized. The council’s member Deputy Ministers thematically introduced the meeting’s participants to the key directions of the strategy and the action plan.

The participants also discussed recommendations and views from local and international organizations on the successful implementation of the new Strategy and Action Plan for Public Administration Reform. Representatives of partner organizations reaffirmed their commitment to supporting the successful implementation of public administration reform in Georgia.

Public administration reform was launched in Georgia in 2015 with the purpose of shaping a transparent, accountable, and effective state governance system in the country. The reform seeks to upgrade Georgia’s public administration and draw it closer to European governance standards. The reform is grounded in the EU principles of public administration. In light of the country’s priorities, the reform encompassed one additional direction besides the key five directions. These directions are policy planning and coordination, civil service and human resources management, accountability, delivery of public services, management of public finances, and empowerment of local self-government.
Tags: Interagency Coordinating Council for Public Administration Reform
ShareShareTweet