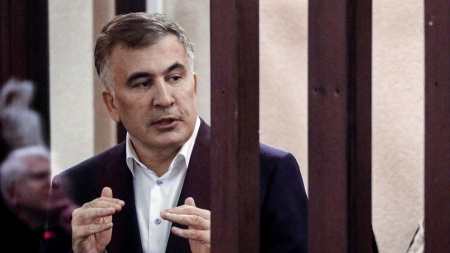 The conclusion of the medical council established under the auspices of the Public Defender reads that Mikheil Saakashvili has cachexia of the fourth degree, which may result in a severe prognosis for his life.

A group of experts made public the prepared report on Mikheil Saakashvili’s health condition at the briefing. Dr. Tengiz Tsuladze said it is significant that fundamental decisions be made – Mikheil Saakashvili “must be removed from this environment and transferred elsewhere”.

“We examined the patient on December 4. Compared to the previous examination, which we conducted in April, the patient’s condition had significantly worsened: We assessed it as severe. Deterioration was manifested in weight loss, the patient’s cognitive functions, muscle wasting, general weakness, the patient cannot stand up independently, and he finds it difficult to make contact. His cognitive sphere was also evaluated and it is also impaired, he has a fever. All this allowed us to consider such a severe complication of starvation as cachexia. But it was more anorexia than starvation. In any case, the patient claims that he is not hungry, he has nausea and cannot swallow food.

“During cachexia, the metabolism is accelerated even more and a sharp worsening of the condition is expected. He can now be diagnosed with stage 4 cachexia, which may result in a severe prognosis for life.

“Although the patient was treated in various multidisciplinary clinics, relevant laboratory, instrumental studies and treatment were performed, the condition still worsened rapidly, especially during the last months, and we believe that fundamental decisions should be taken at this stage,” said Tengiz Tsuladze.