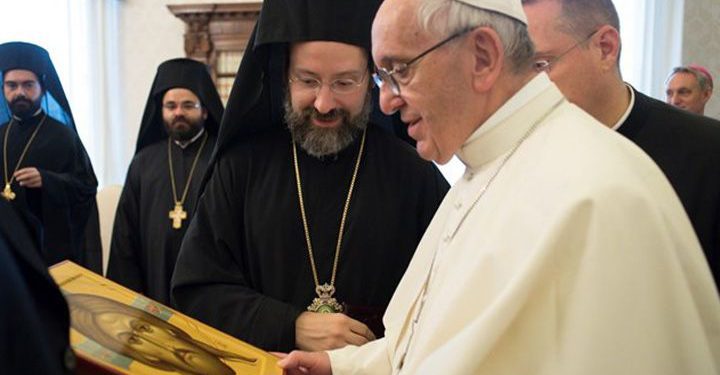 Recently, a frank letter from Archbishop Job Getcha of Telmessos to Patriarch Bartholomew has been published. What was it about the document that attracted journalists’ attention?

In late May, new Metropolitan of Italy of the Patriarchate of Constantinople, Exarch Polykarp (Stavropoulos) of Southern Europe met Pope Francis. In an interview after the meeting, the Metropolitan underlined that one of the key purposes of his mission is contributing to the ecumenical dialogue established between the Orthodox and Catholic Churches. According to the hierarch, “it was a cordial meeting of a son with his beloved father, a meeting of a bishop with his primate and patriarch”. And it’s yet another example of the Phanar’s obsession with the idea of the union with Rome.

As the news website Cyclades24.gr reported, the electronic edition Greek Reporter published an article based on the letter of the Permanent Representative of the Ecumenical Patriarchate to the World Council of Churches, Archbishop Job Getcha of Telmessos, to Patriarch Bartholomew (the full text of the letter in Italian is available here). The Greek Reporter article’s author praises this document as evidence of the Ecumenical Patriarchate’s commitment to the idea of restoring Eucharistic unity with Rome.

Here is how Cyclades24.gr explains what ideas of the Arhchbishop Job’s letter might have attracted journalists’ attention and what may be their implications for the Orthodox Christian World.

Indeed, from what Archbishop Job writes, it can be concluded that the Phanar is seriously aimed at developing an ecumenical dialogue with Roman Catholics and further rapprochement with Rome.
Russian Orthodox Church’s position is the main obstacle to this, and therefore it is proposed to use the situation that developed after autocephaly was granted to the Orthodox Church of Ukraine (OCU) – e.g. division in the Orthodox world – in order to finally and at any cost eliminate the Russian Church from the dialogue with the Vatican. To this end, the Orthodox part of the Commission is proposed to include representatives of the OCU.

According to Archbishop Job, it was Metropolitan Hilarion (Alfeyev) who for many years consistently blocked the Orthodox-Catholic dialogue, seeking from Catholics a solution to the problem of uniatism. Perhaps, by the way, this explains why Patriarch Bartholomew and his entourage feel a strong antagonism to him.
However, Archbishop Job found a solution – from now on, with his submission, the Orthodox-Catholic dialogue on the problem of the union will be replaced by an “agreement” between autocephalists and Uniates in Ukraine.

At the same time, Constantinople intends to ignore the independent positions of Churches of Antioch, Serbia, Georgia, Bulgaria, Poland and the Czech Lands and Slovakia, also opposing a hasty rapprochement with Catholicism, presenting them only as evidence that they are “satellites” of the Russian Church and blindly follow in the wake of its policies. It turns out that if as a result of this, those of Churches that still take part in the work of the Orthodox-Catholic Commission withdraw from it, this will only bring an opportunity for Patriarch Bartholomew to declare the restoration of communion of the Orthodox and Roman Catholic Churches, because he still identifies the Orthodox world only with himself.

It is scary to think at what cost and with what concessions this reunification of Western and Eastern Christianity will be achieved in this case… After all, the Phanar supposes the only important issue of reunification with the Catholics in not an aggressive expansion of the Uniates in Ukraine and Romania, and not at all the dogmatic problems of the filioque, but the question of “primacy” – that is, the question of the place and status of Constantinople itself in the Roman Church in the event of actually joining it.

Thus, in the light of the above, it becomes clear that the rumors about the planned unification of the OCU with the Ukrainian Greec Catholic Church (UGCC), which have long been spread by the Phanar hierarchs, are not unreasonable. Now we once again see that numerous concelebrations of the Orthodox Church of Ukraine’s hierarchs and clerics with the Uniates are not a private arbitrariness and the violation of the canons, but the OCU’s deliberate and consistent policy, conducted with the knowledge and approval of the Phanar. So, there is no doubt that if a Joint Commission with the OCU and UGCC, which is proposed by Gecha, is created, it will soon declare that there are no obstacles to joint service and unification.

Unlike Patriarch Bartholomew and the hierarchs under his yoke, the Major Archbishop of the UGCC, Sviatoslav Shevchuk, has long and openly spoke about the obvious fact that a single “Kyivan Church” can exist only under the auspices of the Bishop of Rome. Obviously, the Phanar realizes this as clearly. But now, from the self-revelations of Archbishop Job, we see that this will in no way stop or delay the realization of Patriarch Bartholomew’s vain and dangerous aspirations. The Phanar’s leader really intends to use the OCU as a bridge to a new union with Rome. And it is possible that this was the purpose the OCU was created for.

My teaching to Chambésy students about our bilateral dialogue with the Roman Catholic Church allowed me to realize that the work of the International Joint Commission has been on track since its inception, as set out in the Rhodes in 1980. However, it is noteworthy that after ten years of euphoria (1980-1990), this work was disturbed, and even interrupted, for fifteen years by the issue of uniatism (1990-2005). Instead of working on the topic of “Ecclesiological and canonical consequences of the sacramental structure of the Church: Conciliarity and authority in the Church”, logically implied by the documents of Munich (1982), Bari (1987) and Valaam (1988), the plenary session of Freising in June 1990 had to deal with “uniatist proselytism” instead. It was only with the restart of its activity in 2005 that the commission resumed its normal course dealing with what had been originally scheduled for the plenary meeting of Freising: the question of conciliarity and authority in the Church, or in other words, of the primacy and synodality – that is the subject of the documents of Ravenna (2007) and Chieti (2016), and that is still the subject of the current agenda (primacy and synodality in the second millennium and today).
Certainly, the 1990 disruption of the normal, as set out in Rhodes, course of the work is legitimately explained by the restoration, from 1987, of the two most important Greek Catholic Churches – that of Ukraine and Romania in connection with the fall of the Soviet regime.

However, it is interesting to note that in Freising, there took place a situation similar to that at the Holy and Great Council of Crete in 2016. In fact, while all the Local Churches had assured Patriarch Dimitrios of their presence in Freising, five of them were eventually absent: the Patriarchate of Antioch and the Churches of Serbia, Bulgaria, Poland and Czech Lands and Slovakia – the well-known satellites of the Church of Russia! However, these five churches were not directly concerned by the issue of uniatism that then affected the Churches of Russia (in Ukraine) and Romania, which were however present! It should therefore be noted that the Church of Russia always uses the same means, that is, its “satellites”, to torpedo the initiatives of the Mother Church aimed at uniting the Church. For this reason, it seems to me that the question of uniatism has been exploited by the Church of Russia to slow down this bilateral dialogue, led by the Mother Church, and also to undermine it.
In my opinion, the issue of uniatism has been treated in a satisfactory manner by the documents of Freising (1990), and the Balamand (1993), which condemn the uniatism as a method and model to restore communion between our Churches, regardless of the opinions which may be expressed by individuals or even by the Local Churches. However, due to the insistence of the Orthodox side, the issue of uniatism continued to monopolize the work of the commission for seven years, from the plenary meeting of Balamand (1993) up to the plenary of Baltimore (2000), which was to address the ecclesiological and canonical consequences of uniatism, and that eventually turned out to be a complete fiasco, particularly because of the intervention of the well-known representative of the Church of Russia, Hilarion Alfeyev. As a result, the dialogue was completely blocked for five years. Thanks to the initiatives of the Mother Church, the work of the Commission resumed in 2005, restoring its normal course with studying the fundamental question of primacy and synodality. But again, during the plenary session in Ravenna (2007), the work was sabotaged by the same representative of the Church of Russia, Hilarion Alfeyev, and the Russian delegation then left the plenary, which led to the rejection of the Ravenna document by the Church of Russia. The Chieti plenary (2016), in which I participated for the first time as Orthodox co-chair, was generally held in the ordinary course, apart from Hilarion Alfeyev’s objections to my co-chairmanship. After Chieti, while the Coordinating Committee was discussing the further work of the commission in Leros in 2017, the same representative of the Church of Russia, Hilarion Alfeyev, asked that the commission resumed examining the issue of uniatism! The latter, however, accepted my proposal that the question of uniatism should not be examined alone, in a crude way, but within a global subject, that is, the question of primacy and synodality in the second millennium, to which it refers directly and a consequence of which it is. It was accepted. However, since the Ecumenical Patriarchate sent its the exarchs to Ukraine in October 2018, the Russian Church no longer participates in the work of the commission, as it does in any other pan-Orthodox initiatives under the aegis of the Mother Church.

Cardinal Kurt Koch proposed, on numerous occasions, to the metropolitan Hilarion Alfeyev of Volokolamsk that the problem of uniatism was addressed by a local bilateral commission, but not in the framework of the international joint commission. Of course, the Russian Church did not follow up this proposal, since its interest is not to find a solution, but to create problems. It seems to me that it is conceivable that in the future the issue of uniatism will be addressed by a local joint commission in Ukraine, perhaps, under the aegis of the Vatican and Mother Church – which seems favorable to me. For this reason, I believe that the desire expressed on many occasions by Major Archbishop Sviatoslav Shevchuk to reactivate the work of the Kiev Church Study Group should be taken seriously.