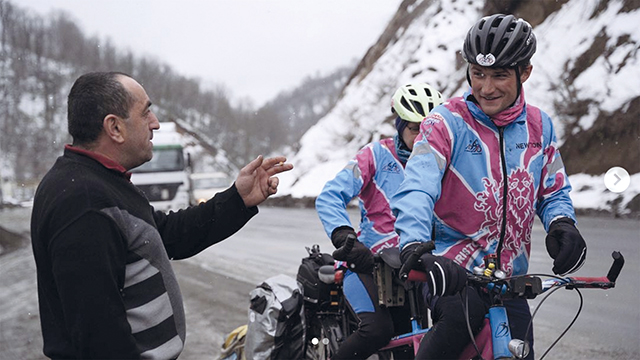 Since the outbreak of the pandemic, few tourists have set foot in Georgia, and Luke Grenfell-Shaw is perhaps the only around-the-world cyclist to arrive in the country since the start of the pandemic.

The coronavirus outbreak is not the only factor which makes Luke’s journey unique. Luke is cycling as a ‘CanLiver’, someone who is living with cancer, facing uncertainty and challenge daily, whilst acknowledging they can still live a rich and full life. With fresh snow reminding Tbilisi that spring hadn’t quite taken control, I sat down with Luke to hear about his trip.

Luke set off to ride 30,000 kilometers from Bristol to Beijing at the beginning of 2020, unaware that a pandemic would render travel extremely challenging.

“Borders have been difficult,” Luke says. He had to change his route to keep up with changes, cycling around Hungary and to the east of Ukraine, only to find the border to Russia was shut.

“Instead of finding it frustrating that I have to do an extra 500 kilometers because a border is closed, I tried to think differently,” Luke explains. “I’m cycling during a pandemic; a lot could go wrong. I didn’t think I would get further than Germany.”

Whilst teaching English in Siberia in 2018, Luke noticed an ache in his shoulder. At first he presumed it was a pulled muscle, but after a nurse showed concern, he decided to fly back to the UK for further tests, where he doctors told him he had stage four cancer at age 24.

Following the diagnosis, Luke decided to commit to his life-long dream of cycling around the world.

“Receiving a cancer diagnosis can feel like a death sentence. I’m doing this ride to show it’s possible to live your dreams, even with cancer,” Luke explains. “But you’ve got to create your own opportunities – no-one else will do that for you.”

But first, to stand a chance at fulfilling this dream, he had to undergo chemotherapy. During his treatment, Luke kept fit and healthy as a way to keep control of an aspect of his life.

“My attitude was that I wanted to give myself the best chance of getting through chemo, and looking after my body through exercise and diet were going to help the most.”

During the first round of chemotherapy, Luke also tragically lost his brother, John, in a climbing accident.

Despite this, Luke’s outlook is positive: “I feel enormously lucky to be doing this when so few people are traveling. I’m aware that what I’m doing is very different,” he tells me.

The journey so far has taken him through 18 countries to Tbilisi. True to Georgia, locals have treated Luke to large doses of hospitality as he rode from Batumi to Tbilisi.

“It was snowing, and I stopped before a tunnel to turn my lights on and some guys who were clearing snow invited me for tea. It was the most amazing hospitality.”

Luke often wild camps on his trip, but things don’t always go to plan. In Austria, he camped next to the Danube and decided to wash in the river.

“I’d just stripped everything off when, all of a sudden, this speed boat came around the corner. That was bit awkward,” he says with a grin.

During his journey, people have invited Luke into their homes many times. On his final night in Turkey, he stayed with a host in a small hut on a strip of land between the highway and the Black Sea.

“He cooked us meat and beans for dinner, but a few hours later, I felt my stomach churn. I tried to tell myself it was fine, but eventually my body rejected most of the bean stew we’d eaten.

“The next morning, my host was determined I would have lunch, and you can guess what was on the menu – bean stew,” Luke recalls, grimacing.

Luke rides a tandem bike and invites friends, family, other CanLivers and locals to join him for parts of his journey. His mum flew out to ride with him in Georgia. How did they experience the notorious Georgian roads?

“I think they’re fine, to be honest, everyone seems to pride themselves that their roads are the most dangerous – I’ve known worse,” he says.

Luke aims to inspire other Can-Livers to lead fulfilling lives and raise awareness about the CanLiver movement. He’s raising money for cancer-related charities too. You can follow his remarkable journey through the Bristol2Beijing podcast and donate on his website (https://www.bristol2beijing.org/) or Instagram @bristol2beijing.