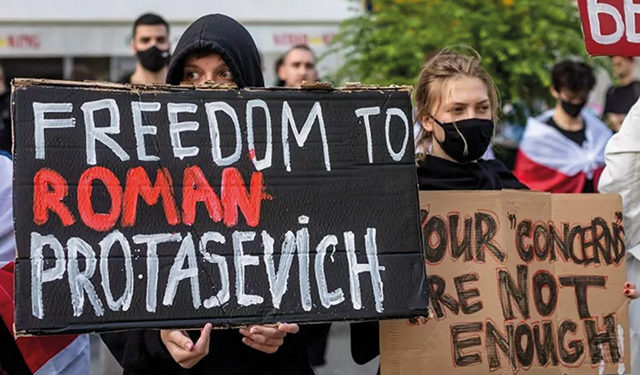 On May 18, Belarus’ most popular internet portal TUT.by was shut down. In addition to the editorial office, journalists were also searched and 15 employees of the newspaper were arrested.
There is no rest for the wicked, they say, and if it’s indeed true, then Belarus strongman President Alexander Lukashenko might just be suffering from acute insomnia. Shutting down TUT.by evidently couldn’t sate his appetite, though, as, on Sunday, May 23, he committed a direct act of state terrorism: a Belarusian fighter jet forced a Ryanair flight, which was flying from Athens to Vilnius, to land at Minsk Airport. After the forced landing, passenger Roman Protasevich, founder and ex-editor of the opposition Telegram channel Nexta was promptly arrested.

While the West plans a new round of sanctions, the pivotal question puzzling analysts and opinion-makers alike is what is on Lukashenko’s mind? Why is the self-proclaimed president so willing to aggravate things even further? Especially in a situation where active protests in the country have been suppressed and his power, at least in the immediate future, seems no longer threatened? These were the questions GISP asked Maria Avdeeva, Research Director at the European Expert Association.

The Protasevich incident has already been dubbed an “act of state terrorism,” and inducted Lukashenko into an increasingly narrow group of international pariah leaders. Is there a way out of this for him to ever be considered as a legitimate political figure again?

The crimes committed against his own population after the 2020 elections already made another rapprochement with the West very unlikely. However, one shouldn’t still completely rule it out: previously, Lukashenko got away with even killing his political opponents. And yet, this last incident might just prove to be the final step that went too far. If there is any winner in this situation, it’s Russia – as the already miniscule field for dialogue between Lukashenko and the West has diminished further, and now he is even more dependent on Russia.

It also highlights the impact of the 2020 protests on the Lukashenko regime, of its transformation. Whereas previously there was room for “system liberals,” now they have been entirely replaced by the “Siloviki”. But relying exclusively on the Siloviki has its own peculiarities. Now, the Belarusian regime is doomed to search for new enemies – the siloviki need a trademark outer threat to demonstrate their indispensability. And although, in the short term, this helps to keep the situation under control, it simultaneously shortens the regime’s days. The political system built by Lukashenko is gradually moving into self-destructive mode.

Shutting down Tut.by, kidnapping Protasevich – Lukashenko might think he is winning a battle but might he be losing the war?

He is losing the war against his own people, as his position becomes more and more precarious, with precious little room for political maneuvers. In the eyes of the Belarus people, he is already an outcast, no longer one of their own. He might himself entertain notions to the contrary, and console himself with thoughts that there are no large scale protests anymore, his naysayers are in jail, that he succeeded to terrorize a whole nation into submission, but there is no way for him to get the trust of the people back. That bridge was burnt long ago, and it’s only a matter of time before he starts losing the battles as well.

His decree provides for the transfer of presidential powers to the Security Council of Belarus in the event of an emergency. What are the implications of such a move?

He himself dubbed it a “historic decree”. It’s a military junta scenario; it tells the Belarusians “whatever you do, nothing will change. If I am no longer around, the military will rule the country.” He wants to give the impression that he has everything under control, that nothing will happen and his regime will stay in power. It’s also a precaution: if things go pear-shaped for him, he doesn’t want all his power to be in one person’s hand, which constitutionally would be the Prime Minister. On the foreign policy front, it’s also a bow towards the Kremlin, indicating that Lukashenko’s past bargaining with the West might be truly over and that now he is firmly in their grasp.

For decades, Lukashenko was seen as trying to make his Presidency hereditary. given the current situation, is this scenario still on the cards?

I think it might be shelved, but that doesn’t mean it has been cancelled altogether. He is very worried about his sons, his family – by now, these might well be the only people that won’t betray him given the chance. If Russia doesn’t guarantee their well-being and safety, he should take care of that himself. As for transferring presidential powers to his offspring, I am sure he still entertains the notion, but his youngest son, whom he reared for such eventuality, is still too young. Trouble came knocking at Lukashenko’s door earlier than he’d have liked.

We need to discuss the so-called “assassination” attempt as well- what was that all about? Who buys the narrative that the West ordered Lukashenko’s death?

Supporters of Lukashenko, and to an extent, Putin, more or less do believe what they are told. Especially the older generation for whom the state-run TV channels are the main source of information. Another thing it accomplishes is distraction from actual events and, obviously, giving the Kremlin propaganda, another lever to use in their Anti-Western rhetoric. Even Putin mentioned it in his speech in front of the federal assembly.

I’m very worried about the Belarusian people. What we are witnessing now exceeds any limits. 15 journalists in jail at the moment, charges all politically motivated, and tomorrow this number could rise to 150. And Lukashenko will keep on going – he sees the reaction from the West, but seems to think it’s a risk worth taking.

There was a leaked conversation where his top level Siloviki were discussing creating quasi-concentration camps for “untrustworthy” opposition figures – after Protasevich’s arrest, it no longer seems so unthinkable. Especially considering that Lukashenko is a long-time admirer of the Soviet Union and probably more knowledgeable than most about Stalin’s methods.

He’ll probably be forced to make some concessions to Moscow. Could one such be recognition of Crimea, Abkhazia and South Ossetia?

The probability of that is quite high; there has been a constant pressure on Lukashenko from the Kremlin to make that happen. Unlike with the West, Lukashenko is still wary of burning bridges with Ukraine, and to an extent, with Georgia. Minsk as a place for mediation, and Lukashenko himself as the middleman between warring countries – that’s a chair he’s most comfortable sitting on and will be very loath to part with.

Additionally, Ukraine is one of Belarus’ biggest economic partners, and if he were to go that route, he’d have to suffer the Kyiv sanctions, which will hurt him more than the Western-imposed sanctions do. Ukraine and Belarus share a one thousand km long border – alienating such a neighbor is not in Lukashenko’s interests, and it’s not the same as throwing vague threats at the proverbial West. Were it to happen, though, I doubt such recognition would carry much political weight internationally – if anything it would further cement Lukashenko’s image as a dictator.

Natalia Kutateladze – Finalist for BBC Cardiff Singer of the World