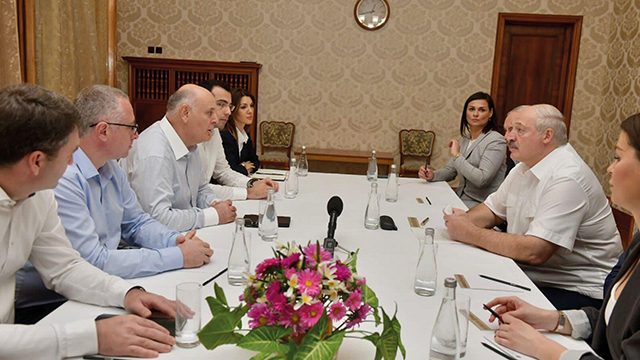 The so-called president of occupied Abkhazia, Aslan Bzhania, met with the president of the Republic of Belarus, Alexander Lukashenko, on Wednesday.

It was Lukashenko’s first time entering occupied Abkhazia while in office, though Belarus does not officially recognize the independence of the occupied Abkhazia or Tskhinvali regions.
Bzhania’s press service reports that the meeting took place at Bichvinta country house.

At the meeting, Lukashenko noted that the “issue of Abkhazia” had been discussed at the meeting held the day before with President of Russia, Vladimir Putin.

“Yesterday, we discussed the problems of Abkhazia with our elder brother Vladimir Putin. We were discussing these issues till late night and we came to the conclusion that Abkhazia cannot be abandoned. It needs help so that this prosperous land and the people who live here can live normally,” Lukashenko said.

He added that Belarus and Russia are “coordinating their actions.”

“Today, more than ever, we see what the world has turned into. We will not be allowed to live in peace. Therefore, we should strengthen relations with our friends,” Lukashenko said.

He claimed that he wants to establish “serious relations” with Abkhazia.

“Abkhazia is heaven on earth, and the people are saints. We want to build not only a bridge of friendship with you, but also very serious relations,” Lukashenko stated.

Reactions from the Georgian side to the Belarusian president’s visit were understandably negative.
PM Irakli Garibashvili: “I strongly condemn Aleksandr Lukashenko’s visit to the Abkhazia region occupied by and meetings with the Russian occupation regime. This step violates the law on occupied territories and contradicts international law as well as bilateral relations between our countries.”

‘For Georgia’ party leader, Giorgi Gakharia: “I strongly condemn President Lukashenko’s visit to Russian-occupied Abkhazia. It is an obvious violation of territorial integrity and sovereignty which needs a strong response from the government and international community. We all should be firm in addressing such violations!”

Georgian President Salome Zurabishvili: “I strongly condemn Aleksandr Lukashenko’s visit to occupied Abkhazia. This is an unacceptable violation of Georgia’s Law on Occupied Territories and the principles of our bilateral relations and international law.”

Former PM Giorgi Kvirikashvili: “Shameful step by a marginalized leader of Belarus Lukashenko – to act as a puppet of even more marginalized drowning head of Russian state Putin. NO ONE can change the destiny of Georgians and Abkhazians, to peacefully live in united Georgia – hopefully sooner rather than later.”

Minister of Foreign Affairs Ilia Darchiashvili: “President Lukashenko’s arrival in Bichvinta in occupied Abkhazia/Georgia in violation of Georgia’s Law on Occupied Territories is unacceptable. We strongly condemn this unlawful action. Fundamental principles of int’l law must be followed.”

The Georgian Foreign Ministry on Thursday summoned the Ambassador of Belarus to Georgia following Lukashenko’s visit to the occupied Abkhazia region.