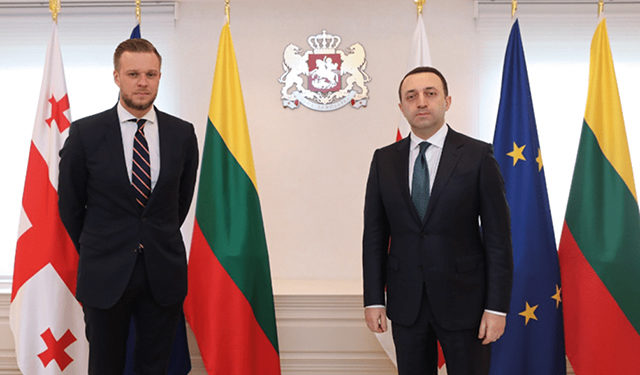 I had 35 meetings, a handful of interviews, three runs and five PCR tests. [I’m tired], but if needed, I would pack my suitcases again tomorrow and come back. – Gabrielius Landsbergis

Lithuanian Foreign Minister Gabrielius Landsbergis, on a busy visit to Georgia prior to the Georgian Easter break, held meetings with the President of Georgia Salome Zurabishvili, Prime Minister Irakli Garibashvili, new Speaker of Parliament Kakhaber Kutchava, and the Vice Prime Minister and Minister of Foreign Affairs David Zalkaliani, amongst others.

Landsbergis and the Georgian leaders discussed the ongoing reforms in the country, preparations for the next Eastern Partnership summit scheduled for autumn, topical issues of bilateral relations, the security situation in the region, and emphasized Russia’s destructive role.

Before departure, Landsbergis issued a statement on social media summing up his visit, where he noted that more Europe is needed in all three countries of the South Caucasus.

“Three South Caucasus states, different troubles; one repeating phenomenon. Russia’s influence is growing throughout the South Caucasus region. Armenia sees Russian soldiers in its territory as a result of Azerbaijan’s possible aggression. Is it real, uncertain, but Russia is ‘voluntarily’ introducing additional capacity into the country. It’s nasty because it reminds me of the 1940s in Lithuania,” Landsbergis wrote.

“Since 2008, Russia has been fortifying the occupied territories, introducing new soldiers, building bases in their territories. After looking at the whole region, it looks like Russia is creating a “Kaliningrad”: strongly militarized enclaves whose help can threaten further military intervention or at least present regular political challenges. Experts from all three countries unanimously agree that the withdrawing of the United States from the geopolitical world, the European Union’s caution, and the growing Russian military power in the region, poses a threat of redrawing the map. That’s why all three South Caucasus countries need more Europe,” he emphasized. “Europe is a soft power and that’s exactly what the South Caucasus needs. Europe must go back to where the Eastern Partnership began 10 years ago. If we don’t find a way to get back, soon there may be nowhere to go back to.”

Turning to domestic issues, Lithuania’s Foreign Minister spoke about the recent signing of the Michel Agreement which got most of the opposition back into Parliament.

“The agreement reached on 19 April will ensure the stability necessary to achieve ambitious goals. Therefore, I call on the country’s political forces to come to a compromise and to effectively implement what has been agreed,” he said.

He also voiced Lithuania’s support for Georgia’s aspirations for NATO and EU membership and stressed the need to continue the reforms necessary for the integration process. Landsbergis noted that Lithuania would continue its versatile support for Georgia in implementing the reforms provided for in the Association Agreement with the EU, especially in the areas related to the EU Green Deal and the country’s resilience. Officials of both countries agreed to cooperate more closely to prepare for the next Eastern Partnership Summit, and to set ambitious EaP goals. In this context, Landsbergis noted that it was important for Georgia to coordinate with fellow Associated Partners, Ukraine and Moldova.

When speaking about challenges to the South Caucasus regional security, both Landsbergis and the Georgian officials agreed that the greatest threat was posed by the aggressive posture that Russia had taken, and the continuing occupation of Georgia’s territory. The Lithuanian diplomat promised continued support for Georgia’s sovereignty and territorial integrity, and that he would seek to actively raise this issue in the international arena.