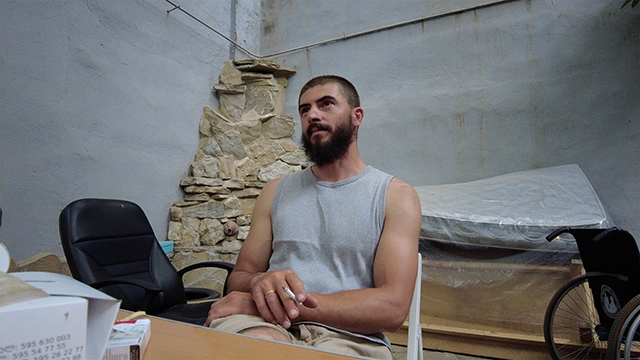 Georgian conservationist, Nika Kerdikoshvili, who is working in Lagodekhi to protect the Caucasian Tur

This weekend, researcher and film-maker Saxon Bosworth is releasing his new film “Like an Animal” (ცხოველივით) the story of Georgian conservationist, Nika Kerdikoshvili, who is working in Lagodekhi to protect the Caucasian Tur. The Tur is a wild goat species living in the Caucasian Mountains, whose numbers have suffered greatly in recent decades due to poaching.

“Nika, who grew up as a hunter, had some dramatic experiences with wildlife in his youth which altered his path, including the killing of a brown bear, the impact of which he discusses in the film,” Saxon tells GEORGIA TODAY. “He went on to trade his rifle for a camera, and uses his mastery of tracking and bushcraft to do crucial conservation work.

“A recent photo he took of a Caucasian Tur fighting off a wolf in the high mountains, the first such photo ever taken, brought him the attention of the BBC and other international media,” he adds.
Film-maker Saxon Bosworth grew up in Cambridgeshire in the UK, and, after graduating in International Business, worked in Paris, France, for two years.

“Losing my job just before Covid pushed me to really evaluate what I was doing with my life,” Saxon tells us. “For years, I’d been running around taking pictures, mostly of sunrises and sunsets, but always with a vision of experimenting with documentary film. During the pandemic, I began researching the Aral Sea, and eventually set off to Uzbekistan in October 2020 with quite a naive intention of making a documentary about the environmental catastrophe. My team and I have been working on this series for around two years now, and in the next few months this documentary will be entered into film festivals, and hopefully be viewable to the general public at the end of the year/start of 2023.” [For more info on this, see: missionfindaral.com and the (recently released) trailer.]

“Having been educated about Georgia whilst in Central Asia, I began to learn of its rich and diverse environments and biodiversity,” he says. “However, I came here with only one contact, and with no expectation of what I was going to find. Eventually, through a long chain, I connected with Ilia State University and two PhD students who I have now spent the summer working with: Nika Kerdikoshvili, who works with the Caucasian Tur, and Nika Paposhvili, who works with the Velvet Scoter in Tabatskuri (where I am now), a thought-to-be regionally extinct species of duck – a film on his work and story will follow later this year. You can listen to a conversation I had with him here.”

He tells us he had no expectation of what he would film when coming to Georgia, that it is a “principle” of his.

“I do lots of research, but I don’t project what I anticipate or desire to find; I simply observe. As a single individual working on these projects in Georgia, with limited resources, I feel the only way I can create something of value is to invest my time and brain entirely, which has resulted in me doing expeditions throughout the entire summer, and living in Tabatskuri specifically for more than 6 weeks.”

We ask him about the challenges he faces in his work.

“There are some challenges, mostly economical,” he says. “However, I am unbelievably grateful to be able to fight to continue to do this kind of work, so I won’t dwell on the challenges heavily. I will say that being from one of the flattest places in the UK, high altitudes have a toll on my body, and require constant adaptation. This year, I have really had to understand how to take better care of my body, due to diet, constant travel, altitude, etc.”

The film “Like an Animal” will go on Saxon Bosworth’s YouTube channel, where there is already some of his other work.