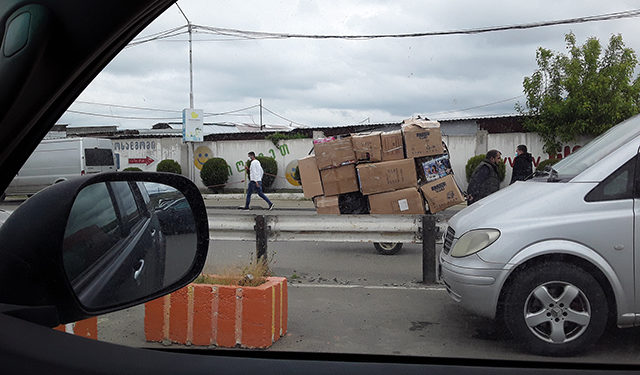 Kakheti… already in full spring mode, while back in Svaneti, there would be several mornings of hard frost in our absence. At least the fruit trees’ flowers seem to have bounced back from January’s debacle of RAIN followed by inevitable deep freezes. So there might be a temperate fruit harvest after all: apples, sour and sweet plums, cherries the same, pears, walnuts. We hope.

My wife and I had some days in the east visiting friends and relatives (the joy of having one’s own car, especially when little public transport is to be had with the Lockdown). Then more of the same in Tbilisi; it’s rare that we are both there together, so we wanted to maximize this opportunity to catch up with everyone that we could.

The day before returning to Svaneti, we got up early and drove to Lilo (pronounced lee-low), the original Mall of Georgia, to stock up for our shop. This acres-wide, sprawling 1-story emporium, made of many hundreds of individual stalls and buildings, is the biggest and cheapest place in the country to buy almost anything. For luxury items you might want to go to specialists elsewhere, but for the everyday stuff, if your list is long, this is the go-to place. It’s on the Kakheti highway, past the airport; coming from that direction, you drive past it, then U-turn at the next lights. Go early to avoid busyness. There normally is public minivan transport from a few places in Tbilisi, but not during lockdown, of course.

You enter across one of those scary sets of protruding metal spikes which are strictly one-way. They go down harmlessly into the ground if you drive over them in the right direction. Reverse that, though, and you’ll have at least 2 (possibly all 4) tires punctured in multiple places. Hats off to the inventor of this simple device to control traffic flow: so simple and effective! You’ll exit elsewhere, so all is fine. Parking used to cost 3 GEL (coins only, pay on exit), but is currently free.

Then to find parking, for which there are vast areas set aside. It’s best to have a shopping list because if you just browse (unless that’s your preferred mode), it might be quite a time-waster. At least now the whole place is mapped out, main zones marked with alphabetic letters, their individual shops numbered. This is helpful if there are two or more of you. One can phone the other(s) and describe one’s location exactly if you need to converge.

My wife’s way of shopping with me is that she, being our shop manager, goes around and buys everything, but asks to leave each set of goods in its shop for a while, which is common practice. Then, when she is ready to gather it all up, she phones and asks me to meet her at the car. Hiring one of the ubiquitous cart drivers, she the revisits all her locations, has him pile it all up, and they go to the car to unload. She and I pack it carefully for the long journey back to Svaneti. I must be able to see out the back window (something she, as a non-driver, doesn’t fully understand but I try to insist on for the long trips). Heavy and solid things on the bottom, lighter and fragile ones on top, trying for maximum stability as well.

The Mall has a full set of facilities for its customers and shop-owners. Toilets, of course. Eateries, mostly featuring shawarma and shish kabobs; coffee, tea, soft drinks. Ladies also continually wander the whole place with more hot and cold drinks and khachapuri or ice cream. There are banks, police, traffic controllers, all the infrastructure employing thousands could need, really.

There are a few special shops which have unique items. At one, you can buy fire extinguishers and esoteric electronics. Here I found, and had wired up, a set of over-counter LED lighting for our kitchen’s upper cupboard undersides. This has become simpler and much easier over the years. Originally, it needed a converter from 12 volts to 220, a bulky box specially wired in. The LED strips were thick plastic, though they worked well, and you had to nail or screw them in place. Now you can buy much thinner, lighter ones with a separate plug and on-off switch (no more voltage converter needed); in half- or 1-meter lengths which snap together. Get a roll of strong double-sided tape too, and you’re all set. I have an older version in place in Svaneti, but this one is for our Tbilisi flat, much more elegant and easy.

As for the rest: manufactured goods of all types and descriptions, at the best prices, but usually with no guarantee, beware! Clothing, furniture, tools, appliances, toys, stationery, accessories, hardware, software, plumbing, electrical and so much more. Lilo really is The Mall. Worth checking out!