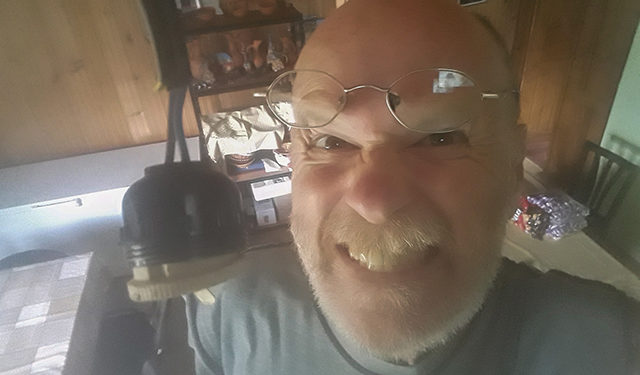 Now, plumbing and electrical work are two things I really hate even trying to do. The former at least does not offer the prospect of instant shock or electrocution or worse if you get it wrong, but it too stretches what I call my quotient of “mechanical patience,” which is dismally low. Sometimes, however, needs must, so I plunged into rewiring a light bulb socket in our guest dining room today. Yesterday I had warmed up my confidence level on making a toilet mechanism work, so I figured that in the absence of the usual electrician upon which to call, he being in faraway Zugdidi, I would attempt this next hurdle solo.

While the wife was away at school, I found the necessary socket from our shop inventory and began experimenting with it, taking apart its minuscule screwed-together components and trying to memorize how they fit together into the whole. It was not at all difficult, however, to get the thing wrong, which I proceeded to do in several ways on the path to success. I had to stand on a table and reach up to the ceiling-mounted wiring, and with several tiny parts to coordinate, found myself wondering how electricians manage, or even like, this work.

I had to strip two thin wires of their plastic covering with a knife, exposing the copper “business part,” actually made of many hair-thin strands, which I then twisted together to keep them as one. Then to bend this around and back on itself, and screw it into place on the socket. Having made the mistakes of assembly aforementioned, I finally resorted to comparing my item’s wiring setup to an already properly done one in the same room.

Dropping 3mm-length screws several times and having to hunt for them on the floor on hands and knees, I was reminded of a passage in the cult classic book, Zen and the Art of Motorcycle Maintenance, which I dig out and re-read once every few years. The section is called Gumption Traps, and refers to unnecessary mistakes which the person doing a repair or assembly job can make which steal all the joy or good feeling out of the proceedings. If I was doing this work over a deep-pile carpet, for example, I would have huge frustration over losing screws in it. Best practice would be to have some sort of hanging mini-container nearby, into which I could simply reach and take out the part I needed. But I was satisfied with the compromise.

Eventually, I got the thing right in comparison to its neighbor, feeling that even my thin fingers are hardly suited to such work; my mouth doubled as the temporary container when called on, and nothing got swallowed, even. The moment of truth came when I turned the switch… and there was light! I then had to call back my electrician neighbor, whom I had asked to come tomorrow and do this job, because I had accomplished it myself. The feeling was quite profound.

Having succeeded does not make me suddenly an electrician, I am totally aware: I still don’t know my way around volts, amps or watts, for example, or what should be a ground-wire. But these are baby steps I am taking, not standing still. YouTube can be a great help in getting previously unknown skills too, with literally millions of searchable video clips in its how-to sections. So I have hope that, even 10 years from official retirement age, this dog can learn something new.