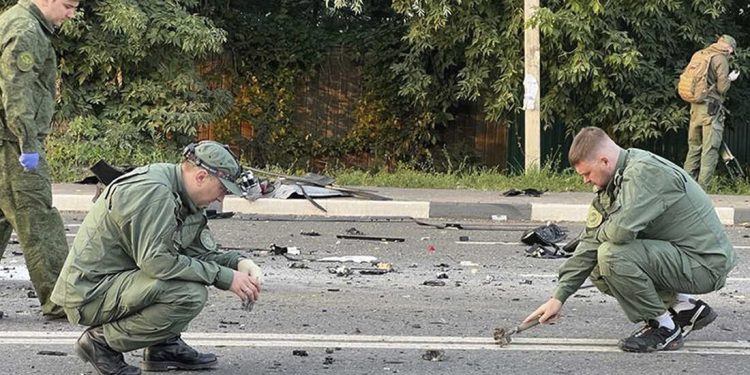 The daughter of a key Kremlin adviser was killed in an explosion while driving near Moscow, a dramatic attack that became a new flash point in the six-month war.

The daughter of Alexander Dugin, referred to as Russian President Vladimir Putin’s “brain,” was killed in a car explosion in the Moscow region, according to Russia’s main investigative authority, which said it was opening a criminal murder investigation. Daria Dugina, 29, was reportedly driving her father’s car from a festival they had both attended when the vehicle erupted in flames, reported Russia’s state-run media outlet Tass.

Ukraine denied involvement and suggested it could be the result of an internal dispute within Russia.

“I emphasize that we certainly had nothing to do with it,” Mykhailo Podolyak, adviser to Ukrainian President Volodymyr Zelensky, said Sunday on Ukrainian television. Dugina had been sanctioned by the United States as part of a list of Russian elites and Russian intelligence-directed disinformation outlets, alongside her father, who has been designated for sanctions since 2015.

This week marks six months since the invasion, Zelensky noted in his nightly address. It also brings the nation’s Flag Day on Tuesday. He hinted at the prospect that Russia this week “may try to do something particularly nasty, something particularly cruel. Such is our enemy.” The city of Kharkiv will be under curfew all day on Ukrainian Independence Day on Wednesday, its regional governor, Oleh Synyehubov, said. Kyiv has banned mass events from Monday through Thursday, Ukraine’s parliament said.

Meanwhile, the key battlefield developments are as follows:

Russian shelling in a small central Ukrainian city killed at least one person, injured seven others and destroyed homes and a school building, local officials said. The Sunday strike, in the Dnipropetrovsk region, is at least the second major attack on the area, which has come under increased fire as the standoff over the nearby Zaporizhzhia nuclear plant has escalated.

Drone attacks, including one on the headquarters of Russia’s Black Sea fleet, were reported in Crimea on Saturday. The governor of Sevastopol, a Russian appointee, said a drone hit the roof of the fleet’s headquarters after Russian forces were unable to shoot it down. But he later reversed his claim, saying in a “clarification” on Telegram that the drone was struck and landed on the roof, catching fire. “There was no defeat,” he wrote. The claims could not be independently verified.

Russian forces’ attempted advance toward the southern city of Mykolaiv, which they have shelled repeatedly in recent days, has seen “partial success,” the Ukrainian army conceded in one of its regular updates. Moscow’s soldiers occupy a small settlement less than 30 miles from Mykolaiv, but “combat is ongoing,” the army reported.

Western leaders discussed the Zaporizhzhia nuclear plant Sunday. According to a White House statement announcing their phone call, they shared their desire to “avoid military operations” near Europe’s largest nuclear plant. They also advocated for the International Atomic Energy Agency to assess the area’s safety systems as soon as possible.

Putin said he supports allowing United Nations experts to inspect the Zaporizhzhia nuclear plant “as soon as possible” and agreed to provide “necessary assistance” during a call with French President Emmanuel Macron. However, Moscow has rejected broader requests to withdraw its military from the site, and has accused Ukraine of shelling the facility and preparing to cause a “radiation leak” there.

Two more ships carrying grain and sunflower oil left Ukraine over the weekend, Turkey’s Defense Ministry said. They left the port of Chornomorsk, close to Odesa in southwest Ukraine, bringing the total number of ships to have sailed out under an UN-backed deal to 27.

The United States has presented to NATO officials instruments of ratification for Sweden’s and Finland’s accession to the military alliance, Secretary of State Antony Blinken said. The war has seen moves to expand NATO, and Blinken said handing in the documents was “the final step in our process to have these important partners become vital NATO Allies.”