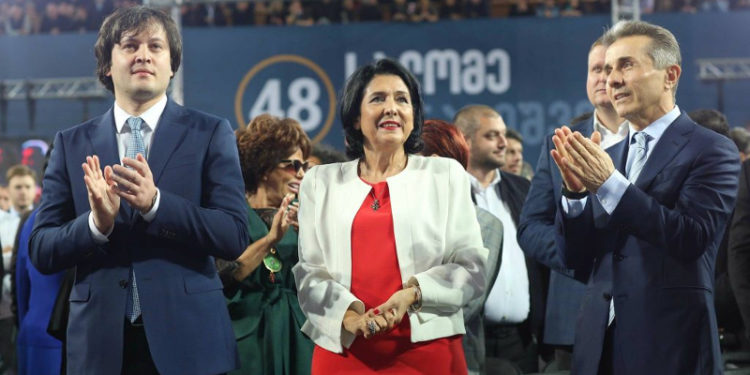 Irakli Kobakhidze, Chairman of the Georgian Dream, says he does not know what the President wants.

He thus responded to Salome Zurabishvili’s statement that the government had refused her a visit to France, Poland and Ukraine, where she was to hold meetings regarding getting Georgia EU candidate status. Zurabishvili said that the European integration process must not be interrupted either by Saakashvili, Gvaramia, or Ivanishvili. The Chairman of the ruling team says Zurabishvili’s statement regarding the European Union is irrelevant when she mentions Saakashvili, Gvaramia and Ivanishvili in one sentence.

Kobakhidze noted that the Georgia­n Dream did not understand Salome Zurabishvili even when they were assisting her in the presidential election campaign.

“I really do not know what the President wants. We were directly involved in her presidential campaign, the whole process lasted about 45 days, and we could not understand what was she saying, when and why, but we still managed to win the second round of the presidential election. The statement she made specifically about Bidzina Ivanishvili was morally difficult to listen to. It is absolutely unheard of when Saakashvili, Gvaramia and Bidzina Ivanishvili are put on the same plane. It turns out that Salome Zurabishvili has to defend this country from Bidzina Ivanishvili. The man is out of politics. Leaving this aside, there are several factors from a moral point of view, when the issue of candidacy in the presidential elections was discussed, the initiative to nominate a candidate belonged to Bidzina Ivanishvili. Given that the President is a symbolic figure in a parliamentary republic, the focus was on symbolism in the first place. The emphasis was on the fact that she was a representative of the old diaspora and 100 years later, after 1918, in 2018, it was symbolically important that a representative of that diaspora became a President of Georgia. The second, the female President was a kind of expression of our historical tradition, an aspiration to continue this tradition. In addition, a person from European diaspora who becomes President, a woman, a European – this was the symbolism on the basis of which, in the end, the focus was on Salome Zurabishvili and the choice on her candidacy was made. This was Bidzina Ivanishvili’s initiative and if it were not for this initiative, in this case Salome Zurabishvili would have been an ordinary member of Parliament. Let’s take this moral side. As for the content itself, when Salome Zurabishvili discusses Saakashvili, Gvaramia and Ivanishvili in one context, I do not even know how it can be assessed. Beyond that, her assessments regarding the EU are becoming absolutely irrelevant. The first part of this statement is so grave that I would not comment on the second part at all,” Kobakhidze stated on Imedi TV.