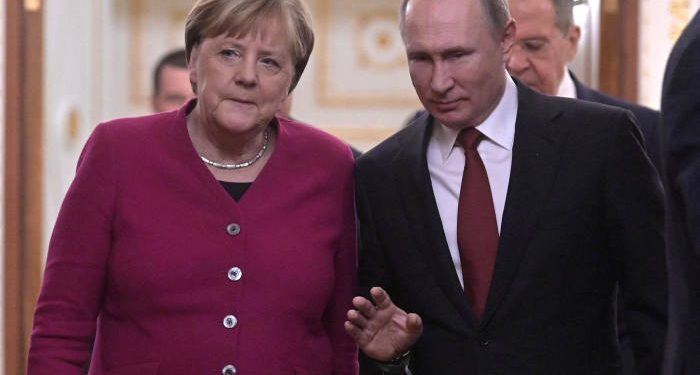 Germany’s stubborn insistence on engaging with the Russian leader in the face of his sustained aggression, a catalog of misdeeds ranging from the invasion of Georgia to assassinations of enemies abroad and war crimes in Syria, was nothing short of a catastrophic blunder, one that will earn Merkel a place in the pantheon of political naiveté alongside Neville Chamberlain – wrote Berlin-based Matthew Karnitschnig, POLITICO’s chief Europe correspondent, in a piece aptly named “Putin’s Useful German Idiots.”

RFE / RL’s Georgian service spoke with Karnitschnig to explore the intricacies of the relationship between the former German Chancellor and Putin, as well as Germany’s overarching policy on the war in Ukraine and the much-debated U-turn of its Russia approach, something the Politico journalist has observed over the years in Berlin. Vazha Tavberidze talked to Matthew Karnitschnig from Prague.

“Merkel will probably leave this episode for her memoirs,” Karnitschnig muses. “But one thing that’s happened over the past couple of weeks is that her advisors have started bickering and blaming each other for Merkel’s policies. Christoph Heusgen, her former foreign policy advisor and now the chairman of the Munich Security Conference, and Lars-Hendrick Roller, her chief economic advisor, are pointing fingers at each other, saying they weren’t responsible for this policy.

Merkel isn’t the only Western leader to have a special relationship with Putin – French President Macron is on phone every day pleading with him to stop the war. And yet, Putin personally denied Macron’s request for a French–led humanitarian corridor in Mariupol. Germany used to and still gets a lot of stick for its reluctance to be tougher on Putin. So, how should Macron’s effort be rated in that regard?

It’s clear Macron is doing this partly because of the upcoming presidential elections in France. I don’t think he’s that cynical for that to be the only reason though-  I think he does feel he is actually doing something to make a difference by continuing to engage Putin, but then again, he hasn’t given anything away to him. He doesn’t have the power to do so. The difference between what he’s doing and what Merkel did for so long, is that Merkel wasn’t just talking to Putin, she was making concessions along the way by allowing North Stream 2 to go ahead, for example, and by not imposing tougher sanctions on Russia after Crimea and the war in Donbas. Macron hasn’t made any concessions like that to Putin. And considering the situation in Mariupol, his efforts to create a humanitarian corridor there are laudable. If that’s the one thing that he could have achieved, these calls would have been worth it. So, yes, unfortunately, it hasn’t worked out. But I don’t think that he should really be in the same company as Merkel.

I don’t think Macron should really be in the same company as Merkel – Unlike Merkel, he hasn’t made any concessions to Putin

What will the events of Ukraine do to Merkel’s legacy in Germany and abroad?

Let me just preface this by saying I’ve always been somewhat more skeptical about Merkel’s record than many of my colleagues, especially towards her foreign policy, not only because of the way she handled Ukraine but also because of the way she dealt with other crises, like Greece, for example. I don’t think she’ll have much of a legacy at all. I always thought that history would eventually take a very critical view of her time in office. And I think the war in Ukraine makes that absolutely clear now – even the German commentators who were very laudable towards Merkel in the past have woken up to the fact that her decisions led to this disaster. And it’s not just a disaster for Ukraine, it really is a disaster for all of Europe. And I think a lot of it goes back to her policies, unfortunately.

You mentioned other crises – Georgia, not only Ukraine, also has a say on both Merkel and Steinmeier. How impactful was 2008 and the Berlin refusal at the Bucharest Summit?

2008 was absolutely crucial. The Bucharest Summit was a hinge moment in history and, unfortunately, at that time, the decision didn’t get as much attention in the West as it should have. The West was preoccupied with the tensions in the Middle East, so there was not much of a focus on Europe. The same can be said about the invasion of Georgia.

There was recently an interview with Merkel’s former chief military advisor Erich Vad on German television, and he basically acknowledged that it was Merkel who was the main voice resisting giving the MAP to Georgians and Ukrainians. The French just went along with her, Sarkozy just tagged along.  It’s an unspoken consensus that if on international stage either France or Germany finds itself isolated, then the other will vote with them so it doesn’t look like they are isolated. I don’t think this was an issue that Sarkozy felt particularly strongly about at the time, but to back up the Germans, he decided to join them. German resistance led to this. It’s been documented that Bush tried to convince Merkel when she was in the United States, early in 2007. Yet, you can see the influence that Putin’s speech in Munich 2007 had on her, as she sat right there in the front row. It must have really resonated with her.

Another important issue is German history and her East German roots, as she was someone who thought, like a lot of German politicians, that she could understand the Russians, while others, such as us, couldn’t. That might be true to a certain degree, they do have more familiarity, but in this case it led her to make a fatal error. And everything that happened since sort of flows from that decision, and now, you have people in Germany saying, “Oh, well, if we had done it back then, if we had agreed to allow them a MAP, there would have been a war right away in Ukraine, and Russia would have attacked back then.” We’ll never know, obviously, but if you look at the performance of the Russian military in Georgia, and how disastrous that was, it’s hard to imagine that that they would have succeeded in in taking control of a country the size of Ukraine with the military they had at the time.

How durable is the German U-turn, this Zeitewende, going to be? Will the old businesslike approach make its return once hostilities are over? I don’t think it is durable in the sense that I don’t think that Germany can have a leadership role here, as long as the people who are in power now remain in power, because they are the same people who are responsible for these decisions. The Social Democrats for years backed all of the decisions that Merkel made, as members of her coalition, the so called grand coalition between the Christian Democrats and the Social Democrats. And Steinmeier, in particular, was the main architect of the Minsk deal, which was also a disaster. I don’t think any of these people have much credibility. As recently as mid-December, Chancellor Scholz was arguing that Nord Stream 2 was a commercial project, repeating the exact talking points that Merkel used to say – that it doesn’t have anything to do with geopolitics, that it’s just a private sector matter. I just don’t think that they have any credibility here, and it’s going to be very difficult for them.

Germany has a lot to work on here –  they made a big announcement, one made out of panic, because they saw that everything that they had been arguing for the past 20 years was false. They made all of these promises, but they have yet to fulfill them. They haven’t spent 100 billion on defense, they’re still debating the details of it. I think it might end up just as a U-turn in the rhetoric. But whether they actually follow through is another matter, and you’re already seeing the cracks in that front, with people questioning “Do we really need to spend this much money?” and so on. It is important to remember that the 100 billion that they’re talking about is something that they want to spend over four years. The question is, what happens after that? They’re going to need to keep spending, because 100 billion, all that does is compensate for what they didn’t do over the last decade plus. So it’s not like you can flip a switch: there are much deeper problems here. That is what is going to be very difficult for the Germans to resolve, because they don’t have a security culture in the country, and that’s why they don’t understand a lot of what’s happened here.

And then there is the Russian gas issue – will it persist with Germany?

Yeah, that’s not going anywhere. This is why Schultz is drawing the line, they’re saying, “Well, we can’t just switch off Russian gas overnight.” They’re talking about reducing their dependence on Russian gas by 50% by the end of the year, but I don’t see that. It’s a PR measure that they’re throwing out there. Given their reliance on Russian gas and how they attached to it most of the German infrastructure, it’s very difficult to wean yourself off that system. You know, they don’t even have one LNG terminal, and they won’t for a very long time. So the dependence on Russian gas is going to remain.

They’re also saying they might be able to give up Russian oil, which is also very important to Germany. They might be able to cut that off, but there’s no way they can do the same with gas – it’s just too important for German industry. And the unfortunate irony is that critics and other observers, like myself have been saying for years “You have a fatal dependence on Russian energy!” and they always denied it. And now we’re seeing it play out.