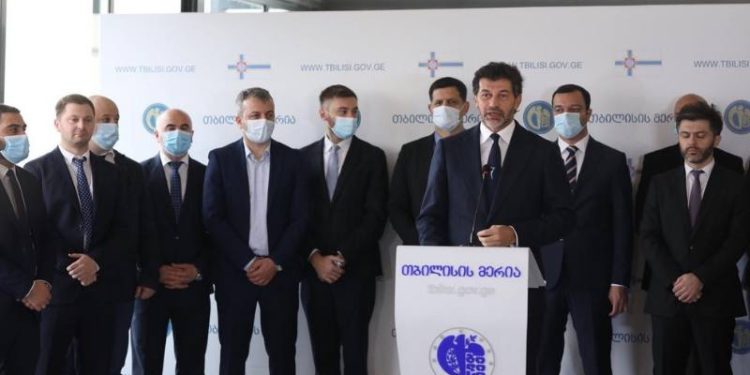 On November 30, Tbilisi Mayor Kakha Kaladze presented the Vice-Mayor, Deputy Mayors, Head of Administration, and Heads of the Municipal Service at a briefing.

“Irakli Khmaladze is again presented as the Vice-Mayor, who, during the past years, has made a great contribution to the regulation of the transport system and the implementation of other major reforms. Irakli is really a very valuable staff who is always looking for new spaces for the development of our city and even in a seemingly hopeless situation finds an optimal solution in favor of the interests of our city and its citizens,” Kaladze said.

Ilia Eloshvili was appointed as the Deputy Mayor, Kaladze thanked him for solving the problem of unfinished constructions and the people affected by these constructions.

Andria Basilaia took the position of Deputy Mayor, Kaladze noted that he played a special role in the proper conduct of the City Hall – social, education, and cultural policy.

“I would like to inform the public about the leaders of such important areas as urban and transport policy, architecture, and the Tbilisi Development Fund. The heads of these areas are not approved by the Tbilisi City Council, although they play an important role in the development of Tbilisi. Tbilisi’s urban and transport policies are still led by Victor Tsilosani, who in recent years has proven that he can successfully manage this very responsible and important area;

Mr. Levan Jgharkava is the head of the Tbilisi Development Fund; Irakli Tavartkiladze will again be the head of the Property Management Agency; Teimuraz Bolotashvili will be the head of the architecture department, who has done a lot in recent years to improve this direction and bring it up to modern standards,” Kaladze said.