Kakhaber Kemoklidze: Any Sort of Civil Disobedience Should Come Not with a Top-to-Bottom Principle but from the Opposite 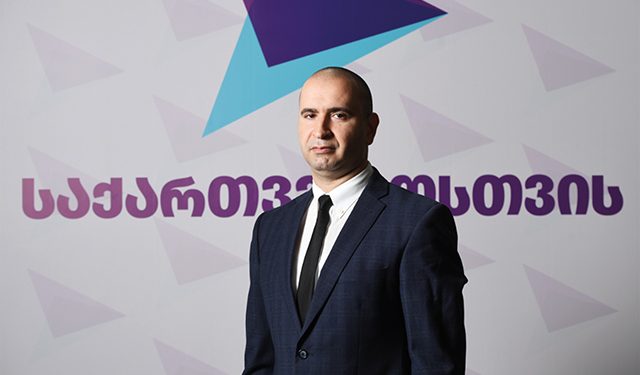 Political Secretary of the “For Georgia” party, Kakhaber Kemoklidze

As September draws near, the announcement of the renewal of protests and civil disobedience made by Zurab Girchi Japaridze of the “Girchi More Freedom” party becomes more real. GEORGIA TODAY continues to discuss this initiative with multiple political parties to determine whether it has the potential to become a game-changing movement or is just another predestined-to-fail protest. This time, we interviewed the political secretary of the “For Georgia” party, Kakhaber Kemoklidze, to get the answers to this and other vital questions.

Will your party join Zurab Japaridze and his party in the new wave of protests and civil disobedience?
In my understanding, any civil disobedience should come not from the top-to-bottom principle but from the opposite. The big mistake that the political leaders are making in this statement is that they think calling for civil disobedience will make society take this individual wave seriously and bring them out into the streets. That doesn’t happen in this country: Society itself decides when they need to come out. When they want to create a wave of civil disobedience, it’s going to come naturally, organically. No-one needs civil disobedience unless society decides the time has come for it.

The solid, firm ground laid for Georgia’s future institutional development will mean that GD will either be obliged to share power or, at some point, leave it

If the country doesn’t go the European way, in the course chosen by Georgian society, through the constitutional margins, everything is possible. But the statements made by different political elites of the oppositional spectrum are something different, and are exactly what the Georgian Dream ruling party wants to hear; it is precisely what they are promoting through the media channels controlled by them.

Politicians should be cautious in their wording so as not to create any perception in the Georgian community that there will be no stability when the current ruling party is removed from the political landscape. I always call for evolution and not revolution. The statements made by Zurab Girchi Japaridze are dangerous because they actually play on the ground of the Georgian Dream at the end of the day.

Do you see the sudden arrest of the former deputy head of the Special Security Services, Soso Gogashvili, as a signal for your party, formed mostly by former officials of power structures, that some of you may be next?
We consider Georgian politics like a box of chocolates: You open it, and you never know what you’re going to get. You’ve got to be ready for everything. Anything can happen when you enter the vast minefield of the political landscape here.

Don’t you think giving Ukraine and Moldova candidate status was unfair while leaving the leader of the “Trio”, Georgia, with likely impossible-to-fulfil recommendations?
Within the last three decades, different Georgian governments have invested a lot in the prosperous European future of this country, and, of course, it would have been great news for me as an individual Georgian citizen to hear that, together with Moldova and Ukraine, we were granted candidate status. But at the end of the day, we have what we have. It’s a fait accompli, already on the table. The most significant danger is if we split from the Associated Trio. If the Georgian Dream party fails in this regard, it would be a disastrous and very dangerous mistake.

I don’t feel that Georgian Dream is motivated to fulfil the EU’s 12 recommendations. They know that if they work on these recommendations, Georgia will be open to institutional change and development, and the solid, firm ground laid for Georgia’s future institutional development will mean that they’ll either be obliged to share power or, at some point, even leave power. They will do everything to avoid the responsibilities on the one hand, the oppositional spectrum on the other hand, and the European bureaucracy.

The opposition criticizes the government for being reluctant to react to the growing inflow of Russian tourists. Do you believe that our government is risking the safety of its citizens?
I think the government has no sense of the actual danger that might be coming from the uncontrolled and unmanaged inflow of Russian tourists. We are living in an extremely dangerous geopolitical time for many reasons: For the ongoing war in Ukraine and for the other security challenges what we, as a state, as a country, have been facing for many, many years, among them the occupation, different challenges coming from other parts of the region, etc. So, I don’t have the sense that the government realizes the real difficulties that can come with the Russian tourists.

As an ex-intelligence official, I know the technical, infrastructural and human resources of the Georgian security apparatus. When we have such a significant inflow of Russian tourists, you need to know who those coming in are, their profiles, their typical modus operandi, what sort of network they might establish over here, on the Georgia soil, right now. This geopolitically turbulent time might be even more dangerous than expected.

Days ago, the daughter of Alexander Dugin, “Putin’s Brain”, died in a suspected car bombing. The FSB already named a Ukrainian citizen responsible. What do you think Russia will do in response?
As an intelligence analyst, I think the precise aim is to increase the radicalized sentiments against Ukraine within Russian society. Whether the clear goal was to somehow ready the country for military mobilization, I don’t know; it might be the reason. The Russian political spectrum is already struggling to justify the war in Ukraine because they are losing a lot through military equipment and human resources. So, as long as this war is prolonged, those losses will increase, and Russian society is already starting to struggle with justifying it.

Those who were real soldiers with experience, for example, in Georgia in 2008, have failed to achieve any success in Ukraine. Do you believe that creating a “Mongolian Horde” of Russians will have an effect?
The stakes are so high that I believe Russians, particularly in the Kremlin, might go ahead with such dangerous exercises. Their human resources are extremally limited, and I believe there is clear evidence in this regard. They mobilize different mercenaries, men under 50, and even prisoners, but they are still moving very slowly. Even on the Eastern front, in Luhansk and Donetsk. In this context, to get the extra resources, Russia needs to create a solid narrative in the minds of Russians. We might see different bombings and other assassinations; we might even see artificial false-flag operations, calling Ukrainians Nazis and radicals to justify unpopular actions against Ukrainians in the future.