Josep Borrell: Why and How the EU is Supporting Ukraine 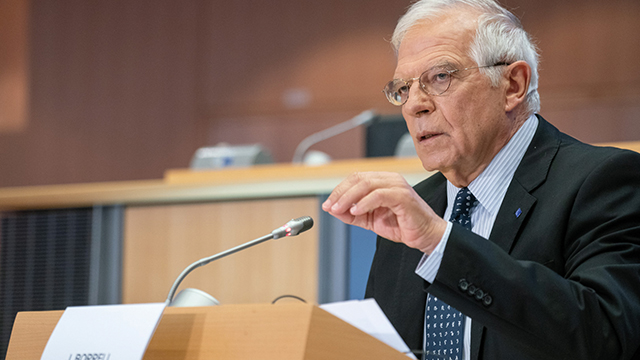 Security and the conflict in Ukraine were the main topic at the Foreign Affairs Council on 19 April, says EU High Representative for Foreign Affairs and Security Policy Josep Borrell in his blog, published the day after the meeting. EU foreign ministers exchanged views on Ukraine and were joined via video conference by their Ukrainian counterpart, Foreign Minister Dmytro Kuleba.

“Tensions are rising fast in and around Ukraine. At the Foreign Affairs Council, we sent a clear signal of our collective support for Ukraine’s sovereignty and territorial integrity in front of Russia’s military deployment and its continued negative actions and provocations,” Borrell wrote.

The High Representative says reforms in Ukraine were also in the focus during the meeting. He highlighted that the EU has mobilized more than €16 billion in support of reforms since 2014, making Ukraine the biggest recipient of EU financial support: “Ukraine has made a lot of progress, but more remains to be done, in particular on anti-corruption and judicial reforms.”

Borrell added the EU would continue to support Ukraine in combating the pandemic. “Last Friday, COVAX delivered 117,000 doses of COVID-19 vaccines to Ukraine, and is scheduled to deliver almost 3 million doses of vaccine by the end of June. As we don’t stop repeating, the EU is a strong supporter of vaccine multilateralism and one of the biggest contributors to COVAX,” said Borrell.

Read his blog below:
“Once again, our monthly meeting of EU Foreign Ministers had to be held via video-link because of the enduring pandemic,” he wrote. “And we devoted, yet again, a lot of attention to the growing tensions on the eastern part of our continent. This time, our core focus was on Ukraine and how we can best support that country, as it faces a growing array of challenges. Chief among them is Russia’s continued, even increased, military presence.

“I had invited the Ukrainian Foreign Minister Dimytro Kuleba to join us so that we could hear directly his assessment of the challenges that Ukraine is facing and how the EU and its member states can best tailor our already substantial support. Our exchanges covered several aspects.

“First, security and the conflict in Ukraine. For years now, Ukraine has been facing Russian aggression. Moreover, Kyiv’s steps towards conflict resolution are not reciprocated by Moscow. What is especially worrying is the military build-up in the proximity of the Ukrainian border and in the illegally annexed Crimea. There are more than one hundred thousand Russian troops amassed. With G7 partners, we have called on Russia to stop this dangerous escalation. In addition, Russia has announced the closure of certain parts of the Black Sea until October 2021, for military maneuvers, which is another provocative move and violates the freedom of navigation as guaranteed by UN Convention on the Law of the Sea (UNCLOS).

“From my side, I stressed that we must commend Ukraine for its restrained response; we must continue to urge Russia to de-escalate and defuse tensions, and we should all push back on Russia’s attempts to portray itself as a mediator, rather than a party to the conflict.

“We reiterated our strong support to Ukraine’s sovereignty and territorial integrity and our insistence on the need for the full implementation of the Minsk agreements.

“Escalating tensions require both a principled stance but also intensified diplomacy. We agreed that we should speak with one voice bilaterally in our conversations with Russia and in all relevant international fora, the G7, the OSCE, with the US, and pass coordinated messages of steadfast solidarity with Ukraine. We will keep supporting the efforts in the Normandy format and the OSCE including its Special Monitoring Mission, and peacebuilding measures. Now is the time to de-escalate. We are keeping these developments under close scrutiny, and we should stand ready to look into our options should the aggression continue.

“Looking ahead, President Michel and myself have confirmed our participation in the Summit on the International Crimean Platform planned for 23 August in Kyiv, which will be an important occasion to keep the spotlight on the illegal annexation of Crimea as well on our broader support for Ukraine.

“Second, we discussed reforms. Ukraine has made a lot of progress, but more remains to be done, in particular on anti-corruption and judicial reforms. Indeed, reforms make Ukraine more resilient and stronger and that is why we have mobilized more than €16 billion in support of reforms since 2014, making Ukraine the biggest recipient of EU financial support. With Minister Kuleba, we agreed that Ukraine’s economic integration and regulatory approximation with the EU is beneficial for Ukraine’s trade and economy.

“Discussing Ukraine of course also means reflecting on the situation in and with Russia. Unfortunately, the negative trend that we have seen for some time in Russia continues. The treatment of Mr Navalvy is a key illustration. I went to Moscow in early February to raise the issues directly with the Russian leadership but Russia has clearly opted to persist in its course.

“This has now led to a very worrying situation with respect to Mr Navalny’s health. We have made clear that we expect him to receive the medical care that he needs and from doctors he trusts (which is only logical given that he’s been poisoned before). We will hold the Russian authorities accountable for his fate.

“I have set out earlier that Russia is disconnecting from Europe. As the EU, we need to and we will draw the consequences, upholding the principles underpinning European security and supporting partners that share our interests and values,” Borrell concluded.