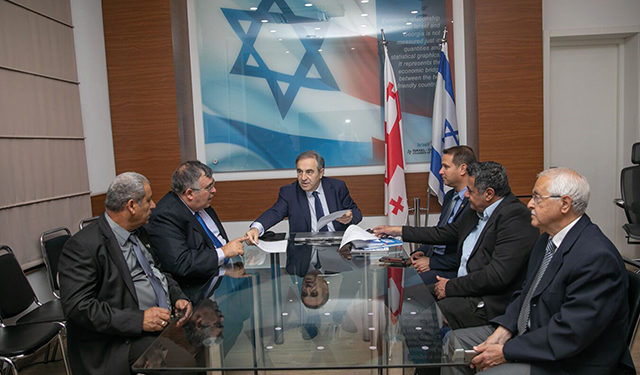 At the invitation of the Israeli House, an Israeli delegation led by David Bitan, Head of the Friendship Group with the Georgian Parliament in the Knesset, visited Tbilisi. The delegation, which includes the mayor of Rishon LeZion, a leading city in Israel, will take part in the events of the Israeli House on May 13-15. In particular, on May 13, in the Varketili district of Tbilisi, a joint event of the Tbilisi City Assembly and Israeli House is planned – the opening of the “Georgian Schindlers” Memorial. The memorial was placed in the newly built park on the initiative of Revaz Sokhadze, a majoritarian MP. The park will soon be named after the Georgian Schindlers based on the appeal of Israeli House. Contribution of AEPJ (The European Association for the Preservation and Promotion of Jewish Culture and Heritage) is noteworthy, since there is ongoing support for these types of events from their side.

At the initiative of Israeli House, a picture of Anne Frank was painted on a 30-meter wall in the park with Georgian and Israeli flags, as a background. A few months ago, the guests of Israeli House – Israeli parliamentarians – took part in the planting of the park.

The presentation of the book “Zionism Against All Odds” will be held on May 14 at the Wyndham Grand Tbilisi Five Star Hotel in Tbilisi. The book, published by Israeli House, is based on documentary material. It tells the story of a great Aliyah of historical significance to Israel, Georgia’s role in the process, and hitherto unknown details of the World Jewish Agency’s and its representatives’ mission in the Soviet Union. The event will be attended by the Israeli delegation, Georgian politicians, prominent members of the public, and Israeli and Georgian media.

On May 15, the Israeli delegation will visit Akhmeta, where the Mayor of Rishon LeZion, Raz Kinstlich, will sign a friendship agreement with Mayor of Akhmeta Municipality (Kakheti region). 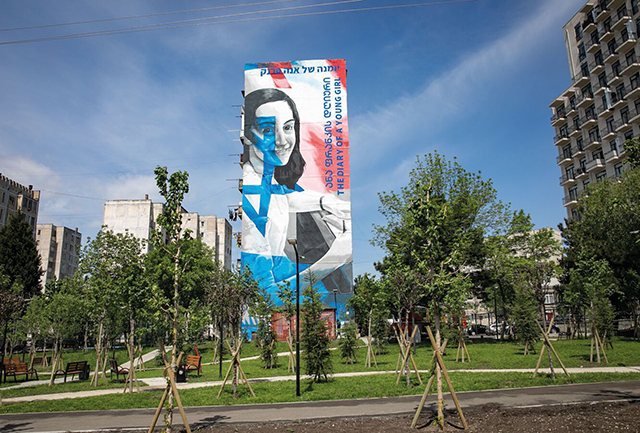 “Against the background of challenges, we do not have the luxury of being on standby. The non-governmental sector sees the needs in relations in all areas even better, so in our initiatives, we try to precisely define the interests of the parties. There can be no ideal environment until you create it. Therefore, in parallel with our initiatives and activities, I expect the activity of various agencies to be able to resolve various issues. I believe it is possible,” Moshe said, adding that the head of the friendship group with the Georgian parliament is paying a visit today, who has made a significant contribution to strengthening connections. At the same meeting, David Bitan spoke about the importance of the planned events – “Teaching the history of the Holocaust in Georgian universities, launching Israeli cabinets, opening a memorial to the victims of the Holocaust and the Georgian Schindlers is a very positive signal from a friendly country, not only for Judaism, but also for the state of Israel”.

He also noted – “Thanks to Revaz Sokhadze, member of the Tbilisi City Council, for supporting the Israeli House initiative to open a memorial to the Georgian Schindlers. I personally planted a few trees in this park. I know that a similar memorial was erected in Oni two years ago under the leadership of Israeli House. Everyone who visits these places will become Georgian ambassadors to the world,” and added: “I am proud of my connection to this country and I am confident that future generations will continue to have such a connection too.”

David Bitan spoke about the importance of the book “Zionism Against All Odds”. According to him, this is a publication based on historical facts, which emphasizes the importance of Aliyah and Zionism, the first ties with Georgia and hitherto unknown remarkable events. He also noted that the presentation of the Jewish edition of the book was a success in Jerusalem, on Mount Herzl, and today it is a table book for many Jews. This book teaches both Israelis and Georgians a lesson in patriotism. 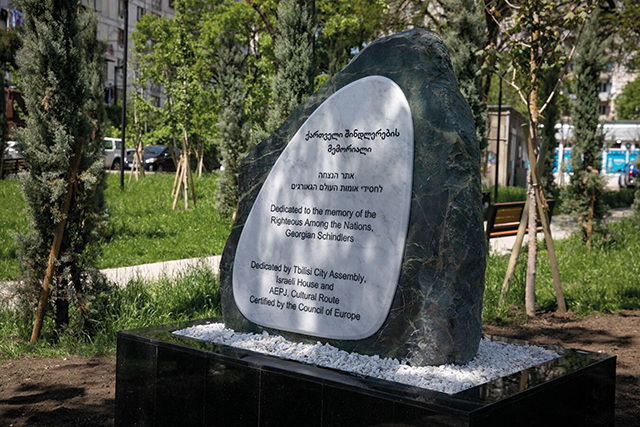 According to the Israeli parliamentarian, it is gratifying to see the friendship made between the Israeli city of Rishon Lezion and the city of Akhmeta in the most beautiful part of Georgia, Kakheti. “We are ready to contribute to the popularization of this city’s potential,” he said.

According to Raz Kinstlich, Mayor of Rishon LeZion, what is being done in the context of relations with Israel at the initiative of Israeli House proves once again that this is a friendly country to Israel. “David Bitan, who was the deputy mayor of our city before becoming an MP, assured me that we are coming to a friendly country and we should help strengthen ties with the cities through brotherhood. Akhmeta, like our city, is a city of vines and wine, so we decided to make friends with it. Our relations will be multifaceted – culture, tourism … we will introduce the history of our city, we will popularize the potential of Akhmeta municipality in Israel,” Kinstlich said, and expressed readiness to invite the Mayor of Akhmeta to Israel. “We will present to him the technologies available at Rishon LeZion, which will serve the advancement of the city. I am confident that this cooperation will be fruitful,” he noted.

At the end of the meeting, Itsik Moshe said that the organization also has international plans. In particular, in July, the organization plans to organize an event, about anti-Semitism, in Jerusalem; in November, Israeli House will participate in a meeting of Israeli lobbying organizations; and in January 2023, at the initiative of Israeli House, a memorial for Babi Yar victims will be erected in Rishon LeZion.