Israeli Amb: Friendship between Georgians & Jews as Strong as Ever 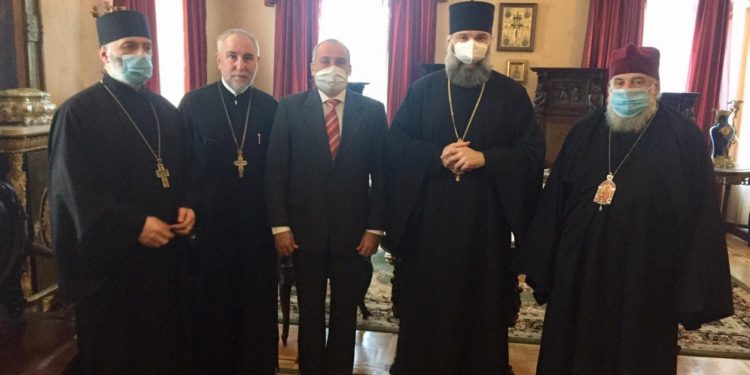 The Ambassador of Israel to Georgia, Ran Gidor, has responded to the statement of the Metropolitan of Georgian Orthodox Church, Bishop Ioane Gamrekeli of Kutaisi-Gaenati Diocese, made at a sermon at Bagrati Cathedral on 20th December, which might have lent itself to various interpretations – some of them of particular concern.

However, at the same time, the Ambassador claimed that for that reason, he was heartened to read his public explanation on 31st December, in which he clarified his original meaning, reiterated his respect for the Jewish people and rejected anti-Semitism.

“Georgia has been a welcoming home to a thriving Jewish community for over 2 millennia, and our Georgian friends and partners have always taken justifiable pride in the fact that anti-Semitism has barely existed in their country. Therefore, the timing of this message of tolerance by the Georgian Orthodox Church is particularly important, as it comes less than a month before the International Holocaust Memorial Day (27th January), and several weeks after Israel – the Jewish State – has generously donated funds & equipment to the Georgian Red Cross Society, the Georgian NCDC and the Georgia office of the WHO in order to help fight the COVID19 pandemic.

“It is important to welcome the new year with this public reassurance that the friendship between Georgians and Jews is as strong as ever, and that anti-Semitism, racism and bigotry have no place in Georgian society,” Ran Gidor said in a public statement.

Earlier, Bishop Ioane Gamrekeli of Kutaisi-Gaenati Diocese has released a statement, explaining the actual meaning of his words and claiming that the Institute for Tolerance and Diversity has changed the context of the December 20 sermon, aiming to create tension around the church.

“I am saddened by the assessment made by the TDI (Institute for Tolerance and Diversity) based on the December 20, 2020 sermon. Of particular concern is the statement by the organization that Christians have persecuted the Jewish community for centuries, but do not indicate either the country or the century, where and when it occurred. Such a general statement is an insult to the Georgian Orthodox Church, which has never taken part in such an action.

“Apart from a few historical facts, the sermon did not concern the Jewish community, but the TDI format organizations operating in modern Georgia. It can be said that by commenting on phrases taken from the sermon without context, it is this organization that is trying to create tension around the church, and this is not the first case,” he said.

“Belief is not characterized by ethnicity. For Christianity, it is especially unacceptable to separate believers on the basis of nationality. In the Georgian reality, especially warm and friendly relations with the Jewish people are known to everyone. The role of the church in this is undoubtedly great and therefore it is completely unacceptable to accuse the church of not being alienated from anti-Semitism. I would also like to add that if anyone saw in my sermon an attempt to insult the Jewish people, I did not mean anything like that and, of course, I consider that any insult on national grounds, including the Jewish people, who are especially close to us, is inadmissible,” he added.