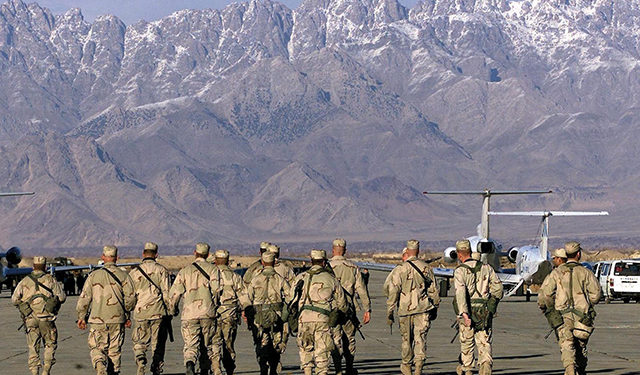 Deeply plunged in and helplessly stuck with another Afghan crisis, the United States of America, the greatest helper and facilitator of all time, today might feel like going back to Washingtonian caution ‘to avoid permanent alliances with foreign nations by steering a neutral course and setting aside violent likes and dislikes of foreign nations’, this ingenious word of warning having served the then young republic for 150 years as an ‘inspiration for American isolationism’.

The feeling is made stronger by the botched withdrawal from the war-torn country, the hampered cleanup of backlog and the worsened security situation. This is probably the time of all- American wistful thinking to heroically conclude the danger-ridden getaway like it is done in the Hollywood superhero war movies where the invincible American troops triumphantly wrap up the epic military operation, rescue the endangered men and women, and happily return home with slightly injured bodies and a clean conscience.

The current situation in Afghanistan is the consequence of the twenty-year old story of some terrorist, or call him, if you wish, the fighter for the Muslim cause, who gave birth to the painfully memorized 9/11 tragedy. The 3000 victims of that attack were clearly asking for revenge. I was in America at the time, sitting in my office and watching it live on the television in Arlington. I still hear President Bush’s pledge, periodically resounding in my ears – ‘We will prevail.’ And they did: Bin Laden and his associates were taken out as a result of several years of overzealous attempts, having curbed terrorism to a certain extent, costing America twenty years of the country’s life spent in pursuit of the lofty goal, 7000 lives lost in anti-terrorist military operations in Iraq and Afghanistan, and one trillion dollars of military expenditure. On top of all that, approximately 177,000 national military and police from Afghanistan, Pakistan, Iraqi, and Syria allies died, starting with the 9/11 attacks and ending with President Biden’s withdrawal of American troops from the country.

Ideally, the much-spoken-about withdrawal should have been a friendly and peaceful kiss-off between the duly appreciated Americans and just as duly appreciative Afghans, who were gullibly expected to duly maintain and protect the best results of the long-sweated American financial, military and enlightening efforts in the name of the democratically developing Afghanistan with all its modern ramifications in every walk of life, involving hundreds of thousands of the Afghan people, especially the young.

But, behold, the opposite happened: the country was taken over in a matter of days by the Taliban, the fundamentalist Muslim movement, with zero resistance on the part of the American-trained Afghan military personnel, who were expected to fight the Taliban to the last drop of blood if bloodshed was necessary. So it’s done, and there is no way to reverse the runaway gloomy process.

Now, the question is if this momentarily metamorphosed socio-political situation in the reinvented Afghanistan might have any impact on our Georgia, provided America changes its image as an international player, making a choice between the current active interventionism and the imaginable passive isolationism. What happens to Georgia is certainly a matter of minor interest to the rest of the world, but the potential model of the Russian and Chinese behavior in the wake of the ongoing Afghan commotion has already instigated a great deal of curiosity worldwide, including Georgia’s politically opposed forces. It is not yet clear what would happen to the Russian and Chinese geopolitical appetites towards the territories they have long considered as their backyard. One of the most pathetic issues of the withdrawal is the sophisticated weaponry left in Afghanistan by the retreating American soldiers.

What will happen to it? Will it rust and rot or be sold to third parties like China, Russia or others? What if it is used against America some bad day in the future? Part of the problem could be the possible loss of faith in the American peace and stability potential. We might as well witness the taking hostage of some of those innocent Americans and the execution of Afghan collaborators. What about the seekers of asylum in skyrocketing numbers? All this is just a presumption which nobody wants to see as something happening in fact.