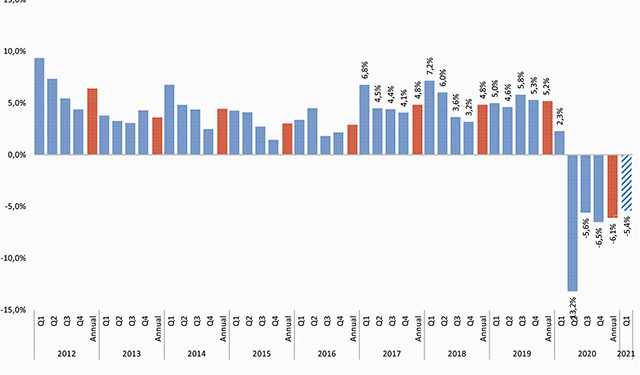 ISET-PI has updated its real GDP growth forecast for the first quarter of 2021. Here are the highlights of this month’s release:

HIGHLIGHTS
• Geostat has published its rapid estimate of real GDP growth for the fourth quarter of 2020, and their estimated growth stands at -6.5%, which is 1.3 percentage points below the ISET-PI’s most recent forecast.
• The annual real GDP growth in 2020 amounted to -6.1%, which is 0.6 percentage points lower than our recent prediction. Economic activity fell sharply due to the global pandemic, although the decline was mitigated by the relatively strong fiscal stimulus and lending.
• Thus, the growth forecast for Q1 of 2021 was revised downward to -5.4% from -3.5% in January.
• According to the recent Monetary Policy Report of the National Bank of Georgia (NBG), real economic growth forecast for 2021 revised downward from 5% to 4%. This growth prediction is based on assumptions that epidemiological situation will improve, the tourism sector will gradually begin to recover in the second half of the year, and, overall, the Georgian economy will manage to recover partially from the pandemic-related economic losses (baseline scenario). While in the pessimistic scenario, with more prolonged and severe economic crisis, which might be a result of a slow vaccination process (compared to the national plan of vaccination) and/or restraint of international travel due to the fear of virus, the real GDP growth forecast downgrades to 1%.

Secondly, looking at the economic landscape from the standpoint of the December data, several variables changed significantly and affected growth predictions in different ways.

External Merchandise Trade.
In December, Georgia’s exports experienced a 17.7% annual decline. This drop was driven by a reduction in the re-export of motor cars and trucks from Armenia, alongside the declining re-export of motor cars from Azerbaijan; export/re-export of motor cars and trucks, electrical transformers, and natural grape wines to Kyrgyz Republic; and export of copper ores and concentrates to United States. There was, however, a slight increase in the export of natural grape wines, alcoholic beverages and chemical fertilizers to Ukraine; and export of raw gold to Switzerland. Overall, re-export of vehicles other than railway or tram rolling-stock has the highest negative contribution to the export decline (-16.4 ppts), and export of iron and steel was the second largest category in this regard (-6.4 ppts). While beverages, spirits and vinegar (1.9 ppts); edible fruit and nuts, peel of melons or citrus (1.9 ppts); and pearls, precious or semi-precious stones (1.7 ppts) had the highest positive contribution.

During this period, the import of goods decreased by 17.9%, driven by a reduction in petroleum and fuel product imports from Russia and Azerbaijan (mostly due to a significant annual reduction of crude oil prices on the international market). Among other negatively affected imports were: carbon steel rods and frozen meat of cattle from Ukraine; motor cars and wires from Turkey; motor cars from USA and Japan; copper ores and concentrates from Peru and Australia. In contrast, Georgian imports of copper ores and concentrates from Chile; and imports of medicines and medical equipment from Netherland experienced yearly growth. Consequently, the trade deficit shrank dramatically by 17.7% yearly, and amounted to 473.3 million USD. Overall, trade related variables had a positive contribution to the GDP growth forecast.

International Visits and Tourism.
Tourism arrivals and receipts declined sharply as a result of numerous travel bans, as well as precautionary behaviors on the part of potential tourists. In December, the number of international visitors decreased by 90.8% yearly (driven by Russia [-11.4 ppts], Azerbaijan [-22.2 ppts], Armenia [-23.4 ppts], Turkey [-11.4 ppts] and EU [-3.1 ppts]), while the decline in tourist numbers (visitors who spent 24 hours or more in Georgia) amounted to 85.8%. Overall, dramatically declining numbers of visitors and tourists, along with a sharp decrease in touristic spending has made a significant negative contribution to the growth forecast.

Real Effective Exchange Rate.
In November, the Georgian Lari real exchange rate sharply depreciated in monthly terms against all main trading currencies. The Real Effective Exchange Rate (REER) depreciated by 2.9% relative to the previous months, and also by 7.4%, relative to the same month of the previous year. Notably, the lari real exchange rate depreciated with respect to the euro and the US Dollar by 3.3% and 0.4% respectively in monthly and by 17.1% and 10.7% respectively in yearly terms. REER also depreciated with respect to the two major trading partners – Turkey and Russia by 4.6% and 4.9% respectively in monthly terms and appreciated by 4.4% and 1.7% in yearly terms.

It is also notable that the Monetary Policy Committee (MPC) of the National Bank of Georgia (NBG) met on December 9, 2020 and February 2, 2021, and decided to keep its Policy Rate unchanged at 8%. The committee has taken into consideration a significant increase in prices in international commodity markets, persistent upward pressure on inflation due to rising production costs stemming from prolongation of pandemic-related restrictions and depreciated exchange rate, uncertainty related to the recovery of global economic activity. In addition, the downward impact of weak aggregate demand on forecasted inflation is weakened by the depreciation of the nominal effective exchange rate, while the high dollarization of the economy fortifies the transmission of exchange rate fluctuations to inflation.

Depreciation of the REER is typically associated with domestic export goods gaining competitiveness on the foreign markets, but it also translates into increased prices on imported goods. Overall, REER-related variables had a small negative contribution to the real GDP growth projections.

Inflation.
In December, the annual inflation of consumer prices amounted to 2.4%, which is only slightly lower than the targeted 3%. However, relatively low level of inflation over the last two months is related to the government subsidy of utility fees (which reduced annual inflation rate by 1.9 ppts). Approximately 1.9 percentage points of CPI inflation were related to higher food prices, which increased 6.7% annually (of which 0.8 ppts are related to cheese and oil prices), while tobacco prices contributed 0.4 percentage points. However, decreased oil prices made a notable negative contribution (0.6 ppts) to the annual inflation measure. The latter trend is mostly a reflection of significantly weakened oil prices on the global market (Euro Brent Spot Price (COP) decreased by 25.7% yearly). Meanwhile, the measure of core inflation amounted to 4.9%. Overall, CPI related variables had a slight positive contribution to the GDP forecast.

World prices.
The other variables to have a negative contribution on the growth figure are the Metals Price Index (PMETA), and the Agricultural Raw Materials Index (PRAWM). In December, metal prices, in annual terms, increased by 28.6%, while the price of agricultural raw material prices increased by 6.4% in annual terms. Adding the PMETA and PRAWM indicators to the model decreases the growth forecast for the first quarter of 2021.

Business and Consumer Confidence.
In the first quarter of 2021, ISET-PI’s Business Confidence Index (BCI) increased by 32.1 index points reaching to 3.4 points after a significant deterioration in the previous quarter. Business confidence improved across all sectors, except retail trade, with the largest increase observed in the construction sector. The positive change in BCI, for Q1 2021, is driven by optimistic future expectations and improved past performance. The Past Performance Index, which considers the business sector’s assessment of their own economic performance in the previous quarter, increased by 12.4 points compared to Q4 2020, and reached -29.2 for Q1 2021. The construction sector has the greatest improvement in past performance.

The Consumer Confidence Index (CCI) has declined slightly after a recovery that lasted about 6 months. In December, the index dropped by 5.5 index points and the pattern is similar for both sub-indices: Present Situation Index went down by 5.4 and Expectations Index by 5.6. Increased daily cases of the COVID-19 led us to maintain the same level of restrictions (public transport did not resume working, shopping malls were closed, etc.) that had significant social costs for the Georgian population, has disrupted New Year celebrations in Georgia and has soured consumers’ moods.