ISET Economist | Desertification in Kakheti – a Threat to Kakhetian Agriculture? 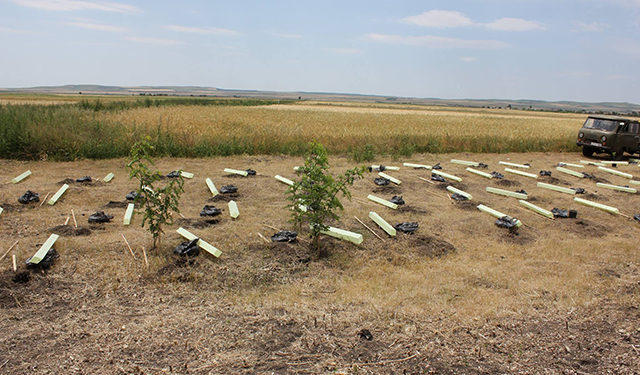 Kakheti is one Georgian region that is economically dependent on agriculture. According to data from the Agriculture and Rural Development Strategy 2021-2027, 40.1% of Georgia’s agricultural lands are within Kakheti, where its largest areas are arable lands, pastures, and vineyards, making it the leading region in the production of cereals, livestock, and wine. In 2020, wine production in Kakheti alone accounted for 75.5% of all the wine produced throughout the country.[1] Unsurprisingly, Rtveli – a traditional vintage and rural harvest holiday, accompanied by feasts, musical events, and other celebrations – is closely associated with the region. While wine and related products remain some of Georgia’s most exported agricultural commodities, amounting to 10% of the total export in 2020.

Agriculture has long been listed by the National Communication Documents of Georgia to UNFCCC as among the sectors vulnerable to climate change, and Kakheti has been identified as especially susceptible to the risk of desertification. Since desertification would have tangible negative effect on the Kakhetian agricultural sector and its economic activity, it is important to have a closer look at the current and future trends of weather patterns in the region.

The risk of desertification is typically discerned by rising temperatures and declining precipitation rates. The Fourth National Communication of Georgia reveals that increased average temperatures have already been observed – in every season – in Kakheti (+0.31℃ in the spring, +0.94℃ in summer, +0.60℃ in autumn, and +0.30℃ in winter). Furthermore, as can be seen in Table 1, temperature increases are predicted to continue into the future, right until the end of the century.

As one can gauge from Table 2, precipitation patterns are also concerning. The annual amount of precipitation in Kakheti declined by 1.5% yearly from the period of 1986-2015 compared to 1956-1985; significantly decreasing in summer, and slightly increasing in the other seasons. Additionally, forecasts included in the Fourth National Communication indicate that this negative trend is expected to continue to a greater degree in the future.[3]

Finally, during spring and early autumn the number of dry days in Kakheti has also been increasing. The annual and spring increase was 6-9 days and 4-5 days, respectively, compared to the 1990s (MEPA, 2021). Thus, Kakheti suffers with a lack of precipitation even during the vegetative period (April-September).

Consequently, it becomes important to question why these trends are alarming. It is notable that they indicate a heightened risk of drought affecting the region. The negative impact of droughts may subsequently fall on agricultural harvests, water and food deficits, and dust storms in desert and eroded areas.

According to the Georgian Farmers’ Association representative,[6] the Fourth National Communication Document, and the Kakheti Regional Development Strategy 2014-2021, the risk of desertification is fairly severe in the municipalities of Dedoplistskaro and Akhmeta.[7] On the ground, because of rising temperatures and decreased levels of precipitation, those landowners that years ago never established irrigation systems are now considering such installations.

Various steps have been taken, over time, to mitigate the effect of climate change on agricultural products. A good example is the gradual implementation of the activities defined in the Second National Action Program to Combat Desertification. This program includes awareness raising about the problem and an evaluation of the components of agrobiodiversity, such as genetic resources of plants and animals, pest management, and nutrient cycles. Additional proactive measures have also been taken by private entities, for instance the installation of drip irrigation to reduce the risk of land degradation;[8] some of which were supported by governmental programs, such as “Plant the Future”. Nevertheless, the scale of these existing interventions still appears to fall short of the requirements, both in Kakheti and in the rest of the country.

Researchers generally agree about the importance of promoting a “culture of prevention”, one which would encourage the conservation of drylands and alternative livelihoods (Adeel, Safriel, Niemeijer, & White, 2005, p. 14). These can be effectively achieved through large-scale investments into climate change resilient technologies in the agricultural sector. Despite the costs, the prevention of desertification is far easier and less costly than the rehabilitation of desert lands.  Moving towards this, however, requires both management and policies that would encourage the use of sustainable resources.

There are several actions that could increase the resilience of Kakhetian agriculture to climate change (desertification in particular):

Firstly, increasing investments towards irrigation systems. Specifically, according to the stakeholders’ consulted, the construction of a reservoir could partially solve the problem; by accumulating water from the Alazani River during winter when the resources are not being used, for later use in the summer. Yet this would necessitate efficient planning: one should, for instance, devote attention to investments in water tracking to measure accurately water flows, quality, storage, and uses. Adopting new technologies, such as automated gaging and remote sensing, could also prove a helpful way to monitor and predict the flow of water, and therefore to allocate water appropriately during vegetative periods.

Finally, it is pertinent to plant and disseminate climate resilient crops and species, those which can be effectively grown in less preferrable conditions and which require less water for survival.

In summary, since temperature increases and reduced precipitation levels each represent an increasingly likely future for Kakheti, and moreover constitute a threat to its agricultural sector, it is advisable that the steps included in National Action Program to Combat Desertification proceed at an accelerated pace. Among these, certain preventive activities should be promoted to the highest priority since they potentially provide less costly and more beneficial solutions.

[2] Monthly temperature values were recorded at stations (Dedoplistskaro, in the Kakheti region) in June, July, and August 2015, with the maximum and minimum predicted values for the same stations in 2050, 2070, and 2100.

[3] Kvareli is an exception with 700 mm of atmospheric precipitation.

[4] As expressed in millimeters (mm) of height or depth of precipitation.

[5] The table shows the average precipitation rates recorded at stations (Dedoplistskaro, in the Kakheti region) in June, July, and August 2015, and the change in precipitation predicted/estimated by means of comparing meteorological data for 2041-2070 (the first forecast period) and 2071-2100 (the second forecast period) with the respective factual baseline data for the same stations from 1971-2000.

[6] The consultation was conducted with the deputy chairman of the Georgian Farmers’ Association.

[8] There are a number of screening reports describing the installation process of such systems on the official Ministry of Environment Protection and Agriculture website.