Is the Sovereignty Issue Dead or Still Alive? 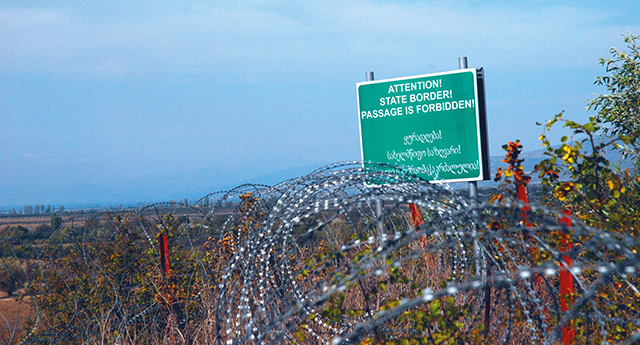 Going by the frequency and intensity of the grassroots-level discourse that our society is dedicating to current political problems, the overall impression is that the issue of Georgia’s territorial integrity is no longer as hot as it used to be, say, 10-15 years ago. Many people I have talked to tend to apologetically suspect that the question might still be unconsciously painful, but in reality, not as scorching as it was before. Why? What happened? Has anything changed in our wounded patriotic hearts and minds?

We see hundreds of emotionally poignant speakers on TV, and thousands of animated participants in street demonstrations who, foaming at the mouth, promote the cause of the territorial integrity of other nations, seeming to have forgotten the exigencies of their own territorial wholeness. Those overexcited indoor and outdoor orators scream for the ousting of the current Georgian government, as if the most burning and longstanding national issue of territorial completeness no longer matters. The selfsame talking heads dictate to their credulous and naive addressees that being a candidate for membership in a couple of active, and certainly useful, western geopolitical organizations is much more important than getting back the cherished one-third of our deplorably shredded territory, lost, by the way, only because of the strong-headed pursuance of the unlikely geopolitical goals of our not so very far away past.

Generations have grown up in Georgia since those insurmountable territorial losses who are not even familiar with the problem, their indifference to the topic being an imaginable harbinger to other national tragedies that might be in store for us if we do not behave accordingly. Unbelievably, the people of Georgia and their current leaders have stopped openly, straightly and profusely talking (as they did in recent times) about the main issue of our reality, called territorial integrity. It seems the theme of Georgia’s territorial integrity has lost its value. This is why the running politicians have stopped using it in their electoral campaign. Promises of restoring the country’s territorial integrity have always helped them to be elected. The worst part of this newly born nonchalance is that the old problem might be hushed with a purpose so as to not be given a chance to be exacerbated to the detriment of other goals that have become predominant on our national list of items that need to be heeded. Our western friends and well-wishers are being overly ginger about the whole thing, as if bringing back the discussion of the problem might be conducive to the collapse of what they have been building in Georgia over the last several years. I can understand them. Who needs that much headache?

I might be a little out of the swim at this time in resuscitating the forgotten dilemma, not letting sleeping dogs lie in peace, but I would rather be clear about the whole thing than at a loss. I just want to know for sure if the problem is closed or still alive, having at least a slightly felt pulse. And clear I want to be, because I need to be oriented on something true to work on, as a minor but an active partaker in our political life. There must be others out there who need wise instruction of that content and caliber too. To be living in deliberate oblivion of the bad things in the way of our feeling good about life is of course sweet and soothing, but our being oblivious of those still-alive troubles doesn’t make them vanish without trace.

So, let’s hear something comforting and encouraging from our specialists thereof although they are usually very far from infallibility. And if the nation has reconciled itself with the long-tolerated hateful status quo, knowing that for sure, I will at least have a chance to put myself together for further tactful and correct journalistic actions and deliberations. After all, we all need to walk with open eyes so as not to trip over accidental rocks and unknown pebbles on our tortuous road to the unsavory truth.