Iran, the Russian Invasion of Ukraine, and a New World Order 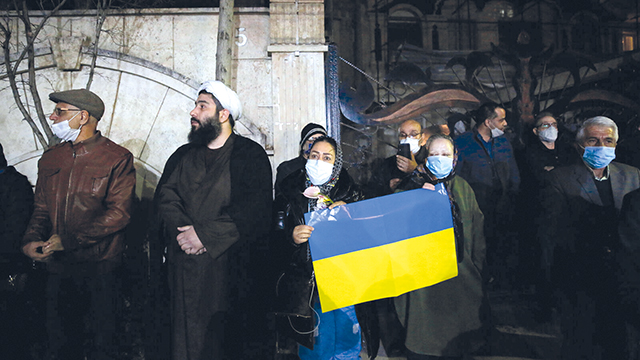 Demonstrators expressed solidarity with the people of Ukraine and chanted “death to Putin” outside the Ukrainian Embassy in Tehran. Source: AP

The Russian invasion of Ukraine is set to change the security architecture in the wider Black Sea and Europe. Repercussions will likewise be felt across the Eurasian continent, where Iran is particularly watchful as the Islamic Republic aligns with Russia on critical questions relating to the present world order, but also fears Moscow’s play with separatist entities.

Anticipating a New World Order
For Iran the invasion of Ukraine is closely related to the very essence of the present world order. Like Russia, albeit at times with much greater rigor, Iran has been voicing its discontent at the way the international system has operated since the end of the Cold War. More broadly, Iran and Russia see the world through a strikingly similar lens, and both cherish the oncoming multipolar world where the collective West’s geopolitical preponderance will finally come to an end.

Iran had its reasons to think this way. The US’ unipolar moment provoked deeper fears in Tehran of imminent encirclement by American bases in Afghanistan and Iraq. Like Russia, the Islamic Republic has been viewing itself as a separate civilization which needs to be not only acknowledged by outside players, but also be given appropriate geopolitical space for projecting its influence.

Both Russia and Iran are deeply religious about their respective spheres of influence. For Russia, it is the territories that once constituted the Soviet Empire. For Iran, it is Iraq, Syria, Lebanon, and Yemen. When the two former imperial powers have overlapping strategic interests, such as in the South Caucasus and the Caspian Sea, they apply the concept of regionalism. This implies blocking non-regional powers from exercising outsize economic and military influence, and mostly revolves around an order dominated by the powers which border on a region.

This largely explains why for Iran, the Russian invasion of Ukraine is an opportunity which could hasten the end of the liberal world order. It also explains why Tehran has been largely toeing the Russian line of explaining the motives behind the invasion. The expansion of NATO into eastern Europe was cited as a reason sparking the Russian moves. “The root of the crisis in Ukraine is the US policies that create crisis, and Ukraine is one victim of these policies,” argued Supreme Leader Ayatollah Ali Khamenei following the invasion.

To a certain degree, Iran’s approach to Ukraine has also been influenced by mishaps in bilateral relations, which largely began with the accidental downing of a Ukrainian jet in January 2020 by the Iranian side. Initially denying it, Tehran later admitted that the shooting down happened because of human error. The Ukrainian side contested reports provided by Iran and even accused Tehran of a premeditated “terrorist act committed against a civilian aircraft.”

For Iran, the ideal scenario would have been to have a quick and effective invasion where Russia had achieved its major goals. This protracted war, however, means that the liberal order has not been in such a steep decline after all, and Russia’s calls for a new era in international relations have been far from realistic. The unsuccessful war also shows Iran that the collective West has the power and ability to adjust and muster energies to defend the existing rules-based order. The sanctions imposed on Russia also highlight the West’s ability to sacrifice the benefits of economic partnership with Russia. In other words, Moscow’s failure in Ukraine actually strengthened the West and made it more united than it has been since the September 2001 attacks on the US.

The re-invigorated liberal order matters for Iran because of its own troubled relations with the collective West. The ongoing negotiations on the nuclear deal will be heavily impacted by how Russia’s war proceeds and how the US and the EU continue to respond to the aggression. Tehran fears that a losing Russia might use its critical position in the nuclear talks to endanger the process. Additionally, the West, in pressuring Moscow, is highly interested in reaching a deal and thus negate Russia the significant bargaining advantage it holds.

The Limits of Embracing Russia
Despite rhetorical support for Russia, Iran is also careful not to overestimate Moscow’s power. It is clear that in the longer run, the Kremlin has failed to achieve its long-term goals of safeguarding its western frontier. The imposed Western sanctions are likely to stay for a long time, and Russian economic stability, despite seeming stout, is overall illusory.

Moreover, Russia’s multiplication of separatist entities (following the recognition of Luhansk and Donetsk’s independence) is a highly polarizing subject in Iran. True, there has been a shift toward embracing Russia’s position over Ukraine, but Tehran remains deeply committed to the “Westphalian principles” of non-intervention and territorial integrity. Russia’s moves in Georgia in 2008 and Ukraine in 2014 are thus deeply uncomfortable developments for the Islamic Republic, which itself has struggled against potential separatism in the peripheries of the country.

Many in Iran also sympathize with what Ukraine is going through, as the Russian invasion evokes Iran’s defeats in the early 19th century wars when the Qajars had to cede the eastern part of the South Caucasus to Russia. The invasion also hits home because of the historically deeply rooted anti-imperialist sentiment in Iran.

Therefore, similar to earlier policy, Iran is expected to largely abstain from endorsing Russia’s separatist ambitions in eastern Ukraine. It will also eschew, where possible, supporting Russia in international fora. Emblematic of this policy was the March 2 meeting in the United Nations General Assembly when Iran, rather than siding with Russia, abstained from the vote which condemned Moscow’s invasion.
Russia’s poor military performance, and the West’s ability to act unanimously, serve as good experience for the Islamic Republic as to how much pressure it can incur in case of ratcheted up Western pressure. But most of all, like China, Iran benefits from the war, as it largely represents a Western war, a conflict where Western powers fight each other and quite naturally serves as a distraction from Iran’s ambitions.