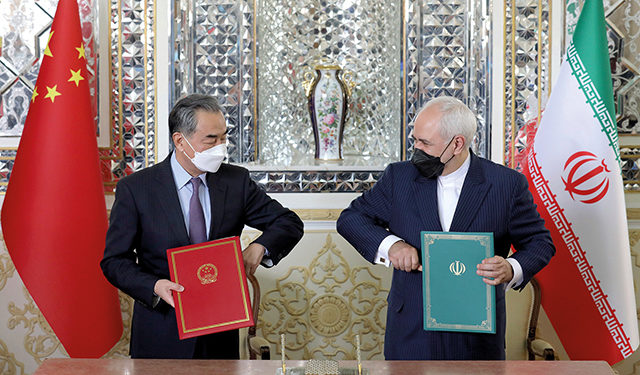 China and Iran signed an expansive deal in Tehran on March 27 this year. Neither Iranian nor Chinese leadership revealed the details of the agreement, but analysts suggest that it was largely along the lines of a leaked 18-page draft published last year by The New York Times.

To remind the reader, the draft detailed a potential $400 billion of Chinese investments in Iran’s oil and gas industries, telecommunications, ports, railways and other sectors over the next 25 years. China, in return, would receive Iranian oil under preferential terms. This could signal that China, despite heavy US sanctions, will still involve itself in Iran. Indeed, Tehran needs Beijing, as economic sanctions have decimated Iran’s oil and gas industries.

The draft also mentioned deepening military cooperation between the two countries. This included joint exercises, military research and intelligence-sharing. China has conducted two naval drills with Iran and Russia within the framework of fighting piracy and counterterrorism – a subtle indication of Chinese involvement in the safety of oil trade routes from the Middle East to the Indo-Pacific region.

But to look at China’s moves solely from the perspective of its agreement with Iran would not help in revealing the whole picture. Beijing has set its sights on the Middle East overall. The Iran agreement does not mean cooperation only with the Islamic republic or treating it as China’s most preferred nation in the region. For Beijing, Iran is but one player on the chess board. Take the most recent example. China’s Foreign Minister Wang Yi toured the Middle East in March, covering Saudi Arabia, UAE, Turkey, Oman, Bahrain and Iran. Limiting itself only to Iran would not be beneficial to Beijing specifically, as other regional powers also look up to China for potential investments and are also in the midst of the US re-evaluating most facets of its policy in the Middle East. Just a small indication of China’s region-wide vision is that it is even ready to play host to direct talks between the Israelis and the Palestinians. China Daily, an organ of the Chinese Communist Party, reported that Minister Yi unveiled a five-point plan “for achieving security and stability in the Middle East by offering constructive boosts to the Palestine-Israel dialogue, resuming the Iran nuclear deal, and building a security framework in this region”.

What analysts forget is the Russian dimension to the burgeoning China-Iran relations. Russia-China relations enter a new era of cooperation in nearly all areas. Yes, China is much stronger in pure economic terms, but both sides are eager to highlight the evenness of their partnership. Contrary to Central Asia or the Arctic region, where China and Russia are more likely to compete, the Middle East could be an area where Russia and China would cooperate. For Russia, Chinese influence in the volatile region would help diminish the West’s geopolitical ambition. So long as the West-Russia rivalry continues, Chinese influence will be welcomed by Moscow and regarded as a necessary component to balance the West, and in some cases even squeeze it out entirely. What we see in many regions across Eurasia is that Russia works closely with various regional actors to keep the West at bay.

Therefore, growth of China’s clout via the deal with Iran, in some way, would be beneficial to Moscow and would serve the same purpose of sidelining the collective West in the Middle East. A certain, unofficial, triple partnership might be emerging between Russia, China and Iran. In the longer term, though, Russia might be also worried that all the lucrative investment opportunities in Iran could be taken by Chinese companies. But this would not be a serious irritant in China-Russia ties.

True, the Iran-China agreement gives Beijing a geopolitical edge, but it could be argued its advantages are for the moment more rhetorical. The implementation of the deal is unlikely to be easy, as China’s commitments seemingly have various ‘strategic exits’ to safeguard its investments.

Following the signing ceremony, the Chinese Foreign Ministry spokesperson Zhao Lijiang said that “the plan focuses on tapping the potentials in economic and cultural cooperation and charting a course for long-term cooperation. It neither includes any quantitative, specific contracts and goals nor targets any third party, and will provide a general framework for China-Iran cooperation going forward.” This suggest that the agreement is more of an umbrella with no agreed specifics, while the $400 billion figure is still speculative.

Perhaps analysts are pushing too hard for the China-Iran agreement to be seen in superficial grandiose terms. After all, the Iranian government spokesperson Ali Rabiei said the agreement was “not an international treaty, or agreement, and does not require parliamentary approval under this legal interpretation”. The agreement could be seen as largely aspirational and might be even labelled as a road map similar to that which China signed with several countries across the Middle East. Over the past several years, China has signed cooperation deals with Iraq, Saudi Arabia and the United Arab Emirates. Why should the agreement with Iran be any different?

Even if the agreement has no immediate military impact, it still might represent a major strategic shift. India and the US should be most worried. Delays in the China–Pakistan Economic Corridor (CPEC) projects in Pakistan may propelled China’s growing interest in infrastructure investments in Iran. Pakistan’s Gwadar port, which China manages, provides it with a shorter route for oil imports from the Gulf vis-à-vis the sea route through the Malacca Strait. Beijing sees Chabahar port in Iran complementary to Gwadar, and perhaps as a part of its string of pearls in the Indian Ocean. India should be concerned because in the longer term, it could be pushed to the corner or squeezed out entirely from major projects in Iran. As the agreement will likely give China access to Iran’s naval base at Jask, outside the Persian Gulf, it will allow Beijing to constrain India’s plans to develop Iran’s port and Delhi’s ambition to build a rail-road access to Central Asia.

For the US, the effects of the agreement are not yet entirely clear, but no-one can ignore the fact China has acted at a time when the US was winding down on its presence in the Middle East, and during the Trump presidency some core aspects of America’s ties with the Arabs were questioned. It is also a time when neither Russia nor Europe can play a decisive role in the region either politically or economically. China has this potential, and it also has an aura of an evenhanded broker in the region beset by rivalries and heightened sensitivities towards the former imperial powers.