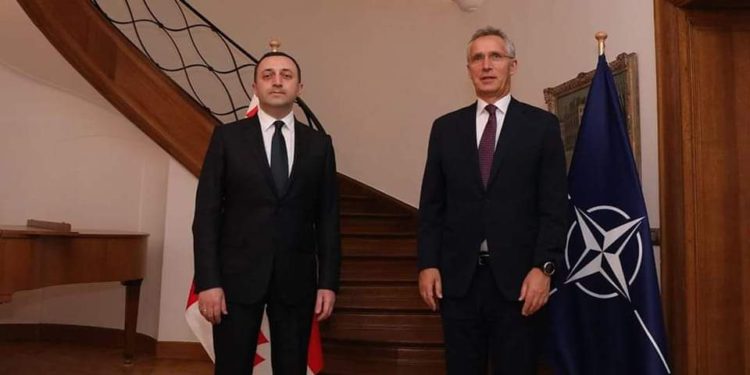 Prime Minister of Georgia Irakli Garibashvili met with the Secretary General of NATO Jens Stoltenberg at his residence during his working visit to Brussels, the press service of the Georgian Government Administration reported.

The meeting once again highlighted Georgia’s Euro-Atlantic aspirations, which is a top priority of the country’s foreign and security policy.

The Head of Government highlighted the close cooperation of Georgia with the Alliance in the process of Euro-Atlantic integration, as a result of which Georgia effectively uses all the practical tools on the path to membership.

The meeting underlined the strong support and close cooperation of both the Alliance and the partner countries towards Georgia’s Euro-Atlantic aspirations. The reforms implemented by Georgia on the way to integration into the Alliance were positively assessed.

“At the meeting with the Secretary General, the role of Georgia as a strong and reliable partner of the Alliance and its important contribution to the process of ensuring global security, as well as ensuring the security of the Black Sea region was reiterated.

“At the meeting, the parties expressed hope that Georgia’s progress and aspirations will be adequately reflected in the Alliance’s decisions in terms of political support for the country’s aspirations and strengthening of its practical capabilities.

“The sides also discussed the issues and expectations in preparation for the NATO Madrid Summit.

“The conversation also touched on the security environment in the region and the war in Ukraine, on which the Prime Minister reiterated the solidarity of the Georgian people towards the Ukrainian people.

“The Secretary General of the Alliance reiterated his support for Georgia’s sovereignty and territorial integrity.

“The Prime Minister of Georgia thanked the Secretary General for his personal efforts and for playing a key role in Georgia’s progress on the path to NATO integration,” reports the press service.