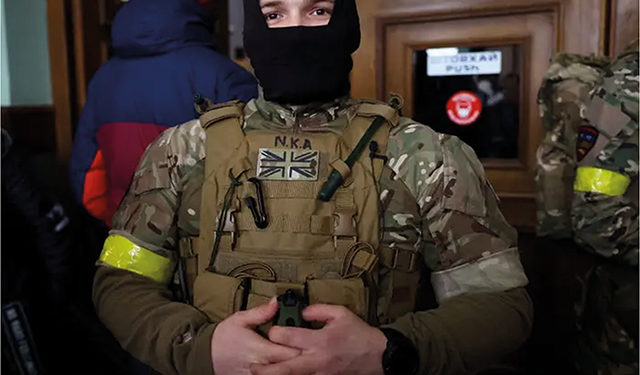 A British foreign fighter waits in Lviv with other volunteers to depart for the front line in eastern Ukraine with the newly formed International Legion of the Ukrainian Armed Forces. By Reuters/Kai Pfaffenbach

The sharp chill of another cold early morning breeze in Eastern Europe brushes across their faces. The smell of cigarette smoke and vehicle exhaust fumes blend together in the air around them. Large military packs and equipment of varying patterns are laden upon their travel-weary bodies. These men have come from a diverse concoction of nationalities, professions, and life stories. In a matter of days – or even hours – they will be armed members of the Ukrainian Armed Forces.

For those of the group coming from traditional military service, things are strange. New procedures, odd inquiries, and questionable practices characterize their travels. They are joining a foreign military service after all. However, unlike other full-time regular members of the army, they will be enlistees of its newest branch: The International Legion of Territorial Defense of Ukraine (ILDU).

On February 27, Ukrainian President Volodymyr Zelenskyy signed into formation this new military unit aimed at bolstering the ranks in the defense against the Russian invasion. As a type of fighting foreign legion style light infantry, the Ukrainian government has already begun moving these new units to the combat zones around Kyiv. Despite this large influx of support, many in the military analytical and academic communities have brought into question the efficacy and morality of this new element.

Comparisons have already been made to similar units from history. While the use of foreign fighters or even mercenaries are not something new to warfare, it is the more recent use in the 20th and 21st centuries that presents an interesting comparison and backdrop. The Garibaldi and Abraham Lincoln battalions of the Spanish Civil War are examples of large international communities flowing into the warzone. Comprising of foreign nationals, they were motivated by a fight for democracy, albeit organized and funded by communist groups.

The foreign fighters in the Spanish Civil War were almost entirely composed of volunteers with no military experience. Focused on recruiting more from those with similar ideological viewpoints, the communist benefactors tended to shy away from diversity. The ILDU has notably been a polar opposite of this, accepting anyone who will fight in the defense of Ukraine. However, this has opened it up for those with extreme and even radical ideologies, leading to the potential for what happened on both sides in the 2014 invasion.

At the outbreak of hostilities in early 2014, both Ukraine and the Russian-backed forces rushed to feed their frontlines with willing volunteers. Among the popular armed groups joining the national defense movement, some extremist organizations formed and armed themselves under the guise of a defense group. Nonetheless, the combined militia and federal forces were able to fight the Russian forces to a stalemate in the east.

A relationship of necessary tolerance was struck as the lukewarm conflict continued along the occupation line. In the aftermath of heavy fighting, the rebuilding and retraining of the regular armed forces meant the usefulness of experienced low-cost units gave way to their normalization. The full potential of the new ILDU units has yet to be seen, but the existence of a large group of socio-politically diverse, combat experienced, and heavily armed volunteers could stand to be a double-edged blade for Ukraine.

While armored and mechanized units struggle, light and irregular infantry fighters thrive in the urban jungle, stripping the advanced force of its advantages

The initial problem for these recruits themselves is the confusion and disorganization in logistics. With both personnel and equipment, reports on the ground from volunteers are somewhat bleak. Confusing orders and administration processes, language barriers, and a portion of the volunteers coming with no military or firearms experience spell out a grim vision of the ILDU. A few volunteers have even refused to serve when faced with these circumstances.

For those volunteers that make it into Ukraine, assigned to combat units, there comes another obstacle many thought would not arise. Some recent reports from Kyiv have said that there have been complications with getting the necessary weaponry for them to begin effective service. One American military veteran stated publicly “It’s a little disorganized. It’s nobody’s fault. They weren’t really expecting to be invaded, to be thrown into a war.”

Despite these logistical bottlenecks, the influx of NATO arms shipments will rapidly fill those gaps, assuming the time is still there. The remaining issue is not with the equipment, but rather with the individual volunteers themselves. Those seeking service in a wartime foreign legion are a hearty bunch. But what was seen in 2014 and in the volunteers that flocked to Syria to combat the so-called Islamic State at around the same timeframe, they bring their own “baggage.”

The inclusion of foreign volunteers in a conflict has typically come with higher than average victimization levels against the civilian populace. Austin C. Doctor and John D. Willingham, both PhDs in Public and International Affairs from the United States, have studied this, saying, “…foreign fighters possess greater capacity for independent agency in war, stepping outside the chain of command to inflict harm against local noncombatants.” This combined with the units becoming a breeding ground for extreme ideologies from volunteers serving solely for the purpose of experience, makes volunteer units a risky business.

It must be noted and stressed that there are very few, if any at all, reports of this conduct by foreign volunteers in Ukraine as of the time of writing. While other studies have noticed raised numbers of reprisal killings, these are skewed by the social, political, and religious landscape of other unrelated conflicts in recent history. In fact, with the circumstances of the conflict and general sentiments in the West, it is worth presuming that this conflict will be a welcome outlier in these statistics.

As a counterbalance to this weight, the increased physical support brings with it a litany of benefits for an embattled Ukraine. With the fighting centered in urban centers, and a potential assault of the megacity of Kyiv, the principles of urban warfare come rapidly into view. This form of close-range, brutal, and hyper-kinetic operations is unique in its nature, as it removes traditional equipment and numerical advantages. Despite the larger Russian numbers, Ukraine still holds the advantage in the broken cities of Ukraine.

We have been putting in our time here, very hard drilling, and are supposed to have learned in six weeks what the ordinary recruit, in times of peace, takes two years to. – Alan Seeger, American poet and volunteer in the French Foreign Legion, 1914–1916

John Spencer, an expert in urban warfare and a scholar with the Modern War Institute at the United States Military Academy in West Point, states this clearly. Spencer outlines that as the attacker, statistically, one requires approximately five times the force numbers of the defender to achieve a tactical victory. With the increasing numbers of ILDU volunteers, the math equation for Russia to seize many of the key cities is becoming a nightmare for their forces.

Additionally, Spencer speaks at length about a simple but effective tool in urban defense: concrete and obfuscation. While armored and mechanized units struggle, light and irregular infantry fighters thrive in the urban jungle. This urban jungle, unconducive to armored units due to the rubble and rough terrain created by the shelling, strips an advanced force of its advantages. The lessons of Pavlov’s House in the Battle of Stalingrad still rings true; urban defenders entrenched incredibly deep and using elevated positions can defy a superior enemy. By both using the physical barriers and confusing layout of a ruined city, and forming strategic choke-points, the agile ILDU can turn Kyiv into a death sentence for the invader.

Another additional aspect of these volunteers is their experience. With many coming from NATO countries having served in operations in Iraq, Afghanistan, and other hotspots around the globe, the knowledge base of the force is expanding. From the urban fighting in Mosul and Baghdad to unconventional warfare across Afghanistan, these veterans bring ideas and methods that the Russian force most likely has never seen, let alone experienced in combat.

Assuming the command and control elements of the ILDU are adequate and confident, the unit poses a significant threat to the Russian force. Despite the Kremlin’s repeated threats about their treatment of “foreign mercenaries” in Ukraine, there has been very little change in the flow of volunteers. The West has pledged a significant base of support; materially, politically, and economically. Now, with new foreign volunteer battalions being organized daily, a de facto NATO force has virtually formed, on its own, to deploy against the Russian bear and its vicious transgressions. Despite Russia’s artillery, often referred to as the “god of war,” the light infantry, the proverbial “queen of battle” may win out in the end.