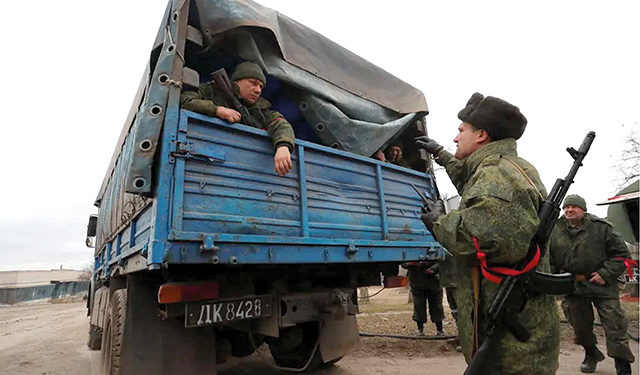 Pro-Russian troops in the separatist-controlled settlement of Mykolaivka, Ukraine, on March 1, 2022. Photo by Alexander Ermochenko/Reuters

Despite a massive build-up of forces, installations, and an influx of materials, the Russian military has reportedly been suffering from a litany of pains during its ongoing invasion of Ukraine. While pushing Ukrainian forces back to the major cities, they have suffered the same plague many armies going back to antiquity have suffered: supply and logistics.
Media and literature often depict the clash of nations as being composed only of valiant cavalry charges, steadfast lines of infantry, or battalions of heavily armored tanks. However, it is the veins and arteries of supporting units behind the lines that make the battles happen. Russia is now finding that the logistics framework for this invasion may not have been adequate enough to allow those battles to continue with the momentum needed.
Food, fuel, and vehicle parts have all come up short for many of the advancing Russian elements, leading to surprising encounters. Russian soldiers have been caught trying to steal local supplies from civilians, or simply surrendering to Ukrainian defenders. In several incidents confirmed by the United States Department of Defense, Russian soldiers have even sabotaged their own vehicles and equipment so as to avoid being sent forward into combat. Many armored vehicles, abandoned by their Russian crew, have been restored by Ukraine.
This logistics oversight is rooted in the pre-conceived vision by Russian high command that Ukraine would fall quickly; that the social, economic, and political environment was unstable and yearning for a return to the heights of the Russian Empire under the tsars. Flowers, bread, and salt as they say, were to be thrown at the arriving liberation force. But as many young soldiers are learning the hard way, this is far from the truth. Instead, it is rifle rounds, anti-tank rockets, and molotov cocktails.
Despite its many flaws, the United States has mastered the art of foreign conflict. Since virtually all combat takes place worlds away from their sovereign soil, the logistics framework of America’s fighting forces must be seamless. Forward bases and depots must be fully capable of restoring a fighting unit’s capabilities at a moment’s notice, and in the event of highly kinetic combat operations, immediately.

What a soldier needs most is two things: a full belly and a pair of shoes – Napoleon Bonaparte

Russia has opted to bank on the concept of blitzkrieg. This idea reduces the need for overwhelming supply in lieu of a swift and sudden victory. Since this is no longer an option and Russian units find themselves fighting a grinding and taxing war, they have been forced to opt for two new options. These options have been broadcast on the social media front of the war; steal from other Russian units, and steal from the enemy.
Images and video of Russian soldiers looting and ransacking shopping markets and family bazaars have made the rounds on the internet. This is an acceptable tactic in disparity, typically used by special operations and recon units in advance of regular forces, separated from normal routes of supply. However, these are Russian regular army units, ones that should be connected to a standard campaign supply network.
These units should be virtually overflowing with an excess of arms, ammunition, water, and food. Ukrainian units have found many of the surrendering Russian soldiers to be suffering from malnutrition, seeking meals and warmth rather than being left with no other option in their own units. Russia has apparently left many of its forces on the front without the framework necessary to adequately provide for these young men.
Lieutenant Colonel, US Army (retired), Michael Phillips, a former logistics officer, frames it as a logistics-based problem, but not something that is suddenly new. This, he states, is something Russia has been building for months, particularly in the northern front. Units advancing from Belarus and western Russia were too far stretched from their original positions, with no advanced logistics bases. Since there was no mid-way logistics and supply point between their forward combat positions and the warehouses where the materials were stored, the units were left waiting as support units scrambled to move product.
In addition to the logistical woes, the Russian force has displayed a surprising distaste for aggression and direct combat. Commanders have limited their exposure and maintained an unusual standoff compared to the image much of the pre-invasion Russian military machine presented to the world. In a recent recruitment video, they likened the honing and training of a Russian service-member to that of the machining and precision in production of a rifle.
On the contrary, this Russian machine has been jammed. Their force has been stalled, clubbed into a protracted fight with asymmetric forces all too happy to fight the long war. These modern partisans have devoured offensive after offensive, consuming more young men of the Kremlin’s order. With everyone having a documentation device, a smart phone, in their pocket, it is all too obvious these Russian fighters have little fight in them.

This kaleidoscope of images, gleaned from intercepted communications, prisoners of war, and encounters by Ukrainian civilians, build a shocking view. Russia, who was marketed on the world military stage as a green monster incapable of defeat and fault, has faltered in a fight with what was supposed to be a lesser opponent. The image that Russia was a first-rate military, on par with that of the United States, the UK, China, and India, quickly dissolved.
Now, with the cities in their sights, the Russian military will have to reckon with popular resistance and the inevitable “nation building” that the United States and NATO struggled with so much in Iraq and Afghanistan. However, unlike the people in those nations desperately trying to work with the current situation, the Ukrainian people are mobilizing against the very institutions Russia is imposing upon them. Forcing an undesirable regime on the very people that threw it off in 2014 is a mixture that only serves to invite another revolt, and, as a result, this will create Russia’s new “endless war” – an “Afghanistan” in Europe’s own back yard.